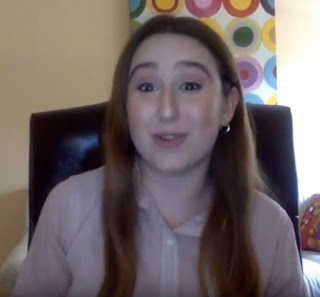 Jordan Lawrence has always connected to her Judaism through music. Now, as the new cantorial soloist for Gates of Prayer in Metairie, she will have plenty of opportunities to connect, and help others do so in the process.

Her selection was announced in a video from Gates of Prayer on April 17.

A New Jersey native, Lawrence arrived in New Orleans as a first-year Tulane student in 2015, becoming involved in campus Jewish life, and musically.

When she got to Tulane, she thought it was incredible that a university with so many Jewish students did not have an a capella choir, as her brother’s university had. That led to the formation of NJBeats, where she was music director for the first two years.

“It was a wonderful experience to provide that for the Tulane community, as well as the greater New Orleans Jewish community,” she said, adding that a mini-album will be coming out soon.

A lot of people misinterpret the group’s name, she said — it is a riff off NJB standing for “nice Jewish boy,” and despite her origins, has nothing to do with New Jersey. Though, she added, “a lot of Tulane students are also from New Jersey.”

She is excited about directing the choir at Gates of Prayer, as she was a self-described “choir nerd” in high school, when she also was on the Bergen County choir and the state choir.

At age 9, she started attending Camp Young Judaea Sprout Lake in New York. “Camp is one of the biggest things that provides happiness for me,” she said. In 2015 she started working at Sprout Lake, starting as a counselor and Israeli dancing specialist. She continued to take on more responsibilities, putting on a musical one year as a transition into running the performing arts program. “It was a very hard decision not to go back” this summer, she said.

A musical theatre major, by her junior year she knew she wanted to stay in New Orleans, and “finding my place here in the Jewish community was extremely important.

For the last three years, Lawrence has been a Shabbat morning educator for students at Beth Israel. She said that is part of how she finds “my niche in every community,” having grown up in a Reform synagogue, attending a Conservative Jewish day school, attending a pluralistic summer camp and having a modern Orthodox rabbi as a brother.

She noticed that in New Orleans, a lot of people are part of more than one congregation. “It’s not something I grew up knowing,” and “it has been really cool to learn about it and be involved.”

Beth Israel has been “such a wonderful community to me,” especially as she does not have family in New Orleans. “They have been so welcoming and inviting.”

Since the shelter in place order, she has done Zoom lessons for Beth Israel on Mondays and Wednesdays.

This year, she has also been a teacher at the Uptown Jewish Community Center’s preschool, and the Jewish enrichment coordinator, “involving music and movement.”

She also did a run of “Oliver” at Rivertown Theatre this year, which by coincidence was the first musical she had ever done. When she was in fifth grade, her brother’s high school had an open audition for younger kids.

More recently, she was to be part of the May production of “42nd Street” at the Jefferson Performing Arts Society. “We had just started rehearsals the week we found out” about the shelter-in-place restrictions. Now that the show is being rescheduled to November, she won’t be able to take part because of her new responsibilities.

When she saw the opportunity at Gates of Prayer, “I thought it would be a perfect fit… this kind of opportunity is great to explore things I love so dearly.”

She will also be the director of family engagement. Lawrence said she “always had a very large interest in creating events and programs for families and children” and envisions more collaboration between the early childhood center and the congregation in general — some programs for holidays, and others that “are just fun Jewish cultural things.”

“The fact I get to do music as part of my job is thrilling to me,” Lawrence said. She is “extremely excited to continue the existing musical culture” at Gates of Prayer.

That history was highlighted in the congregation’s announcement. Rabbi Lexi Erdheim said that though styles change, “one thing that remains constant, especially in a place like New Orleans, is music.”

Rabbi David Gerber said “we know the power of a melody and its ability to bring the words of prayer to life. We know that the sounds of our sanctuary are nothing short of divine.”

He said with Lawrence’s “love for our traditions, her commitment to creating and strengthening Jewish community and her extraordinary musical talents, we are confident that our amazing musical tradition is in good hands.”

Lawrence succeeds Tory May, who is retiring the summer after serving as cantorial soloist since 1987. A concert is tentatively planned for the weekend of June 12, depending on what coronavirus restrictions are in place at that time.

“I am eager to enrich the already wonderful musical culture at Gates of Prayer,” Lawrence said.