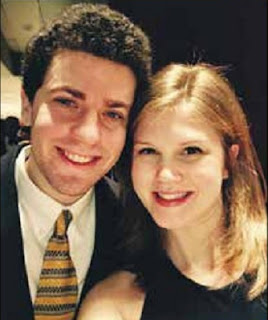 When Robert Wittner, who is one of seven cantors being ordained this month at Hebrew Union College in New York, placed on his resume that he is receiving the Cantor Brian Miller Memorial Prize for academic excellence, he did not anticipate that upon graduation, he would be assuming the pulpit where Miller served from 1996 to 1999.

That entry certainly attracted the attention of the search committee at Birmingham’s Temple Emanu-El, which informed him of the connection during the interview process.

The congregation announced on April 14 that Wittner would become the congregation’s new cantor this summer, succeeding Jessica Roskin, who resigned last fall.

Wittner has lived his entire life in New York City, aside from college and the HUC-mandated year studying in Israel. His only concern about moving to this much smaller Jewish community? The heat — though he quickly adds that New York City can get quite hot in the summer.

He said he felt the sense of community in Birmingham, and “hadn’t experienced a community that was so bonded” in New York. “It was so tight knit and loving, and engaged with all that is going on.”

He will start at Emanu-El on July 1, but because of social distancing, it will be a very different process in getting to know the congregation. Because of how coronavirus has shut down so many things, especially in New York, he said he and his wife, Alex, may wind up coming to Birmingham earlier than planned.

Many cantors have their roots as songleaders at Jewish summer camps, also honing their skills through high school youth groups. Wittner, though, had a different path, referring to the cantorate as “definitely the right choice for me” after “a ride full of many twists and turns.”

He grew up at the Hebrew Tabernacle Congregation of Washington Heights, but “I didn’t grow up at that synagogue being particularly engaged.” He went to sleepaway camp for just one summer, so when he started cantorial school, it was a “challenge at the beginning” because he had no liturgical background or the summer camp experience of current Jewish music. “I had to catch up.”

In college, he studied microbiology at Hamilton College, with minors in music and religious studies. Though he was likely to get accepted to medical school, by his junior year “there just wasn’t enough passion there” and he “needed to find a new path.”

He said he spent more time on music than in science in school, so he started considering possibilities in music. “I didn’t know what that would mean, besides opera.” He felt opera would not be a good fit, because he envisioned himself as a family person who would settle down, and “if you want to succeed in the opera world you have to put yourself out there.” He studied with opera great Jon Fredric West while in college.

The summer after graduating from college, he ran into the president of his childhood congregation. “He apparently had overheard that I sing,” and told him that the cantor would be out of town that next weekend, would Wittner be willing to lead Shabbat services?

“I hadn’t been to a Shabbat service in a number of years” and had no idea what to do. For the next week, the congregational president taught him the liturgical details, choreography and music.

As a musican, Wittner was “not surprised it went well musically,” but he was surprised “at how spiritually engaged and how communally engaged I felt in that experience.” That planted a seed, but he spent a year and a half doing a desk job at a medical office.

Realizing he needed to do something different, on the advice of the congregational president he visited Hebrew Union College, not knowing what Reform clergy would be like and whether he would fit in. Noting the diverse backgrounds and levels of observance, “it felt like a wonderful fit right away.”

Lacking Hebrew knowledge and knowing that would be part of the admissions process, he quit his job and did an Ulpan and got private tutoring. Then it was off to Israel, “which was wonderful” — and because he had not done Birthright, the required year in Israel for HUC was his first time there. It was eye opening, both in what Israelis face — he was in the Old City when a terror attack happened and they locked down the area — and the complexity of the situation with the Palestinians.

But for him, the biggest challenge was that he was in a serious relationship but not yet engaged, and the relationship had to be long-distance for the year. “We regarded the year as a test of sorts,” a test that they clearly passed.

The entire time at HUC, his internship was at his childhood congregation, something which is very unusual. He saw it as “an opportunity to truly do the kind of community building and engagement one would do in a real cantorial situation,” building programs and getting to know people. “That is what the position is about.”

Because of his lack of prior experience, he had “to catch up” on understanding Jewish liturgy, Hebrew, “things you would pick up in the NFTY experience or camp,” and he was “able to use my classmates as my teachers as well.”

Wittner said much of the instruction at HUC is still in the classical style, though as a movement, the music is tending toward folk and rock influences. He leans classical, “but I recognize that isn’t where the movement is as a whole.” He noted that Emanu-El has “a vaunted history of classical music,” and anticipates that for the High Holy Days he will be doing most of what has been done at Emanu-El musically for the last 50 years — whether services are in person or virtual “I’m a big fan of basically all of the composers they use.”

If services have to be virtual, “that could require some changes,” especially if there is no choir, a possibility he feels would be “really unfortunate.”

This month, HUC will have what they are calling a “consecration” for his class, with the idea of doing a formal official ordination at a later date. Whatever the ceremony is, “I’m just happy to be getting ordained.”

When looking at openings, a lot of the congregational profiles were “very robotic, all said the same thing.” Emanu-El, on the other hand, was very well organized. “They were so invested in getting a new cantor,” and he got a “sense of kindness… I’ve been to the South, the Southern hospitality was overflowing from this document.”

He said Emanu-El wants innovation, but with an understanding that innovation requires experimentation, and not everything will succeed. The atmosphere was also “more relaxed than many northeast congregations, which was quite attractive.”

During his first year, “the most important thing is getting to know the congregation, then you can build the most appropriate vision.”

He already knows there is a lot of desire for a kid’s choir, which will be implemented in the next year or two. He added that Tot Shabbat has always been a favorite of his, and “the kids were wonderful” when he did one during his interview in Birmingham.

The welcome to Birmingham has been “overwhelmingly kind,” with many offers to assist. “I’m sure I won’t have any trouble if I need advice.”