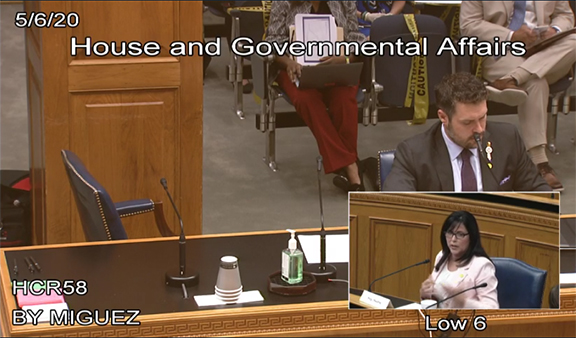 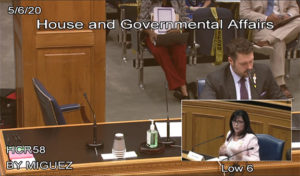 Louisiana State Rep. Dodie Horton is pushing back against media reports that claim she compared the state’s stay-at-home restrictions due to COVID-19 to living under Nazi Germany, saying a phrase was lifted out of context from a much longer conversation.

The exchange happened during a House and Governmental Affairs Committee meeting on May 6 that was discussing House Concurrent Resolution 58, which would strip the governor of powers to enforce criminal penalties for violations of the stay-at-home orders in areas where local communities are ready to open businesses and restart their economies.

In asking Rep. Blake Miguez, who introduced HCR58, about the extent of the measure, Horton said she had complied with the restrictions the governor had instituted in mid-March, and had not even gone to the grocery store, but said it was time to let areas of the state open up, as “our small businesses can control their environments” and “we as Americans have to take personal responsibility.”

After being told that the new guidelines for phase 1 of reopening call for churches and businesses to operate at 25 percent of previous capacity, Horton asked if the fire marshal would still be able to “go in and close a business down” if someone calls a hotline and reports them. “Our tax dollars, are they paying for that? I mean, are we in Nazi Germany?”

Aaron Ahlquist, regional director of ADL’s South Central Region, said “to make a comparison of the Governor’s order to protect the health and welfare of the residents of Louisiana to a brutal regime that intentionally tried to exterminate the Jewish people and other vulnerable communities, is not only inaccurate, but cheapens the horror of Nazi Germany, and the losses experienced by its victims. We call upon Representative Horton to apologize for her comments, and to reflect upon her word choices in the future.”

Horton said the media took a sound bite out of context “and made their own narrative… my comparison with Nazi Germany had absolutely nothing to do with self-isolation regulations or the Holocaust. My comparison had everything to with the events leading up to those horrific events.”

Horton, who attends a Baptist church in Houghton, said “as a person of Jewish descent, I would never speak of the Holocaust in a frivolous way. My own family members were victims of the atrocities committed under Hitler’s regime and I would never disrespect their legacies or those of any of the other millions of victims.”

She said the Nazis “used the unsuspecting public, “secret police” and government resources to force their will,” and she was alarmed at the link on the governor’s OpenSafely.LA.Gov website to report businesses and churches that were in violation of the order.

The day after the exchange at the legislature, she claimed victory in a posting on Facebook, saying that the link had been removed from the governor’s site, and she referred to the link as the “snitch portion” of the site.

While she said public safety is paramount, “many questions have been raised about the legality and constitutionality of some of the measures that were put into place to ‘protect’ citizens” and people should be wary of creating a public “secret police” to enforce rules that “did not go through our democratic process.”

That was the comparison she was making, she said. “In teaching about the Holocaust, we must also educate future generations about the tyrannical processes that led to those events” and call out any actions “that could compromise the liberty of our citizens.”

Horton told Southern Jewish Life that she apologizes “to those who I have unintentionally offended. My intent was never to compare the current global health pandemic to the Holocaust.”

Nazi imagery has been seen at numerous protests across the country, as groups demand that states loosen their shutdowns, and make overt comparisons to the Nazi era. In Illinois, a protestor had a sign criticizing the governor, saying “Heil Pritzker.” J.B. Pritzker is Jewish.

Another sign had the Auschwitz gate, with the expression “Arbeit Macht Frei,” “work makes you free,” perhaps the oddest contextual usage of that phrase.

In Michigan, a “Heil Witmer” (sic) poster with a backwards swastika was spotted, protesting the stay-at-home orders of Governor Gretchen Whitmer.

In Idaho, State Rep. Heather Scott made an overt Nazi comparison, saying that the government was telling businesses if they were essential or non-essential, “and the non-essential workers got put on a train.” She also said people were referring to Governor Brad Little as “Little Hitler.”

There has also been pushback against the popular online comparison of the stay-at-home orders to what Anne Frank had to go through, saying it minimizes the Holocaust.

In Colorado, Republican House Minority Leader Patrick Neville referred to Governor Jared Polis’ stay-at-home order as having a “Gestapo-like mentality.” Polis is Jewish and lost family in the Holocaust, and Neville later apologized for his wording.

In condemning that “Nazi-Germany name calling,” the Gazette in Colorado Springs also pointed out that it isn’t just one side of the aisle that misuses Nazi analogies — many opponents of the Trump administration decry his policies as echoing those of Nazi Germany, or at least being similar to the early stages of how the Nazis took power.