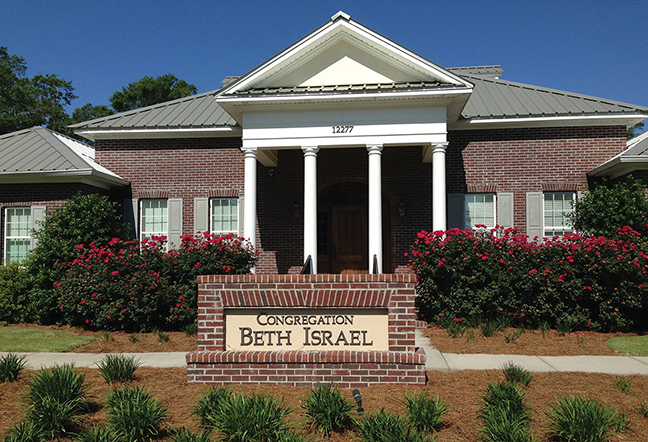 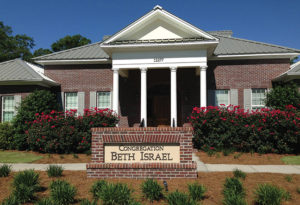 On May 31, Beth Israel in Gulfport voted to bring on its first resident rabbi — but in a step that is highly unusual for a Conservative congregation, the new rabbi is from Chabad.

In a 19-11 vote, the congregation brought on Rabbi Akiva and Hannah Hall from Chabad of Southern Mississippi. Another unusual dynamic is that Rabbi Hall is a native of Ocean Springs and grew up at Beth Israel, before he became involved with Chabad.

The Halls returned to the area in 2014 to set up Missisippi’s first — and still, only — Chabad presence, in Biloxi.

Beth Israel President Ryan Goldin said the Halls, who will officially start in September, “will be bringing their great knowledge of Judaism, as well as wonderful programs that Beth Israel has been lacking for a very long time.”

The Halls will be moving from Biloxi to a house across from Beth Israel that is owned by the congregation.

In the last couple of years, the congregation and Chabad have done an increasing number of joint programs, including the most recent Purim in NYC celebration and deli dinner on March 11, the last event before everything shut down due to coronavirus.

After the vote, the congregation notified the United Synagogue of Conservative Judaism that it was dropping its affiliation. It had been the only Conservative congregation in a state where all other congregations are Reform, except historically-Orthodox Ahavath Rayim in Greenwood.

Hall said Chabad has had their dedicated group of 15 to 20, plus involvement from some members of Beth Israel, and “we’ve always encouraged” people who are involved in both.

Beth Israel holds Sunday School, and Chabad has held a Hebrew School on Wednesdays, with some overlap in students.

Among those attending both have been Goldin’s children. He explained, “being in a small Jewish community, I’m going to do all I can to make sure my kids get the best Jewish education they can,” including youth group and Jacobs Camp involvement.

Even before he became president, Goldin said he would have “casual conversations” with Hall about how the Gulf Coast Jewish community could “move to the next step” to encourage greater Jewish activity in the area.

“In order for us to move to the next step, we’ve always needed a full-time rabbi,” Goldin said. “We couldn’t afford to have one.”

Goldin said Beth Israel’s membership had “dwindled to the point of barely holding on,” and he wants to make sure the synagogue will be around for his children to raise their kids in.

After a January joint adult Havdalah, Hall said he and a few board members from Beth Israel were talking about their struggles, including the expense of bringing in a rabbi, and how there isn’t much programming because there isn’t someone there to do it, and there hasn’t been growth no matter what they do. “It’s a very small community, we’ve had our struggles here too,” he said.

At one point, Hall said, “one of the members mentioned off the cuff, would there ever be a possibility of merging?”

Hall said he could see something like that “happening one day,” and soon he was invited to additional discussions and “it snowballed to where we are now.”

Hall said Chabad’s mission is to be “whatever role they need to fill in a community,” and there is no default model. Along the coast, “the way we can serve our community would be through Beth Israel” and not having a separate Chabad group. He said this will be a “unique format” where “we would be working as Chabad shluchim, but doing it through strengthening Beth Israel.”

When word got out that this was under consideration, everything was already shut down because of shelter-at-home restrictions. Some congregants expressed frustration that there had not been any opportunities to have a trial run or discussions before the May 31 congregational meeting that was held over Zoom.

In a message on the Chabad website explaining their vision for Beth Israel before the meeting, they noted that “misunderstandings and rumors” had been circulating about what was happening. “The few changes that will result from this partnership will take place with utmost sensitivity, flexibility and dialogue. The intention will be only to grow and improve, not to change,” they wrote.

Hall urged anyone with concerns to ask him directly and not assume based on what others say.

In the month leading up to the meeting, Beth Israel announced 14 new members, mostly those who have been involved with Chabad. Goldin said the new members are “excited” about having Hall lead Beth Israel and “want to see Beth Israel prosper to new heights” and joined as a measure of confidence.

The biggest hurdle will be the initial changes in ritual, as there are some major differences between Conservative and Chabad practices. “We’d have to meet in the middle somehow,” Hall said.

Goldin said Beth Israel is not becoming a Chabad synagogue, but will “continue to be a place that’s welcoming to all regardless of denomination.”

Goldin said the style of services “will remain basically the same” but the congregation will identify as Traditional rather than Conservative. Because Hall is from the area and grew up at Beth Israel, “he already knows what the differences are” and it isn’t like someone from the Northeast is coming in with a different set of expectations and a lack of familiarity.

Hall said the prayer book currently used by Beth Israel is “99 percent the same as an Orthodox Ashkenazi” service. Also, “I’m absolutely fine with English in the service.” The only difference he envisions in the Friday night service is the presence of a mechitza, the seating separation between men and women.

At Beth Israel, Goldin said there would be a “low mechitza in the middle of the sanctuary” when Hall leads services, “although there will be mixed seating available in the social hall” behind the sanctuary.

Hall said the mechitza isn’t the style they would have at a Chabad congregation, but that is part of the compromise. He knows some will object to it entirely, and “I’m not judging them, I understand it 100 percent.”

Others pointed out that women would not be able to read from the Torah or have aliyahs. Hall noted that for a long time, the congregation has held services only on Friday nights, so the only time the Torah was read was the High Holy Days.

But his emphasis, he said, has not been services. Education and programming are his focus. “Beth Israel has been having services for 50 years, but there hasn’t been adult education, Torah discussions, because there hasn’t been someone there to do it.”

While Hall hopes they will add services, and there are talks about expanding Shabbat morning services, “Jewish life shouldn’t center (just) on the services… there’s a lot to do.”

Mrs. Hall acknowledged that the “biggest hurdle” will be women’s roles in services, but “we’re going to be very focused on making it an inclusive experience for everyone in any way we can.”

One thing she plans to do immediately is start a monthly women’s program, something Beth Israel does not have, with educational and social opportunities.

She will also be the religious school director for the now-combined school, looking to attract new students and develop curriculum.

When the religious school starts back up under one banner, “we anticipate the largest enrollment in quite some time — this is by far the greatest reward,” Goldin said.

Mrs. Hall said they are already working on “creating this new entity together,” and the recent shutdown may prove to be advantageous for the transition. “They have been closed this whole time” since mid-March, and “we have been doing not much.”

With no in-person activities, “we can be working on how we can create a new Beth Israel, and then we can re-emerge” right before the High Holy Days.

Though the Jewish presence on the coast dates back to the 1850s, as evidenced by the historic cemetery in Biloxi, a formal Jewish presence was not established until after Keesler Air Force Base opened following World War II, bringing several Jewish families to the area.

A B’nai B’rith was established in 1953, taking over the cemetery that the city had been classified by the city as abandoned in 1916. Community members held Shabbat services at Keesler, then formed Beth Israel in 1958. Moody Grishman found the site for the original Beth Israel, a converted home in Biloxi that needed repairs following a fire. The building would be called the Jewish Community Center of Congregation Beth Israel. As the only congregation along the Mississippi coast, it became Conservative to accommodate a range of observance levels.

The building was enlarged in the 1960s, and in the 1990s the start of gambling along Mississippi’s Gulf Coast attracted additional Jewish families.

When Hurricane Katrina hit in 2005, the congregation had 65 families. Storm surge heavily damaged the building, which was just two blocks from the coast. With the facility beyond repair, the congregation met at Beauvoir United Methodist Church until they could rebuild further inland, a dozen miles away in Gulfport. The new building was dedicated in 2009.

The Halls moved to Biloxi in 2014, two years after he was ordained, to start Chabad of Southern Mississippi. In February 2017, they acquired a building on Pass Road.