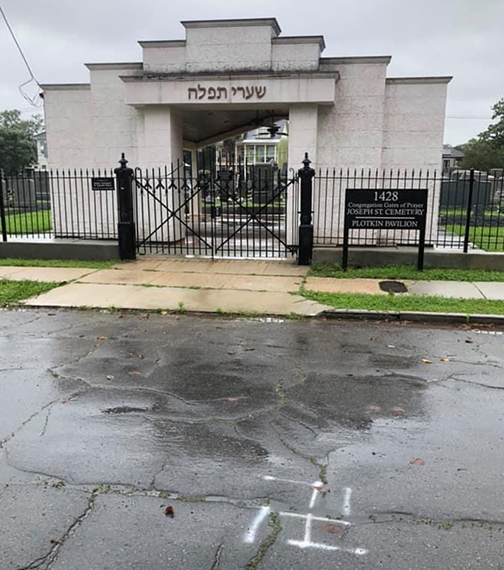 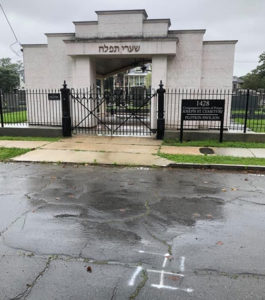 As Tropical Storm Cristobal brought tropical wind and rain to New Orleans, an ill wind of a different kind hit New Orleans with the discovery of swastikas and other graffiti painted on the street outside the Joseph Street Cemetery.

Established in 1850, the Joseph Street Cemetery is the third oldest Jewish cemetery in New Orleans and belongs to Gates of Prayer in Metairie. It is located about three blocks from the Uptown Jewish Community Center.

Three swastikas, which were discovered on June 5, covered paint markings from the Sewer and Water Board, and were part of a larger display of graffiti that included items that were reportedly not antisemitic.

According to the Anti-Defamation League and the New Orleans Police Department, the graffiti seemed to be the work of an individual seeking attention and does not represent a threat to the Jewish community. The swastikas were painted “backwards,” making it unlikely there was a neo-Nazi motive.

Still, “the use of symbols of hate outside of a Jewish cemetery are unacceptable and offensive,” Aaron Ahlquist, ADL regional director, said. “In this time of deep reflection on the legacy of hate, we condemn the use of antisemitic hate imagery to create fear and division.”

Gates of Prayer Rabbi David Gerber said the Nazi imagery is “painful” and “brings up a sense of fear” in the Jewish community, though they also don’t believe it was indicative of a threat or a movement in the area.
The NOPD and Jefferson Parish Police Department were increasing patrols around Jewish institutions as a precaution. The cemetery was inspected and there were no signs of damage.

The graffiti was painted over by residents in the area, and Gerber said he was amazed at how many people in New Orleans own pressure washers and volunteered to erase the vandalism. On June 8, the city came out to try and finish the cleanup against the stubborn paint.

“The most impactful message from this ordeal is the community of pressure washers who are at the ready — individuals and families who recognize that these symbols are incompatible with the values of their neighborhood,” Gerber said. “The symbols will be washed away. The knowledge that we live in a community of caring and kindhearted people will remain.”