What does congregational reopening look like? Two resume in person this weekend 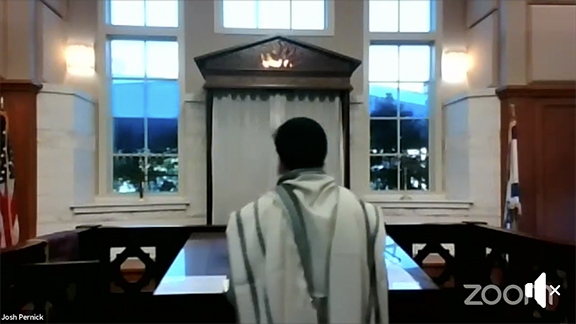 While the Jewish Community Centers in New Orleans and Birmingham have reopened with a range of new procedures and restrictions, most synagogues haven’t followed suit.

What will a synagogue reopening look like? A couple of congregations in the region have taken the plunge, and though the doors are opening, it won’t be business as usual.

Admittedly, the summer is a time when congregational life slows down considerably. Rabbis take vacations or spend time at Jewish summer camps, which are closed this year. In New Orleans, the three Reform congregations rotate hosting joint services month to month, something that continues this year, though virtually.

For Conservative and Reform congregations, there isn’t as much pressure to resume in-person services because of Zoom or livestreaming — options that are unacceptable in Orthodox and Chabad settings, and for that reason those are the congregations leading the way to reopening. Those are also typically among the smaller congregations in a community, making social distancing easier.

Two congregations in the region — Beth Israel, an Orthodox congregation in Metairie, and Beth Shalom, a Reform congregation in Baton Rouge, announced the resumption of in-person services, but with a slew of restrictions.

Beth Israel announced it will hold one service per week initially, with a maximum capacity of 24. Priority will be given to those who are saying Kaddish that week for one of the seven categories of relative for whom Kaddish is required. After determining who will attend for that reason, remaining spaces will be filled by a lottery system, with a 3 p.m. deadline on Thursdays for that weekend.

As an Orthodox congregation, there are no virtual services on Shabbat. On Fridays, mincha will begin at 6:45 p.m. and be streamed, along with part of Kabbalat Shabbat. After the online portion is done, candles will be lit at Beth Israel and in-person services will continue.

In the announcement, Rabbi Joshua Pernick and President Hal Ungar said “If circumstances permit, we will eventually shift to Shabbat morning services with an online offering on Friday nights.”

No service will go more than two hours, and for those who desire a weekday minyan for a yahrzeit, that can be arranged on the patio, playground or in the rabbi’s backyard, but not in the sanctuary.

For the services, attendance is restricted to ages 12 and up, and attendance for those age 65 and up is “discouraged” but not forbidden. Social distancing of 8 feet will be enforced, and masks are also required. A supply of surgical masks has been ordered in case someone shows up without one, but one is not permitted to stay if refusing to wear one inside the building. Gloves are optional.

There will be a temperature check, and anyone over 99.8 degrees will be barred. Someone testing positive for COVID or exposed to someone with COVID can not enter until after a 14-day self-quarantine and a negative test result. Anyone with symptoms at any point three days before the service will not be granted entry, and anyone visibly sick or believed to be sick in shul will be asked to leave.

Members will be asked to stay in their cars until it is time to enter the building with social distancing. An entrance line will form on the ramp for the temperature checks.

In the sanctuary, chairs have been rearranged to provide maximum seating at a distance of eight feet in all directions. The wall between the sanctuary and social hall is down, with chairs going back into that section. The bimah has also been moved up by three feet. The main sanctuary doors will be closed, congregants will enter by the social hall doors. There are a couple places with two seats, for family members sitting together. Otherwise, there are 14 seats on the men’s side, eight on the women’s.

Upon entering the building, one must go directly to the sanctuary and take the next available seat toward the front of the room.

Members who have their own books should bring them, otherwise they can check one out to use for the duration of the pandemic. Books may not be left for future use. Similarly, members are encouraged to bring their own tallis and take it home afterwards. For those without, there will be tallesim laid out individually that can be used, they will then be taken out of rotation and set aside for at least a week.

The kitchen, water fountains, board room, children’s room and office will be closed, miniature water bottles will be available and can be taken into the sanctuary. Tissue boxes and sanitizer will be available by the entrances to restrooms, with the tissues used to open the door, and paper towels for turning the sink on and off.

At the end of the service, members will exit in order, starting with the back row, and leave the building, no socializing in the lobby.

At Beth Shalom, there will be a guest speaker for the resumption of services. Rev. Gerard Robinson of McKowen Missionary Baptist Church will speak about Black Lives Matter at the 6:30 p.m. service on June 12. Reservations are also needed for Torah study on June 13 at 9:30 a.m. and the Shabbat morning service at 10:30.

Reservations are required to attend the service, and must be submitted via an online form by June 11. Anyone approved for attendance must wear a mask, arrive 15 minutes before the service starts and go directly to assigned seats in the sanctuary. Preference for attendance is given to members. Anyone with symptoms must stay home.

In making a reservation, the number of people in a family group is required.

Babysitting is available only for ages 6 and under, and children not with the babysitter are required to stay with the family at all times, and not wander around. The library, patio and playground will be accessible, but adult supervision is required.

Everyone is encouraged to use their own prayerbooks and items such as kipot and tallesim, but for those who do not have their own, prayerbooks will be rotated in and out of use, and ritual items that are worn can be checked out for the duration of the restrictions.

For those whose reservations can not be accepted, Zoom information will be provided.

Rabbi Natan Trief will say his farewells to the congregation with a virtual event on June 20 at 6 p.m., and there will be an Eaux-Neg Tailgate following the 6:30 p.m. service on June 26, having a socially distant Baton Rouge tailgate in the parking lot.

Some groups had services or programs the last weekend of May, for Shavuot.

Chabad of Alabama held brief in-person Shavuot services. On May 29, there was a socially-distant reading of the Ten Commandments in the parking lot, followed by popsicles, with everyone in attendance assigned a space that they were not to leave during the 15-minute gathering.

Anshe Sfard in New Orleans, a small Orthodox congregation toward downtown, opened for Shavuot services, with seating only in marked seats, a face mask requirement, hand washing and a recommendation that anyone who feels unsafe or the slightest bit unwell should remain home.

Chabad in New Orleans also hosted outdoor Ten Commandments readings, with social distancing. Reservations were required to ensure proper spacing. Chabad in Metairie had a regular indoor minyan for ages 12 to 50. For those over 50, an outdoor Torah reading was held, and a children’s reading was held later in the day, in the parking lot.

Birmingham’s Temple Beth-El, on the other hand, had a Davening with Our Neighbors Shabbat service on May 15 at the Avalon Condominium parking lot, about a mile from Beth-El. The Highland Park Neighborhood Association had been holding social distancing concerts there on Friday nights, and asked Rabbi Stephen Slater and Sarah Metzger to do Shabbat services there, just down the block from Slater’s house.

After positive feedback from that event, Beth-El had an Open Air Kabbalat Shabbat on the terrace of the Zivitz home on May 29, with distancing, masks and limited attendance.

Most congregations are keeping their doors closed for now.

Citing the continued increase in cases in Jefferson County, Birmingham’s Knesseth Israel, the state’s only Orthodox congregation, said it will maintain its hiatus on services, and continue to have weekday programs and learning sessions on Zoom. Temple Emanu-El said it is suspending in-person events through June 30.

Dothan’s Temple Emanu-El will continue with virtual services, and tentatively is planning its in-person annual meeting for July 1 and first regular Shabbat service for Aug. 7, both of which would still be available via Zoom.

Huntsville’s B’nai Sholom has developed a safety committee to discuss reopening, which will not take place before June 30.

Montgomery’s Agudath Israel-Etz Ahayem, one of the earliest congregations to institute strict social distancing measures, has “no current plans to resume services as normal.”

Tuscaloosa’s Temple Emanu-El will continue having virtual services and activities through the summer.

In Alexandria, Gemiluth Chassodim was looking at June 5 for reopening the building under Phase 2, so Rabbi Raina Siroty can broadcast the Zoom service from the sanctuary. Once the sanctuary is opened to the congregation, Zoom services will continue for those at risk or unable to attend.

B’nai Israel in Monroe will continue Zooming services for the near future.

Though services are still not in person, the three Reform congregations in New Orleans are doing their traditional Summer Union Services. Unlike other years, the times will remain consistent each month — 6 p.m. on Fridays and 10:30 a.m. Saturdays. Gates of Prayer is hosting June services as Tory May ends her tenure as cantorial soloist. Temple Sinai will host in July, and Touro will lead August services. There are hopes that an in-person option can be added later this summer.

Jackson’s Beth Israel will keep meeting virtually for at least the next month, and by June 28 plans an announcement on the prospects of in-person services the rest of the summer and for the High Holy Days.