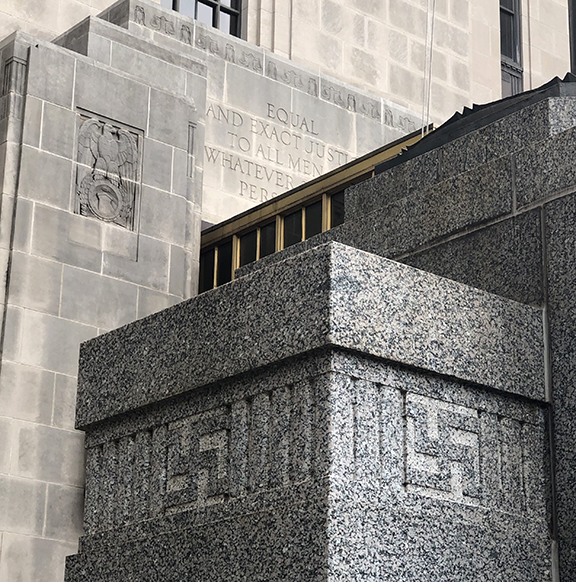 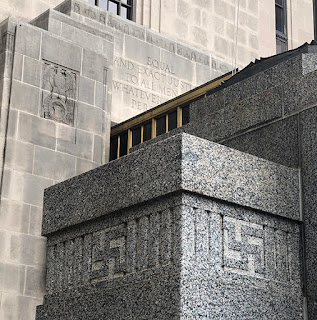 With the removal of the Confederate memorial that had stood in Birmingham’s Linn Park since 1905, some have turned their attention to an issue that has come up repeatedly over the years — the existence of swastikas as part of the decoration in the Jefferson County Courthouse, near the main entrance on the other side of the building from Linn Park.

The issue has come up every few years, generally not making a ripple. This time, Nadav Raviv started a petition on change.org, saying the swastikas on the façade had bothered him and “I would love for these to be removed,” and “why not strike while the iron is hot.”

He added, “Whether the original intent was meant to be inflammatory or not, it’s a symbol of hate and murder and needs to be removed.”

At press time, over 300 had signed the petition.

The swastikas are on either side of the pillers on each side of the staircase leading to the building’s main entrance. There are two on the sides facing the stairs, and three on the other side, with one of them visible only from the building’s service driveways. Of the 10 swastikas, five are oriented in the same direction as the Nazi symbol while the other five are pointed in the other direction. All of them are horizontal, none are rotated at the 45 degrees used for the Nazi symbol.

Joseph Casper Baker III, an administrator on the I Believe In Birmingham Facebook page, one of the places where the issue is being discussed, said it “makes an appearance about once a year on average.”

Generally, reaction is split between those who see the swastika as a hate symbol in any context, and others who point out its use in several religions and among the Navajo as a symbol of prosperity.

Part of the debate stems from how the swastika was a popular design element before the Nazis took it, especially in Art Deco construction. It is even incorporated into the floor at the memorial for President James Garfield in Cleveland, which was dedicated in 1890.

The courthouse was designed by Holabird and Root of Chicago, a firm that is also known for designing Soldier Field. The cornerstone was laid in 1929 and the courthouse was completed in 1932.

Al.com’s Jonathan Sobolewski did a video on the subject in 2017, pointing out that the swastika, prior to World War II, had been incorporated into Boy Scout badges and promotional trinkets for Coca-Cola.

Sobolewski also noted that the 2017 bill aimed at preventing the removal of Confederate monuments also made it illegal to alter historical buildings, including courthouses, so removing the swastikas would likely require a vote of the legislature or a court order.

In 2012, the head of tourism for Gainesville, Fla., was in Birmingham for a conference and, as he later described it, mocked the symbol by standing in front of it and doing a Nazi salute, posting the photo with a note saying it should be removed from the building. Naturally, the photo drew a slew of complaints that led to a disciplinary hearing.

The last major effort to remove the swastikas came in 2015, when the local NAACP was pushing for the removal of two “Old South” murals in the courthouse lobby that depicted slaves picking cotton. Commissioner David Carrington also said he wanted to see the swastikas removed, and the issue was discussed by the commission.

The removal has never been a priority in the local Jewish community. During the 2015 discussion, WIAT-TV interviewed Daniel Odrezin, who at the time was assistant executive director at the Birmingham Jewish Federation. He said the community appreciated the “sensitivity of the members of the commission” and would welcome the removal if people wanted it, but “it’s certainly not something that we at the BJF are going to call for.”

Odrezin will be chairing the newly-reconstituted Jewish Community Relations Committee.

In the petition, Raviv says “Whether the symbol is meant to signify Native American prosperity for most it is perceived as a symbol of hate. If it can be removed and make a difference in people’s lives why not remove them.”

Related: Ask Bubba Meyer — What’s with the swastikas in the floor at New Orleans’ Ernst Cafe?