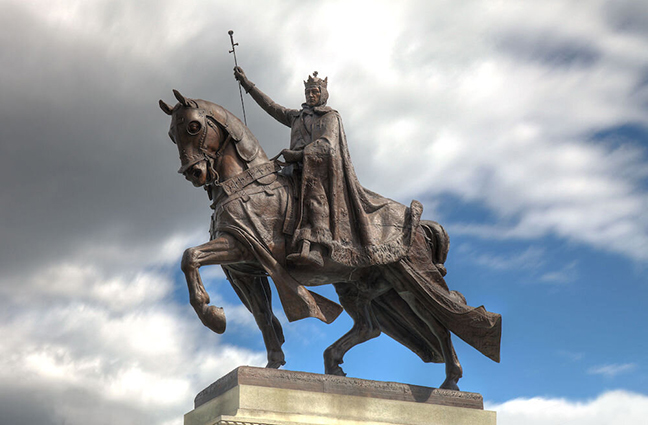 As Confederate monuments, statues of Christopher Columbus and other flawed historical figures tumble across the country, a Jewish-Muslim coalition in St. Louis has targeted that city’s namesake and accompanying statue.

The controversy could reverberate in New Orleans, where the St. Louis Cathedral is a beloved landmark in the heart of the French Quarter. First built in 1727, then rebuilt after a 1788 fire, it is the oldest Catholic cathedral in continuous use in the United States.

The Missouri activists cite how St. Louis, King Louis IX of France, led major persecutions of Jews and Muslims in the 13th century. A change.org petition was started by the Committee to Change the Name of St. Louis, with over 700 signatures as of June 28.

“St. Louis has a large and vibrant Jewish and Muslim community and it’s an outright disrespect for those who are part of these faith communities to have to live in a city named after a man committed to the murder of their co religionists,” reads the petition created by Ben Poremba, a native Israeli who owns four restaurants in the city; Umar Lee, a Muslim activist and writer who says he is a descendant of Confederate General Robert E. Lee; and Moji Sidiqi, executive director of the Regional Muslim Activist Network. “I ask all people of good faith committed to the modern values of equity and coexistence to sign this petition to rename the City of St. Louis to something more suitable and indicative of our values.”

Poremba and Lee said they became aware of the king’s actions against Jews in 2009 because of a Tisha B’Av service led by Rabbi Hershey Novack, co-director of the Chabad center at Washington University, at the statue of Louis IX, which is located at the top of Art Hill and features the French king atop a horse, bearing a sword.

The statue had been given to the city by the Louisiana Purchase Exposition Company after the 1904 World’s Fair.

Tisha B’Av, referred to as the saddest day on the Jewish calendar, commemorates the destruction of the First and Second Temples in Jerusalem. At the service, Novack recited a poem in Hebrew and English written by a rabbi who witnessed the burning of 24 cartloads of manuscripts of the Talmud, the primary text of Jewish religious law and theology.

That burning was ordered by Louis, a devoted Catholic who was declared a saint by Pope Boniface VIII in 1297.

Louis IX became king in 1226 and is celebrated in the Catholic world as a pious and humble defender of the faith and of the poor. By 1230, he banned Jews from moneylending, though that was an essential part of the economy. In 1234 he cancelled one-third of all debts owed to Jews and declared that in the future, they could take pledges only in front of “trustworthy” witnesses.

He also presided over the Disputation of Paris in 1240, where Rabbi Yechiel of Paris was ordered to defend the Talmud against charges of Nicholas Donin, a Jews who had converted to Christianity and told Pope Gregory IX that the Talmud contained numerous passages that were blasphemous or insulting of Christianity.

Louis IX’s biographer quoted Louis as saying it was better to plunge a sword through a Jew than to discuss matters of faith with him.

The preordained verdict led to the burning of about 12,000 volumes of the Talmud. As this was before the invention of the printing press, each had been copied by hand, and the burning was seen as a massive tragedy. For centuries, many European Jewish communities held a fast day on the anniversary.

In 1248, Louis IX led the Seventh Crusade, an attempt to capture Jerusalem from the Muslims, financing it in part with property seized from France’s Jews. He failed and had to be ransomed from the Egyptians, but stayed in the area and fortified some Christian towns in northern Israel before returning to France when his mother died. In 1269 he started the Eighth Crusade, during which he died.

Louis IX also ordered the expulsion of Jews who kept copies of the Talmud or other banned books. In 1258, he called for “profits of usury” to be taken from the Jews and restored to the victims, seizing the property of Jews to repay the debts. In 1268 he sought to expel the Jews, ordered their arrest and confiscation of their property. He reconsidered the following year, but ordered Jews to wear a distinctive badge.

“I’m not a practicing, shomer Shabbat Jew, but as the son and grandson of victims and survivors of the Holocaust, the idea of burning books, the idea of making Jews wear a distinctive badge, the idea of expelling people out of their homes and taking their property for holy wars, for the killing of other faiths, that just is troublesome to me,” said Poremba.

Lee pointed out that “Nazi Germany gained inspiration and ideas from Louis IX as they embarked on a campaign of murderous genocide against the Jewish people. Louis IX was also vehemently Islamophobic and led a murderous crusade against Muslims which ultimately cost him his life.”

Poremba and Lee met more than 16 years ago after Lee, who had lived in Israel, heard Poremba speaking Hebrew in the Delmar Loop. The two became friends and canvassed in 2004 on behalf of John Kerry, the Democratic candidate for president.

Lee, who was active in documenting the 2014 Ferguson protests, has been pushing for the removal of the Louis statue for years. The activists released the petition a day after Tower Grove Park’s Board of Commissioners ordered the removal of the Christopher Columbus statue because of the explorer’s mistreatment of Indigenous people.

“In this day, when we are reexamining history, taking a hard look at history… we can also take a look at those things that glamorize and glorify anti-Semites,” said Lee, who briefly ran in 2016 as a Republican candidate for St. Louis mayor.

While Poremba supports the removal of the statue, he said that after releasing the petition he has since “toned down a little bit of my rhetoric because I didn’t realize this was going to hit such a strong nerve with some folks here.”

Poremba received threats on Facebook and over email and calls for boycotts of his restaurants, he said. He also heard from people who said they supported the cause in theory but that the effort was a distraction from “the urgent and immediate issues of police reform and overhauling our criminal justice system [because of] its structural racism.”

“My interest in this is really more educational, and it’s part of my general belief that civic engagement and discourse is important for any society, and so I really don’t believe that efforts to change the name of the city will ever occur. The statue may or may not come down — I don’t know; it’s a beautiful piece of art, for what it’s worth — but I think that people should be aware of the history and not just accept it for what it is,” Poremba said.

St. Louis Mayor Lyda Krewson does not support the effort to remove the statue and change the name of the city, according to her spokesperson, Jacob Long.

“She thinks the changing of names and the taking down of statues is sort of a distraction, and a one-day issue, from the real hard work and the difficult conversations we should all be having, not only in St. Louis, but also, frankly, around the country and the world surrounding the racial disparities and inequities that exist in our society,” Long said. “Certainly, the people who are pushing for the removal of names and statues and streets, their causes are legitimate; we’re not refuting that.”

Linda Koenig, who leads tours of the city and serves as a docent at the Holocaust Museum and Learning Center, said that while it wouldn’t bother her to change the name of the city or remove the statue, she doesn’t think the petition makes sense.

“Judging historical characters by today’s moral standards, their behavior centuries ago by today’s standards, we can’t do that,” said Koenig, a member of Congregation Temple Israel. “There are skeletons in everyone’s closets.”

Rabbi Susan Talve, the founding rabbi of the city’s Central Reform Congregation, told JTA that taking it down would help advance racial justice in the United States.

“We’ve been talking about that statue for a long time,” she said, adding that removing the statue would be “a very important part of reclaiming history, reclaiming the stories that have created the institutionalized racism that we are trying to unravel today. If we’re not honest about our history we will never be able to dismantle the systems of oppression that we are living under.”

The petition sparked opposition nationally from pundits who saw it as anti-Catholic or the latest example of “cancel culture.”

“Absolute red line — and a red alert to St. Louis Catholics,” wrote Sohrab Ahmari, an Iranian-American who serves as opinions editor for the New York Post and is a Catholic convert.

A new group, St. Louis Forever, was founded on June 21. In an email, the group stated “This statue does not only stand for a man, but stands for our devotion to God. As a saintly king, St. Louis does not merely represent the French heritage of this place, but even more he represents the Kingship of Christ on Earth that we pray for with every Our Father. This statue is and ought to remain as a testament to our faith. As St. Louis leads us on, we ought to follow in bringing Christ to our city through our faith, our prayer and our actions.”

On June 27, there were a few skirmishes between groups during a three-hour protest at the statue. Many Catholics knelt and prayed at the foot of the statue.

Lee acknowledged that the protest was on a Saturday, limiting Jewish participation, but said it was also to “preempt the White Nationalists.”

On June 28, the Archdiocese of St. Louis issued a statement, citing Louis IX’s charitable works, and calling him “an imperfect man who strived to live a life modeled after the life of Jesus Christ.”

The statement says the statue symbolizes a hope for peace, and “this energy of change should be focused on programs and policies that will dismantle racism and create a more equal society for all races and religions.”

Southern Jewish Life has reached out to several representatives in the Jewish, governmental and historical communities in New Orleans, along with Take ‘Em Down NOLA, but nobody has wanted to comment as of press time.