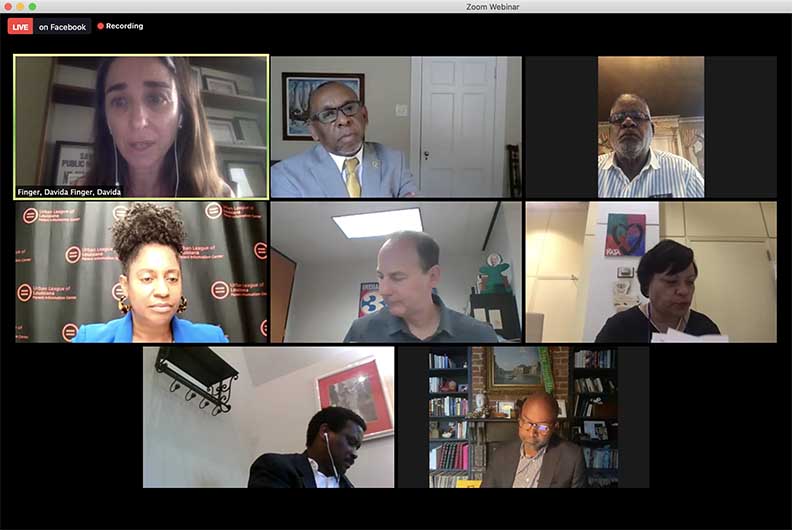 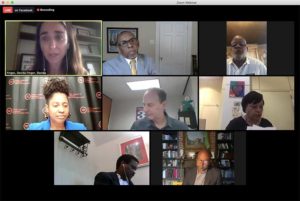 While many New Orleans Black leaders were appreciative of the opportunity to speak with the New Orleans Jewish community about concrete steps that can be taken to combat systemic racism, it came with a desire to see things move past the talking stage, and an assertion that the Black community can’t solve this problem alone.

The Jewish Federation of Greater New Orleans convened “Shema: A Virtual Listening Session with Local Black Leadership” on June 29, co-hosted by the National Council of Jewish Women’s Greater New Orleans Section and the Anti-Defamation League’s South Central Region. About 400 members of the community tuned into Zoom and Facebook Live for the 90-minute discussion that went far beyond its allotted time.

Finger said the evening would show “a critical space for us to be in as allies,” and “the transformative power” of listening in moving forward.

The new Goldring Center will formally launch on Oct. 1. Federation CEO Arnie Fielkow said its creation, which has been in the works for over a year, “is certainly timely” and will enhance relations between the local African-American and Jewish communities.

New Orleans Mayor Latoya Cantrell said these topics aren’t new, and “it just doesn’t rest with Black people to come up with the action steps to address racism in this country,” as “it really takes building partnerships” to change things.

Cantrell said this is an opportunity in history to address race more honestly and openly than before, and challenged the community “to dig deeper, educating yourselves on racial issues and injustices that have plagued the Black community for a very long time.”

She said there is a “great need for education in responsible, effective activism, where energy needs to be focused and determine who can make the changes and make things right, and work with them to get things done.”

Cantrell said she wants to hear from the Jewish community, see constructive dialogue and “how we get there together.

“We have to use one another, and it doesn’t start in the Black community.”

Bishop Tom Watson of Watson Ministries said he doesn’t want to see action yet. “First, I need you to see the pain, the possibilities of Black life, its virtues, its vices, its strengths, its weaknesses, its yesses and its noes.”

He urged workshops and curricula to help undo the learned behaviors of racism, even in households that believe themselves to not be racist.

Whites need to acknowledge the problems are real, and Black people can help others understand.

He said the Jewish community can help in the development of a Black agenda, “where we create policies that promote and not punish vulnerable Black people,” in employment, education, housing equity and other issues. He urged an effort to “confront poverty with an agenda to reduce it and build the Black middle class.

Judy Reese Morse, CEO of the Urban League of Louisiana, said the Jewish community’s open letter of solidarity to the African-American community was “very much appreciated.”

To be an ally and an anti-racial organization, she asked if one is prepared to bring institutions in line with equitable practices, and embrace the true meaning of economic justice for all.

The Urban League is working on police reform and other avenues of advocacy. “We want you to work with us, we want you to better understand the issues,” she said. This is a tremendous opportunity. For as much pain as there is… you have issued the opportunity to listen and learn. This is a very important first step. The Urban League wants to take you up on that offer.”

Reynold Verret, president of Xavier University of Louisiana, said “we don’t tell the truth to our children,” and it is important to not teach only that American is a country that did just good things.

“Jews and Blacks, we are the descendants of slaves,” he said. “There is an understanding of society from the eyes of a slave.”

White students also need to be liberated through what Dr. King referred to as the opening of their eyes to injustice, Verret said. He quoted Rabbi Abraham Joshua Heschel, who said “we may not be guilty, but we all are responsible.”

Physician Cory Hebert, WDSU medical editor, was among those who noted that the Covid pandemic has helped exposed medical disparities among groups. “We’ve been shining the light on it for a long time, but it has been a dim candle.”

A lot of truths are ignored or obscured. While it is said that Covid affects the Black community more because of poorer health in general, nobody talks about where that comes from. Chalking things up to poor diet and smoking is a way of blaming the oppressed. “You can’t blame without the frame,” he said. “No Black person wants to live in the projects. You can’t blame him for not eating good food when there is no good food around him” due to food deserts.

White women who are addicted to opioids get treatment and hospital sections are built to treat their newborns, he said. Twenty years ago, Black women on crack were put in jail and their children sent to foster care. “Black people are tired and frustrated because we all know the truth.”

Why do so many American Blacks have hypertension, he asked. When a slave was bought in Ghana, there was a salt test. If a slave couldn’t taste salt, that meant they had elevated salt levels and could stay hydrated on the long ocean voyage. Otherwise, they would dehydrate, so the current prevalence is genetic.

Hebert said there is a fear among many whites about what would happen to them if Blacks obtained power. “Black people as a group have never inflicted pain on white people,” he said. “We’re not in a rage all the time. We’re working hard to work with you, and we want you to work with us.”

Former State Senator JP Morrell said when whites ask whether they have done enough yet, the answer is clearly no. “African-Americans have been denied a seat at the table in a state where we make up one-third the population,” and racism “has just become more polite.”

He said Blacks have never really “penetrated beyond being a face… we see you, you don’t see us.”

The criminal justice system needs to be fixed “in a definitive and final way,” Morrell said.

In 2018, after a long battle, Louisiana got rid of the law that allowed jury decisions to not be unanimous, a quirk shared only with Oregon. Morrell pointed out that the law was instituted “to put Black people in their place” as a last vestige of Jim Crow. But those fighting to repeal that law couldn’t talk about race because “White people’s eyes glaze over… they disengage. It’s a black thing, I don’t want to have to deal with it.”

They instead formed an “apple pie, America, Antonin Scalia and fairness” argument and “had to wait politely for white people to give us permission to talk about race.”

Morrell noted there was an antisemitic motive behind the Oregon law, which was struck down by the U.S. Supreme Court in April. After a Jewish hotelier failed to be convicted of murder in 1933, on an 11-1 vote, Oregon law was changed to allow for non-unanimous verdicts. It also blunted the power of jurors from racial, ethnic and religious minorities.

New Orleans City Council President Jason Williams argued that the criminal justice system hasn’t gone awry, it is working exactly as designed, to benefit some but not others.

There also has to be a way to prevent a police officer who gets caught for misconduct in Plaquemines Parish from just going to Wisconsin and getting a law enforcement job there.

Williams said it is time “to move beyond changing hearts and souls” and put “teeth behind changing the power structures that exist.”

Alanah Odoms, executive director of ACLU of Louisiana, said their Justice Lab will be policing the police, to put racist policing on trial and “hold officers who would inflict harm accountable.” The ACLU is also pushing to end mass incarceration and “helping people back to being productive citizens.”

Morrell said the Jewish community, like every other group in American society now, has to “take a moment to look unflinchingly in the mirror, and see how a lot of the systems that exist in the state are not just the fault of Anglo-Saxon white Protestants, but even Jewish people as well,” noting an ancestor who was on a Jewish-owned plantation near Donaldsonville.

Norris Henderson, founder of Voice of the Experienced, said the Jewish community has “the gravitas to hold people accountable.”

By putting together the forum, the Jewish community “identified who in this community is putting in work,” Henderson said.

“If we circle the wagons as a group,” he said, “we can accomplish anything we want to… we can bend this curve around criminal justice.”

Several speakers spoke of what Watson termed “racial justice battlefield fatigue,” where America reacts to events, holds discussions, and it doesn’t go much further. Watson noted he met with the Jewish community after Katrina for a similar listening session.

“We have to have actual solutions,” he said.

Henderson also said “we’ve had these listening sessions before. How do we move now? Protest should lead to policy.”

He said he appreciates the-building of personal relationships, not transactional ones, because “more than anything, if we listen to folks who are closest to the problem, most of the time we are closer to the solution.”

Quentin Messer, president of the New Orleans Business Alliance, noted that while there has been “accelerated progress” for many groups, such as the progress on LGBTQ rights in the past 50 years, “we’re dealing with the problem of the 20th century” and having to justify that feeling.

Yes, Obama was elected twice, and there is Oprah, but economic challenges persist. Messer said Blacks have higher levels of workplace attrition at every level, Black professionals are missing out on post-Covid employment gains, Black homeowners pay more than their share of property taxes; Black businesses lack capital and connections, and despite education levels there is still a racial wealth gap. As an example, net worth of Blacks with graduate degrees compare to whites with some college.

“In a state that is over one-third Black, it makes all of us poor,” he said. “We are acting against our own collective interest if we don’t face the facts.”

The speakers said it is past time to move toward systemic, lasting change.