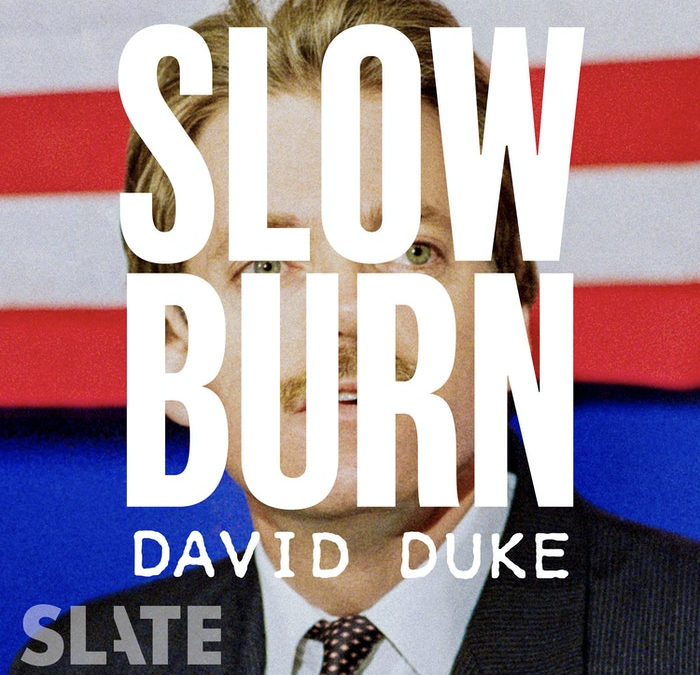 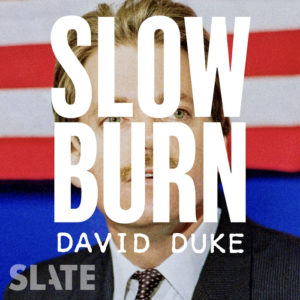 A native of the New Orleans Jewish community, Josh Levin is bringing a formative experience of his childhood to the national stage through Slate magazine’s “Slow Burn” podcast series — several episodes on the rise and fall of David Duke.

Now the national editor of Slate, Levin was a kid growing up in New Orleans in the 1980s and 1990s, when David Duke was on the rise, “and it made a big impression on me.”

The experience of having a Nazi sympathizer in the halls of power in Louisiana “really did stick with me and kind of shook me out of complacency about politics” and how people’s lives could be affected.

Duke was elected to the Louisiana Legislature in 1989, when Levin was eight years old. His victory reinforced a sense in Louisiana’s Jewish community of being different, which intensified when Duke ran unsuccessfully for U.S. Senate in 1990 and for governor in 1991. “It felt like he could win,” Levin said, which alarmed the Jewish community.

In 1988, Duke had run for president under the Populist Party banner. The party was the brainchild of conspiracy theorist Willis Carto, founder of the antisemitic Liberty Lobby and the Holocaust-denial Institute for Historical Review.

“Ever since I’ve been a journalist, I’ve wanted to look into that period of time and understand it in a way I didn’t understand it as a kid,” he said. Doing it as a podcast series gives him the time to do a proper, comprehensive take.

The episodes focus mainly on “that specific period of between 1989 and 1991,” reflecting on where Duke came from, his affiliation with the Klan and Nazis. Initially, Duke tried to absorb some of the notoriety of the Ku Klux Klan while “arguing he was creating something new,” Levin said.

Duke would “alternate between trying to appeal to a white populace by using these old Klan symbols and slurs, but would at other times be on television in a suit and try to make his white supremacism appear more moderate than it actually was.”

Duke ultimately left the Klan, deciding “the Klan’s baggage was a little too heavy, given his goal to be a political leader.”

He tailored his message to his audience, speaking to white supremacist groups as a brother, but speaking to broader audiences in terms of pride in white heritage, security, taxation and maintaining a separate identity.
Duke’s message found fertile ground in Jefferson Parish in the era of Sheriff Harry Lee, who was criticized for racial profiling and portraying the area as a safe haven from New Orleans.

“There are lessons to be learned from looking at Duke’s rise and how he got to be so popular, how the media treated him, how political parties talked about him, what his voters said about him,” Levin said,

While many people want to connect the story of Duke to today, Levin said “I really want listeners to live in those moments and not be particularly explicit to any connection to what is happening now.” He added, “people are going to make connections they want to without me saying anything.”

By being in the historical moment, it is possible to “inhabit” them “as periods of time that could have gone a different way.”

Indeed, in early episodes, he notes how there were several opportunities to stop Duke before he became a phenomenon. For instance, none of his opponents for the State Legislature took him seriously enough to challenge his residency in the district.

There were “different points along the way where decisions were made that gave him a boost.” In some cases, political leaders tried to ignore him, thinking if they spoke against him, it would give him “more oxygen.”

Even all these years later, Levin said, “it’s hard to know what the right approach is.”

One approach that changed the narrative came as a spur of the moment incident. Anne Levy, a Holocaust survivor living in New Orleans, went to Baton Rouge in June 1989 for a ceremony at the State Capitol, where the Simon Wiesenthal Center’s Holocaust exhibit, “The Courage to Remember,” was being displayed — partly as a response to the presence of Holocaust-denying Duke.

Shocked to see Duke there, Levy went up to him and demanded to know where he got the chutzpah to show his face there. Flustered, Duke left as quickly as he could, but the confrontation was caught by the assembled media, and others were emboldened to go after Duke. Levy, who had been reluctant to talk of her experiences before then, became a fixture in the anti-Duke movement.

Levy’s actions “inspired the broader anti-Duke movement to move into a more direct confrontational mode,” including pointing out that he was still selling Nazi books from his state office, Levin said. “The media took notice that he had kind of run away from her.”

As of late June, four episodes had been aired, and there is a bonus episode featuring Levy for subscribers. In the most recent one, Levin describes the dilemma of whether or not to try and interview Duke for the series.

Levin went to Brown University where he did some writing on the side while studying computer science, but decided “ultimately that was not for me,” and he pursued writing.

He started as an intern at Washington City Paper after graduating in 2002, which he said was a “really good experience, to get to learn how to report and write at a place with a lot of good mentors.”

The next year, he went to Slate, where he is now the national editor and co-host of the sports podcast “Hang Up and Listen.” This year, he became the host of the fourth season of “Slow Burn.”

In 2005, he did a series of reports from New Orleans after the levees broke. “I felt privileged to go down there and document it,” he said. Much of the reporting was about his family’s experiences.

In 2019, he released the book ‘The Queen: The Forgotten Life Behind an American Myth,” the story of Linda Taylor, “America’s original ‘welfare queen’.” Levin said Taylor’s story “says a huge amount of how our country works and our politics work.”

Cited by candidate Ronald Reagan as the prototype welfare cheat, Taylor is a much more complex individual. “It is rare to have a narrative like that where you can tell such a huge, sweeping story with the focus being on a single person,” he said.

Levin said he likes to “tell these personal stories that make larger points about the way the world works.”

Though he wants his pieces to be viewed and understood in their own times, he acknowledged “the reason it feels so important and appropriate right now is because of this national reckoning we’ve been having about racism… I’m glad it feels like part of the conversation we need to be having right now.”