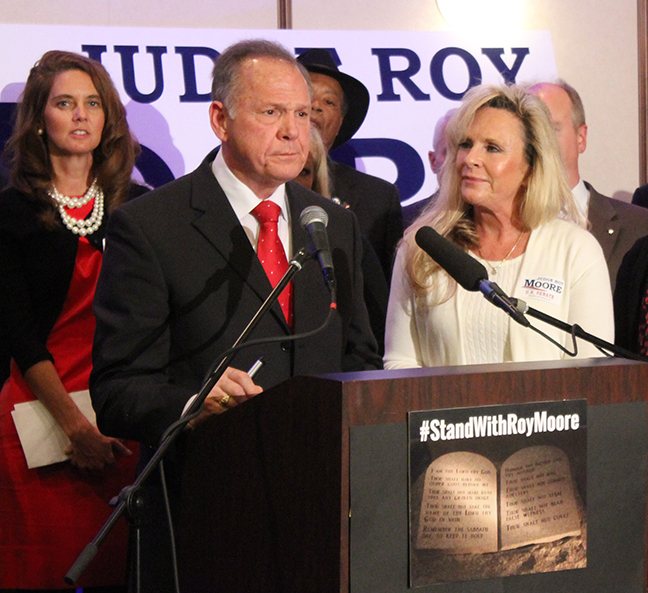 On July 6, Judge Andrew Carter rejected Cohen’s motion to dismiss the suit, which stems from an episode of Cohen’s short-lived 2018 series, “Who Is America,” which included an interview with Moore.

“Who Is America” debuted on Showtime in July 2018, and an interview with Moore was aired during the third episode, on July 29.

The suit, which was filed a month later, is for defamation, intentional infliction of emotional distress and fraud, and seeks “actual, compensatory and punitive damages in excess of $95 million.”

To lure Moore, Cohen and his agents “falsely and fraudulently represented… that Yerushalayim TV — which does not actually exist — was the producer and broadcaster of the show that Judge Moore would appear on” and that Moore would “receive an award for his strong support of Israel in commemoration of its 70th anniversary as a nation state.”

Had Moore known it was a ruse, the filing states, he and his wife would not have traveled to Washington for the Feb. 14 ceremony.

During the segment that aired, Cohen was disguised as Erran Morad, “a supposed Israeli anti-terrorism expert and former Mossad agent.” During the segment, Morad started by talking about Alabama’s historic support for Israel, then pivoted to innovations in Israeli technology, including a fraudulent device that supposedly detects child molesters through a hormone in their sweat.

During Moore’s 2017 run for U.S. Senate, four women accused Moore of inappropriate conduct when they were underage and he was around 30 years old. Moore passionately denied the allegations, but in the segment, Morad’s device “malfunctioned” by going off whenever it was placed near Moore, much to the feigned surprise of Morad. Moore then cut off the interview and walked off the set.

After the segment taped, Moore’s counsel sent a letter saying they would seek legal remedies if the segment aired.

The suit states that “this false and fraudulent portrayal and mocking of Judge Moore as a sex offender, on national and international television… has severely harmed Judge Moore’s reputation and caused him, Mrs. Moore and his entire family severe emotional distress, as well as caused and will cause Plaintiffs financial damage.”

Moore signed a release before the interview, but claims it was obtained through fraudulent means, and was done in the name of Yerushalayim TV, which does not exist.

Cohen’s attorneys claim that Cohen is covered under the First Amendment and court rulings on satire, “especially where the satirical work ‘could not reasonably have been interpreted as stating actual facts about the public figure involved’.”

Others duped into interviews included Sarah Palin and Dick Cheney. Rep. Matt Gaetz of the Pensacola area was interviewed, also lured with the pro-Israel angle, but Gaetz said he was a fan of Cohen and looked forward to seeing how he was portrayed.

According to Larry Klayman, Moore’s attorney, the suit will now proceed to discovery, including taking depositions from Cohen and others.

“We are gratified that the Court is allowing the Moores’ case to go forward and we look forward to putting Cohen and the other defendants under oath,” Klayman said. “The alleged defamation of Chief Justice Moore was malicious and despicable and it is time that a jury of the parties’ peers allow justice to be done.”

A year ago, the suit was moved from Washington to New York.