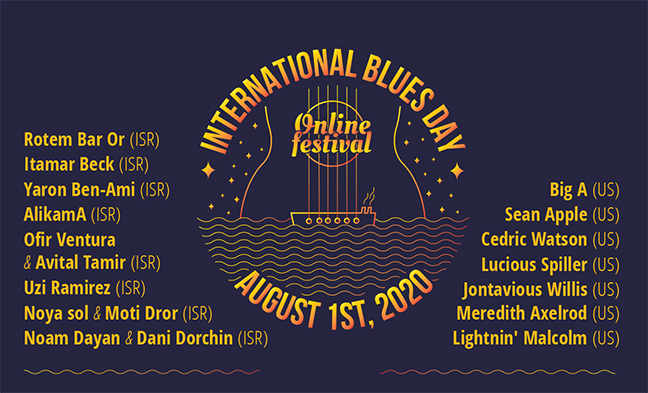 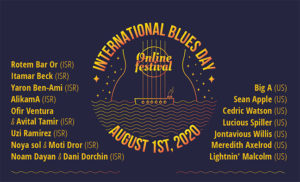 Nobody’s Fault Productions, an Israeli music producer with an emphasis on blues, will celebrate International Blues Day with a 12-hour virtual festival, featuring blues musicians from Israel and the United States, with a heavy emphasis on Mississippi.

The festival will run from noon to midnight in Israel, or 4 a.m. to 4 p.m. Central. The festival is a “pass the hat” event with concerts in Hebrew and English, with proceeds going to the musicians.

The suggested cover charge for the entire festival is 120 shekels, or $35. Single concerts are recommended at 20 shekels, roughly $5, which can be paid directly to the artist’s bit in Israel or PayPal in the U.S.

Nobody’s Fault Productions was started by Yamit Hagar, who was working in the computer industry. She heard Mississippi Fred McDowell on the radio, listened the entire weekend, and knew that she wanted to be involved with the blues.

In 2012, she brought Robert Belfour to perform in Israel, having never arranged anything like that before. The show sold out and a second show was added, and the production company was born.

She has produced several blues festivals, with an eye on bringing older performers to Israel while they can still travel. She also attends the Mississippi Juke Joint Festival every year, and visits the homes of many blues legends in the Delta.

The festival begins at 4 a.m. Central with “The Blues as a State of Being” featuring Rotem Bar Or of the Angelcy in Tel Aviv.

Itamar Beck will perform from Acre at 5 a.m. Yaron Ben-Ami will perform at 5:45 a.m., with the first half in Hebrew and the second half in English. Ben-Ami spent his younger years playing the blues throughout the Southern U.S., including Mississippi bus stops and the steps of churches in New Orleans.

AlikamA starts a series of English performances at 6:30 a.m. At 7:15 a.m., Avital Tamir and Ofir Ventura perform. Ventura has been playing the blues and harmonica since age 16, and from 2011 to 2013 was part of the Ori Naftaly Band, which won the 2013 International Blues Challenge for best blues band in Israel. She also played with Electric Blue, and is now a member of the band OSOG, along with Tamir.

Tamir is best known as lead singer for Israeli metal band Betzefer. In 2013, he released “The Devil Went Down to the Holy Land.”

At 8 a.m., Uzi Ramirez will perform. A session guitarist and film score composer, he released “Lick My Heart,” an Americana album that was produced in Nashville, with blues, folk, funk and rock influences.

Noya Sol and Moti Dror will perform at 8:45 a.m. Dror calls Sol “the queen of the blues scene in Israel.” Born in Russia, Dror experimented with several styles, before a call from Sol prompted him to return to the blues for his 2019 EP, “Something Different from Netanya, IL,” and the first single, “The Treasureman’s Blues.”

Sol is known for animating the blues of early 20th century freeborn women. Her most recent show is in the New Orleans Dixieland style of the 1920s and 1930s. Her single, “Johnny’s Love,” won the Israel Blues Challenge, so in 2018 she represented Israel in the International Blues Challenge in Memphis.

The Israeli part of the program concludes with a 9:30 a.m. set by Noam Dayan and Dani Dorchin. After an extended stay in Chicago, Dayan returned to Israel and started the Noam Dayan Blues Band. Dorchin is a multi-instrumentalist who performs garage blues as a one-man band. With two albums out, Dorchin has played Israel’s biggest festivals and toured Europe since 2015.

Sean Apple will begin the U.S. portion of the event, starting a performance at 10:15 a.m.

A Pennsylvania native, Apple moved to Mississippi many years ago to live his devotion to the blues. After performing in many of the region’s authentic clubs, including a five days a week stint at a club on Beale Street in Memphis, in June he opened the Bad Apple Blues Club in Clarksdale, just down the street from the Crossroads.

Jontavious Willis, a Greenville, Ga., native, performs at 11 a.m. A country blues singer and multi-instrumentalist, the 24-year-old Grammy-nominated Willis has released two albums, the second of which, “Spectacular Class,” debuted at No. 12 on the Billboard blues chart. Taj Mahal and Keb’ Mo’ played major roles in producing the album.

At 11:45 a.m., Lucious Spiller of Clarksdale will perform. A St. Louis native, Spiller was born into a musical family. His grandfather and uncle formed the Salt and Pepper Shakers, one of the earliest string bands, and have a Mississippi Blues Trail marker in Macon for founding Black Prairie Blues. Spiller is an International Blues Challenge award winner and has been featured in the documentary film, “Moonshine, and Mojo Hands.”

Meredith Axelrod, the 12:30 p.m. performer, is an instrumentalist and vocalist in New York who echoes the pre-microphone days with a repertoire that focuses on 1890 to 1930, from Ragtime, pop, Boogie Woogie, Tin Pan Alley, to blues and jug band. She pursues an authentic sound, as if one traveled back in time, even learning how to sing by listening to wax cylinders and 78-rpm records.

At 1:15 p.m., the festival heads to Louisiana for a set with Cedric Watson, who was featured in the HBO series “Treme.” Growing up in Texas, he was attracted to the French songs of Louisiana, and has played with many of the biggest names in Creole music. He and his band, Bijou Creole, also mix in Zydeco influences. Watson has been nominated for Grammy Awards four times.

Lightnin’ Malcolm of Holly Springs performs at 2 p.m. He opened the 2015 Tel Aviv Blues Festival, calling himself one of the last itinerant blues musicians, performing on numerous instruments by himself. He has performed with T-Model Ford, Jessie Mae Hemphill and R.L. Burnside. In 2009 he won Blues Music Awards Best Debut Artist, and his most recent album, in the one-man-band format, is “Foot Soldier.”

The festival concludes with a set by Anthony Big A Sherrod. A Clarksdale native and son of gospel singer E.J. Johnson, Sherrod first picked up the guitar at age 6. A student of bluesman Johnnie Billington at the Delta Blues Museum, Sherrod played for Buddy Guy and was featured in the documentary “We Juke Up In Here.” He currently plays regularly at Red’s Blues Club in Clarksdale.

In 2018, Sherrod performed at the “Blues and Beer” Festival in Sderot, a community in Southern Israel that has taken a pounding from Gaza rocket attacks in recent years. He said “I am here in Israel for the very first time and I am looking forward to rocking out tonight. I don’t care about bomb shelters and sirens, I am here to play music.”

The entire schedule is available here, and the PayPal links will be published on that page before the event.