Jones vs. Tuberville: Which Alabama Senate candidate is better for Israel? 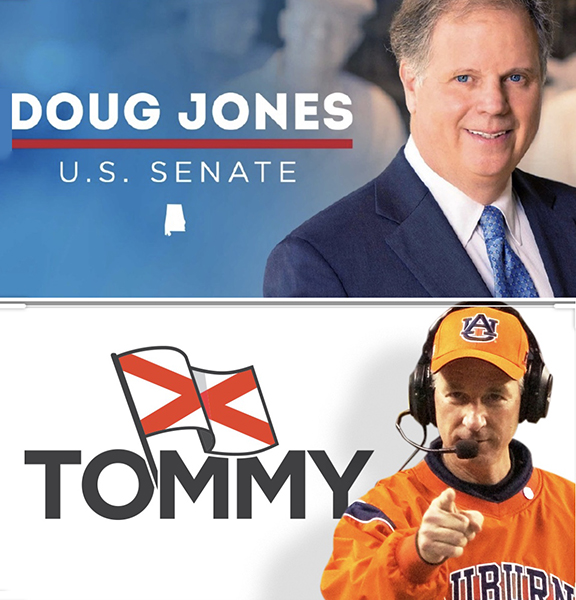 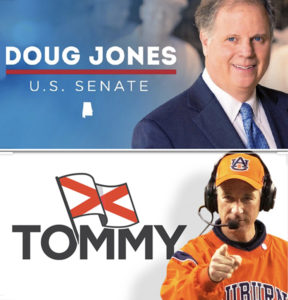 In the United States Senate race in Alabama between Doug Jones and Tommy Tuberville, which candidate would be better for Israel and the U.S.-Israel relationship? It comes as no surprise that the spokesmen for two national pro-Israel political organizations, the Republican Jewish Coalition and Democratic Majority for Israel, had dramatic differences in their answers — though in both cases, relations between the candidates and President Donald Trump dominated the conversation.

Tuberville, a Republican, is a former Auburn University football coach who is running to unseat Democratic incumbent Jones in the Nov. 3 election. Jones was elected in late 2017, narrowly defeating controversial GOP candidate Roy Moore, in a special election to fill the remainder of the term of Republican Jeff Sessions, who Trump had appointed as U.S. attorney general. Jones became the first Democrat elected to the U.S. Senate from Alabama since 1992.

Mark Mellman, president and CEO of the Democratic Majority for Israel, maintained that it is crucial to have Democrats in the Senate, such as Jones, who are strong supporters of Israel.

He cautioned against electing candidates such as Tuberville who say in advance they are going to support Trump, because, Mellman contends, Trump is erratic and some of his policies in the broader Middle East have frayed America’s standing.

“Doug Jones has been a very strong supporter of the U.S.-Israel relationship and Democrats need more of these strong supporters in the U.S. Senate, not fewer,” said Mellman. “So it is very important from a pro-Israel point of view to keep Sen. Jones in the Senate and the Democratic caucus.”

Jones, Strauss said, not only voted to impeach Trump but he also is a member of a political party that Strauss contends has increasingly turned its back on Israel. Therefore, Strauss maintained, Jones can’t be relied on to support Israel as strongly as Tuberville would.

“On one side, you have Tuberville, who is an ardent supporter of the president and his ‘Peace to Prosperity’ plan and a great supporter of a strong U.S.-Israel alliance, and then you have Jones, who obviously does not support the president, which puts him out of alignment with the people of Alabama,” Strauss said. Alabama is considered to be a heavily Republican state.

Strauss maintains that one of the reasons Trump is so popular in Alabama is his support for Israel. That’s a reference to Alabama’s large and influential Christian evangelical community, which tends to be pro-Israel.

Jones also worries that support for Israel is becoming politicized. “I’m concerned the relationship with Israel is beginning to see some cracks for political reasons,” Jones said last year at a program to promote business ties between Alabama and Israel. “What I’m seeing is that the relationship with Israel is now being used as a political weapon to try to divide people for political gain. It’s happening here, and it’s happening in Israel. Our alliance is too important to allow that to happen.”

Tuberville’s campaign has put out a strong position paper on Israel and the former football coach has consulted with the Republican Jewish Coalition’s legislative director.

Last year, Tuberville told ALReporter.com, “Since being the first country to recognize the Israeli State in 1948, America has served as one of Israel’s most trusted allies. This strong relationship has bolstered our nation’s national security, economic innovation, and technological advancement. The U.S. and Israel have a unique bond.”

Of course, it is not a given that Trump will be re-elected, even though it was the candidates’ relationship to the president that dominated the conversation with the representatives from the Republican Jewish Coalition and Democratic Majority for Israel.

Republican Strauss maintained that Trump’s Democratic opponent, former VP Joe Biden, will be less steadfast on Iran than Trump, and suggested that Jones likely would support Biden’s positions on Iran, which could weaken Israel. Biden was vice president when the Obama administration negotiated the controversial Iran nuclear deal. The U.S. withdrew from the agreement under Trump, who saw it as flawed and inadequate. Biden has indicated he would like to re-enter the agreement.

In a statement to this publication, Jones said “though the Iran Nuclear Agreement was not perfect, it was carefully crafted with international allies and adversaries alike to limit Iran’s uranium enrichment capacity, while monitoring progress using the International Atomic Energy Agency, therefore ultimately limiting the breakout time that Iran would need to develop a nuclear weapon. While there were no guarantees what would happen at the expiration of the treaty, there would have been time for the U.S. and its allies to adapt to changing world circumstances to ensure that Iran never attained nuclear capabilities.”

Jones added, “I remain concerned about pulling out of this agreement, especially given that the U.S. had fulfilled our end of the bargain and from all indications Iran was in compliance. Reneging on a treaty of such global importance isolated the United States, alienated other parties to the agreement, heightened the possibility of a nuclear-armed Iran, and most significantly, increased tensions between the U.S. and Iran and in the region creating instability that threatens Israel’s security.”

Meanwhile, as August heads into September and more and more people begin focusing on Alabama’s Senate race, this question will be front and center: Can the former Auburn coach, who defeated Sessions handily in the Republican primary, unseat Jones, who barely won in 2017 against a candidate that many, even Republicans, thought was flawed?

It remains to be seen.

What is certain is that the Jones-Tuberville race will intensify as the nation, including Trump, Biden and national political funding sources, keep a watchful eye on Alabama to see if Democrat Doug Jones can hold on to his seat for a full term, or if it will become Republican once again.

In either case, both candidates have affirmed their support for Israel and reflect an appreciation for the strong ties that exist between the U.S. and this crucial Middle East ally.