Libeling of Police Exchanges with Israel motivated by fear, confusion 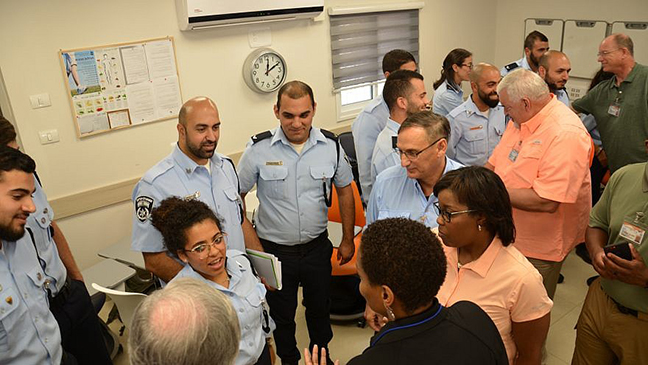 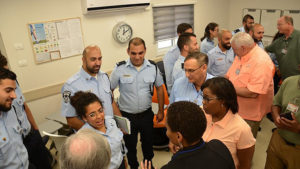 Participants in a GILEE tour talk with Arab recruits to the Israeli police.

An enlightening discussion focusing on learning exchanges between Israeli law enforcement personnel and U.S. police departments, and the way that Israel’s adversaries exploit these exchanges to malign the Jewish state, was hosted recently by the Atlanta Israel Coalition.

The three panelists on the Atlanta-based Zoom call, “Israel and the U.S. Police Exchange,” included a North Carolina police chief, a Georgia State University professor and an African-American advocate for Israel. They debunked the canard that U.S.-Israel police exchanges, designed to enhance the law enforcement and counter-terrorism capabilities of both countries, contribute to the oppression of Americans of color.

Panelist Gina V. Hawkins, chief of the Fayetteville, N.C., Police Department, responded to a cartoon, displayed on the Zoom call, of an Israeli soldier kneeling on a Palestinian’s neck, coupled with a white American police officer kneeling on the neck of an African-American. The cartoon has been very popular among those hostile to Israel.

“I have never seen anything like that in the program,” said Hawkins, who is African-American and Panamanian. Hawkins visited Israel through the Georgia International Law Enforcement Exchange, a program spearheaded by long-time GSU professor and fellow panelist Robert R. Friedmann.

There was “absolutely nothing” in the educational exchange with Israel that was related to suppression of minorities, added Hawkins. The chief further explained that the Israel exchange experience wasn’t tactically-oriented. Instead, it helped her and other law enforcement leaders become better executives and managers.

She was part of a group that was in Israel for two weeks in 2015. “What I learned there on an executive level I still use today,” she said, mentioning technology, training and the judicial system as three of the areas they delved into on the trip.

Even though Israel, being a small country, has one police force while the U.S. has many, Hawkins said her group “learned that law enforcement is so similar even if it is a different country.” Like the U.S., Israel, she said, is made up of “different communities — and learning the communities and their histories is crucial to police work.”

As a Christian, she was deeply moved by being in Israel. As a police executive, she was deeply impressed with how virtually everyone plays a role in ensuring the country’s security. “Israel is a very small country surrounded by other countries that are not very friendly, so for that country to exist… requires a lot of thoughtful, no knee-jerk reaction decision-making.”

Reflecting on the propaganda tying police brutality in the U.S. to exchanges between U.S. and Israeli police, Hawkins said “people are scared” since the George Floyd incident. “It’s a wave,” she explained, noting that there were similar reactions of fear and frustration in the wake of other recent national traumas where African-Americans were seen as being treated unfairly by the criminal justice system.

She calls the unrest that such events trigger “awakenings” — and with those comes “believing the first thing someone is going to feed you.”

Panelist Joshua Washington, the African-American Director of the Institute for Black Solidarity with Israel, picked up on the police chief’s themes.

He said that anti-Israel activists who attack GILEE’s relationship with Israel throw out accusations they can’t substantiate. Referring to a recent meeting where emotions flared, he also said there is confusion and fear and that some exploit “emotions that are tense and high and apply them to their own agendas and narratives… this is like hijacking the emotions of the black community.”

“It really is possible to oppose police brutality without demonizing another people, and perpetuating anti-Jewish conspiracy theories and that Jews control the world and are ‘puppet-masters’,” he added. “I say as a black man that this never bodes well for the black community — besides the fact that it is a complete lie that any of this stuff (police brutality toward blacks and others in the U.S.) is attached to Israel.”

“It is a disservice to our community as well because there are a number of issues that plague our community,” he added. And when black activists and others in the U.S. attack Israel unfairly and irresponsibly, often without knowledge, “it not only demonizes Israel, it is not good for us” in the black community. Falsely pointing fingers at others accomplishes nothing, he said.

Friedmann, founding director of GILEE, which today involves an array of countries but began in the 1990s as the Georgia Israel Law Enforcement Exchange, also shared his frustration over attacks against the program’s connections to Israel from people within the Georgia State community, including faculty members. GILEE is a joint project of Georgia State University and local, state, federal and international law enforcement and public service agencies.

“We do not train officers how to shoot, we do not teach tactics, we teach leadership development — people have a misunderstanding,” he emphasized, with frustration. Attempts to malign the exchange program with Israel “come out of anger, but also are deliberate to fracture partnerships and alliances.” He said hundreds of testimonials on the GILEE website prove these critics wrong.

One of those website testimonials is from the National Organization of Black Law Enforcement Executives, which states: “NOBLE members throughout the country have benefited from programs developed and sponsored by GILEE since its founding in 1992. NOBLE applauds the work of GILEE in promoting the professional development of law enforcement executives.”

Cheryl Dorchinsky, founding executive director of the Atlanta Israel Coalition, moderated the panel. In a subsequent interview, Dorchinsky talked about the challenges at Georgia State as well as other universities.

“Anti-Israel activists at universities will pick a target, such as GILEE, or some other Israel educational initiative. They will demonize it. The root of this is just pure hate and antisemitism. It is like a virus; very little of these anti-Israel, anti-Semitic concerns include facts or even rational arguments — it is pure, unbridled hate,” said Dorchinsky.

She stressed that while there are some in the African-American community who are hostile to Israel, it is not a universal phenomenon, and that often these anti-Israel, antisemitic movements are ignited by pro-Palestinian student organizations and other groups, fueled and funded by outside forces.

The Atlanta Israel Coalition, which coordinated the Zoom conversation, is a non-partisan, volunteer-led organization that involves a diverse array of groups in programs and initiatives to deepen understanding of Israel and the U.S.-Israel relationship. It has grown over the years and no longer is just an Atlanta-based organization, and today has partners nationally and worldwide. Birmingham-based Israel InSight magazine was a co-sponsor of the program.

Along with GILEE, the Anti-Defamation League and Jewish Institute for National Security of America run law enforcement exchanges with Israel.

In a recent interview with JTA, George Selim, senior vice president of programs at the ADL, said, “Seeking to link Israel as a state to U.S. police misconduct is a bizarre excuse for the centuries-long history of racism and injustice that has been part of American history, really since our founding.” The JTA article provides an excellent overview of the entire U.S.-Israel police issue including insight into what is driving this defamation of Israel.

“Unfortunately, some are cynically trying to drag Israel into the debate, claiming the Jewish state is responsible for incidents of police brutality in the United States owing to law enforcement exchange programs between our two countries,” Steven L. Pomerantz, a former assistant director of the FBI and director of the Homeland Security Program at JINSA, wrote recently in “I Am the Architect of the U.S.-Israel Police Exchange. Don’t Believe the Lies.”

His article reflects the frustration that pro-Israel Americans feel over the maligning of these valuable exchange programs.