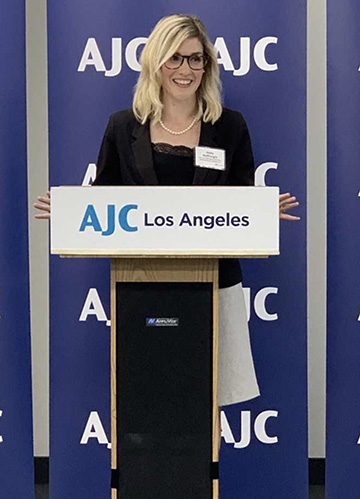 The bad news for the American Jewish Committee is that its business — anti-Semitism — is booming.

The good news is that AJC has made a bold decision in response — to send Holly Huffnagle, a 33-year-old Christian, with family roots that course through the Deep South, to the forefront of this battle.

If energy, determination, knowledge and a fresh point of view can help turn back this growing scourge, then AJC, one of America’s oldest Jewish advocacy groups, has picked the right person to lead the charge.

Huffnagle’s promotion earlier this year from assistant director of AJC’s Los Angeles office to its U.S. Director for Combating Antisemitism has caught the attention of many, mainly because Huffnagle is not Jewish.

“My goal is to bring a perspective from outside the Jewish community,” she explains. “I just happen to be Christian.” Antisemitism, she emphasizes, is not just a Jewish problem; when it erupts it endangers the broader society as well. Her Jewish colleagues at AJC have applauded her appointment.

Huffnagle has built an impressive resume as a leader in the fight against antisemitism. She’s taught American Christians about antisemitism and its link to anti-Zionism; worked at the U.S. Holocaust Memorial Museum in Washington and served in the U.S. State Department’s Office to Monitor and Combat Anti-Semitism. She also has spent extended time in Poland studying the Holocaust.

She does acknowledge that her Christian upbringing has been a factor in her wanting to combat antisemitism because, she believes, so much of the hatred and violence against Jews over the centuries has stemmed from Christian attitudes, actions and teachings, even if Christian anti-Judaism is no longer such a pervasive contemporary source. “Many of the antisemitic tropes and conspiracies used by the far-left or Islamist extremists today are borrowed from Christian anti-Judaism and medieval Christian Europe,” notes Huffnagle.

“I think where I got started working on Jewish issues and anti-Semitism was really through learning about the Holocaust while studying in Europe with Westmont College,” explains Huffnagle. “For me, as a Christian, I had a hard time understanding how the Holocaust — the murder of 6 million Jews — could have happened in Christian Europe. I did not know the history of Christian anti-Judaism — it was a big wake up call.”

Huffnagle, who grew up in California, is descended from ancestors who arrived in the port of Charleston in the late 1600s. Her family history on both sides runs through the South. Her forebears would make lives for themselves in Alabama, Louisiana and Mississippi, among other Southern states, as their journey in America unfolded.

She speaks with pride about her Mississippi grandfather, a personable Baptist preacher, standing up for the rights of Blacks and sticking his neck out when it wasn’t easy. Explains Huffnagle, “My grandfather saved a Black man from being lynched in the 1940s. He was young — in his 20s. And his father-in-law, my great-grandfather, risked his life to help Black Mississippians vote in the 1960s. He was older — in his 60s — but it was a cause he had been passionate about for most of his life.”

At the same time, there’s an acknowledgement that other ancestors were segregationists, fought for the Confederacy and owned enslaved human beings. “Yes, my family history is quite complicated, and not everyone acted righteously, and even those who did, didn’t do so all the time.”

One story she tells reflects her journey in coming to grips with her family’s past. One of her relatives on her mother’s side was the famous Confederate General J.E.B. (James Ewell Brown) Stuart, a member of a slave-owning family. “I had an interesting experience in October 2017,” explains Huffnagle. “There was a high school in Falls Church, Va., which bore the name of J.E.B. Stuart. That October, the school board voted to change the name to Justice High School.” The name change was in response to Stuart being a Confederate general and an association with slavery.

“I thought about it — my relative’s name is being removed from a high school,” remembers Huffnagle. “Should it make me sad? Angry? I think it might have, if I hadn’t been so exposed in my work to the necessity of understanding the perspectives — and the pain — of the other.”

Huffnagle also discovered her family had connections to the Mississippi Jewish community. Her grandmother played the violin at religious services at Temple Beth-El in Lexington. Her grandfather was given a leather-bound Jewish Publication Society edition of “The Torah” as a gift from Jewish friends. In a recent virtual interview, she showed the book as well as a printed program from the synagogue featuring her grandmother’s name.

While that keepsake program is a source of pride for Huffnagle, as a student of the Holocaust she noted its additional significance: “The program was from June 1941, the same month as ‘Operation Barbarossa,’ a turning point in Adolf Hitler’s expansion of power.”

In her new role at AJC, Huffnagle will coordinate and track her organization’s efforts to combat antisemitism nationally. Her job additionally allows her to develop and initiate new projects and campaigns. She will soon be moving from California to Washington, because her job also entails working with the federal government on antisemitism issues.

While Huffnagle’s assignment is dreadfully serious — helping to combat the worst antisemitism since the Holocaust — she remains upbeat, energetic, fresh and inspiring. These traits, coupled with her knowledge, passion for her work and uncompromising sense of purpose, create a formidable mix.

So much so that this young and determined national leader clearly is primed and ready to tackle the booming business of anti-Semitism, and not just on behalf of AJC but on behalf of concerned people everywhere.