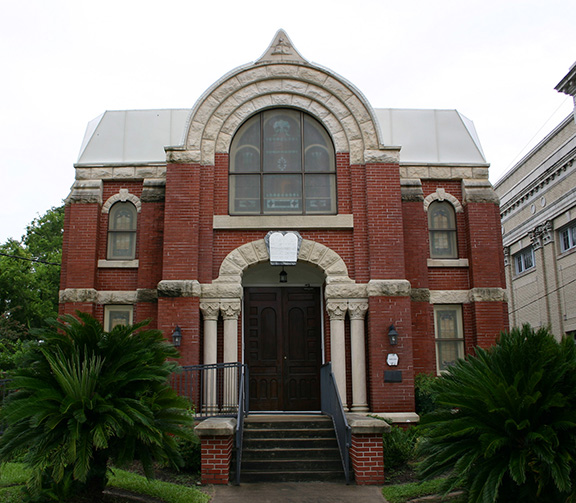 Damage assessments are still underway in Louisiana following Hurricane Laura, a Category 4 storm that came ashore near Cameron around 2 a.m. on Aug. 27, with winds of about 150 miles per hour.

In hard-hit Lake Charles, about 30 miles north of landfall, there was widespread damage downtown, where Temple Sinai’s historic 1904 building is located. The Capital One tower, which had a large number of windows blown out, is about four blocks from Temple Sinai.

While dealing with their own issues, they have done a preliminary look at the Temple Sinai building and reported that there is a tree in the kitchen. A more extensive damage assessment will be made.

Weinstein, who retired from B’nai Israel in Baton Rouge in 2008, has served Temple Sinai as visiting rabbi since 2010. This summer, the 55-member congregation announced that he would move to Lake Charles and become the resident rabbi.

Weinstein said his Baton Rouge condo was “99 percent packed up” in preparation for the move, but his new home was “seriously damaged” by Laura and needs a new roof. With the prospect of no electricity in Lake Charles for weeks, at age 78 and having undergone extensive medical procedures four years ago, he said the Sinai leadership has insisted he stay in Baton Rouge for now. While he understands the logic, he admitted “I’m torn spiritually.”

In Alexandria, Gemiluth Chassodim had several broken windows, roof damage and water damage, according to Rabbi Raina Siroty. She said some congregants had structural damage to their homes and businesses.

Rabbi Judy Caplan Ginsburgh said a tree went through her father’s roof and damaged support beams, and his pier was washed away. She said he commented that this was the worst storm he had seen in the area in his 88 years.

Alexandria is 125 miles inland and had hurricane-force winds.

There was no damage at B’nai Israel in Monroe.

In Shreveport, about 200 miles inland, there was surprise at the intensity of the storm. As B’nai Zion Rabbi Jana De Benedetti said, “hurricanes don’t stay hurricanes all the way up here,” and Laura still had Category 1 winds. The storm shifted east, so Shreveport was on the less intense west side of the storm, but there were still widespread power outages and tree limbs down.

The eye of the storm was about 200 miles west of New Orleans, which on Aug. 29 is marking the 15th anniversary of Hurricane Katrina and the levee breach.

The Jewish Federation of Greater New Orleans mobilized immediately, with the Federation’s Nourish, JNOLA and JNEXT programs organizing a supply run for evacuees from Lake Charles who were staying at New Orleans hotels. By mid-afternoon, supplies had been brought to the Sheraton, where there is a particular need for diapers, formula and wipes.

While the Federation’s hurricane response task force is still being formulated, the agency recommended donations to Second Harvest Food Bank and the Community Foundation of Southwest Louisiana. The Federation has also been in contact with the Jewish communities in Lake Charles and Alexandria.

Aug. 29 is the 15th anniversary of Hurricane Katrina and the levee breach that left New Orleans underwater for weeks.

This story will be updated. (Updated Aug. 29  at 3:12 p.m. with additional details from Rabbi Weinstein).