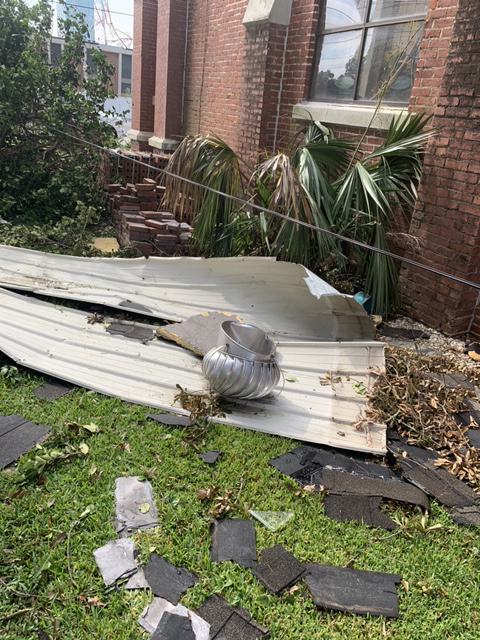 Outside Temple Sinai in Lake Charles

While damage is still being assessed throughout western and central Louisiana, it is already clear that two synagogues face major repairs, and the small communities will need help accomplishing the task.

Hurricane Laura came ashore near Cameron around 2 a.m. on Aug. 27, with winds of about 150 miles per hour, making it a Category 4 storm and the strongest to hit the state since the mid-19th century.

On Aug. 31, the Jewish Federation of Greater New Orleans convened a statewide Zoom call to formulate hurricane response. Ellen Sager and Bethany Sorkey, who head the Federations in Baton Rouge and North Louisiana, were on the call, along with Rabbi Raina Siroty of Gemiluth Chassodim in Alexandria, one of the two synagogues that was damaged. Michael Goldman represented Lake Charles as treasurer of Temple Sinai.

In Lake Charles, some members of the Jewish community reported “total devastation” of their homes, according to Goldman. “Most have damage but are handling the damage.”

The historical 1904 Temple Sinai building suffered roof damage, all windows in the social hall were blown out and there is water damage from the rain, all the files in the classrooms were soaked and the air conditioner was hit. There is also damage to the ceiling in the sanctuary.

The anticipated storm surge did not materialize, so the building did not flood; the water damage came from the rain.

The congregation’s Torahs had been moved to Abbeville, and on Aug. 31 were being transported to Touro Synagogue in New Orleans for safekeeping.

Goldman said that since Hurricane Katrina in 2005, insurance companies have instituted a “named storm deductible” of 5 percent of the insured amount, which means the 50-family congregation is facing a deductible of almost $80,000, which Goldman said “is a tremendous figure.”

The water system is “totally out” in Lake Charles, and a chlorine plant fire after the hurricane went through made breathing difficult. Most in the Jewish community have evacuated, Goldman said.

Siroty said that despite being so far inland, Alexandria had 100 mile per hour winds. Power outages were still widespread, and those who still had water were being advised to boil it.

“People had trees hit their roofs, a lot of people have structural damage,” she said. Many in the local Jewish community have century-old retail establishments that were damaged or otherwise affected.

Gemiluth Chassodim had all of its windows blown out in the front of the building and in the sanctuary, and roof damage in the sanctuary. A full assessment has not been made “because there is too much going on” and they only know about damage based on where rain collected in the sanctuary and social hall.

Those without power and water have gone to stay with friends or relatives in New Orleans or Baton Rouge. Siroty said there will be a lot of cleanup and recovery needed in the area, and a high priority is making sure families will be able to rebuild and stay in Alexandria.

The Alexandria congregation serves families from a wide area, including Fort Polk, Opelousas, Natchitoches and other towns, with about 120 families. There is also a small Conservative congregation.

In Shreveport, the two synagogues did not even lose power, and Sorkey said they were able to serve as a place for people to assemble during the storm. She said there were a lot of trees down but little significant damage.

In New Orleans, part of the mobilization is to help evacuees who are being housed in downtown hotels. On Aug. 28, Federation staff coordinated with the Sheraton and did a Sam’s Club run to provide needed items to evacuees. Cait Gladow, Federation marketing and communications director, said “it was alarming” to see evacuees with just a trash bag filled with what they could grab before having to leave their homes.

Arnie Fielkow, Federation CEO, said they are planning a “multi-layer” response, establishing a central address to combine efforts in the Jewish community, see where needs are that can be filled, mobilize volunteers and work with other existing agencies that are already providing services.

In the immediate aftermath, the Federation’s first recommendations were Second Harvest for volunteers and donations, and the Community Foundation of Southwest Louisiana

“There are a lot of areas we can help with” based on their post-Katrina experiences, Fielkow said, and in coordinating efforts.

Goldman said the most pressing immediate need in the area is cash. Without electricity and Internet, credit and debit cards are useless, and ATMs aren’t operating. “Cash is the only way of getting items they need,” he said, including food and water, or hotel rooms.

Based on Baton Rouge’s experience with the 2016 floods, Sager said gift cards will be an important element of relief as people try to repair their homes and replace what was lost.

Roselle Ungar, executive director of Jewish Family Service of Greater New Orleans, said they will have case managers and social workers to provide referrals and support. After the Baton Rouge floods, they helped many people with the lengthy paperwork needed for financial assistance requests.

Though the agency is in New Orleans, Ungar noted it is the only JFS in the state “and we’re here to help all the communities in the state.”

Down the road, JFS will offer its tele-mental health support. “The overwhelming majority of people going through this now are not thinking therapy sessions, they’re worried about putting a tarp down,” Ungar said.

Ned Goldberg, director of Jewish Children’s Regional Service, said the agency checked in with many in the affected areas. The agency works with families who have children with special needs, and Goldberg said those with ongoing needs should contact the agency.

Will Samuels has been collecting information on relief efforts and volunteer opportunities, and posting them as a slide show on the Shir Chadash, Pizza Nola and King Cake Hub pages.

Nechama: A Jewish Response to Disaster sent a team from its Minnesota headquarters to Lake Charles on Aug. 31 “to perform assessments of the area and determine how we can best serve those affected by Hurricane Laura.”

Nechama was on the ground in Louisiana after Katrina in 2005, and in 2016 was in Baton Rouge for an extended time following severe flooding. According to the agency, which recruits volunteers to help gut and repair flooded homes, “we have received calls from communities we have assisted in the past, wanting to help, and others requesting assistance.”