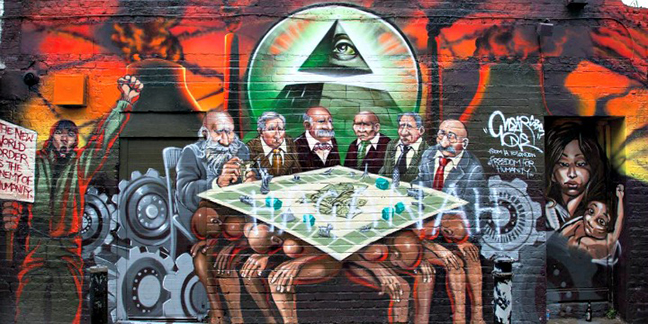 A Louisiana State Senator who was criticized this summer for a Holocaust comparison in protesting against mask mandates has drawn attention for tweeting a mural that has been at the center of international antisemitism controversies. He later deleted the retweet.

On Sept. 2, Rep. Danny McCormick tweeted a version of “Freedom for Humanity,” a mural by left-wing artist Kalen Ockerman, which showed a group of bankers drawn as Jewish stereotypes playing a game reminiscent of Monopoly with the board resting on the backs of hunched-over naked figures. The mural had been on a wall in east London and caused a controversy before it was removed.

Jeremy Corbyn, former leader of the Labour party, opposed the mural’s removal in 2012, saying he could not see how the imagery could be construed as anti-Jewish. During the Labour antisemitism scandal in 2018, he apologized for those remarks, saying he had not looked closely at it.

Even the artist confirmed the intent, saying “Some of the older white Jewish folk in the local community had an issue with me portraying their beloved #Rothschild or #Warburg etc as the demons they are.”

The version tweeted by McCormick included the slogan “All we have to do is stand up,” and he commented that “public opinion controls politics.”

Rep. Mark Wright of Covington, also a Republican, tweeted that “Antisemitic imagery and language have no place in Louisiana politics. I hope my House colleague did this unintentionally, but it needs to be taken down and repudiated.”

After being criticized for the tweet, McCormick removed it the next afternoon.

The South-Central Region office of the Anti-Defamation League said after two disturbing incidents, McCormick needs to “make clear he rejects these views. Now.”

The ADL called on him “to use his elected office constructively, rather than as a platform to make hateful statements that target vulnerable communities and further the divide in our community.”

McCormick has been highly critical of mandates dealing with the Covid-19 situation, and launched Operation Golden Arrow “to re-open our state and restore liberty to Louisiana.” On Sept. 5, he posted a video asking for signatures on a petition to keep the state from mandating a Covid-19 vaccine “against your will.”

His previous controversy came when he posted a video to his Facebook page in early July. McCormick emphasized that “Masks aren’t bad. Mask mandates are.”

He said that the mandate was shredding the Constitution and individual liberty, and made the statement while firing up a chainsaw that he then directed toward a mask hanging next to him. “This isn’t about whether you want to wear a mask or you don’t want to wear a mask. This is about your right to wear a mask, or not,” he said.

Saying “government needed a villain,” he added, “People who don’t wear a mask will be soon painted as the enemy. Just as they did to Jews in Nazi Germany. Now is the time to push back before it is too late.”

At the time, he told KTBS that he was not talking about Jews, but about demonization and painting people as villains, “not that this is equal to the Holocaust.”

McCormick has not commented about the mural controversy.