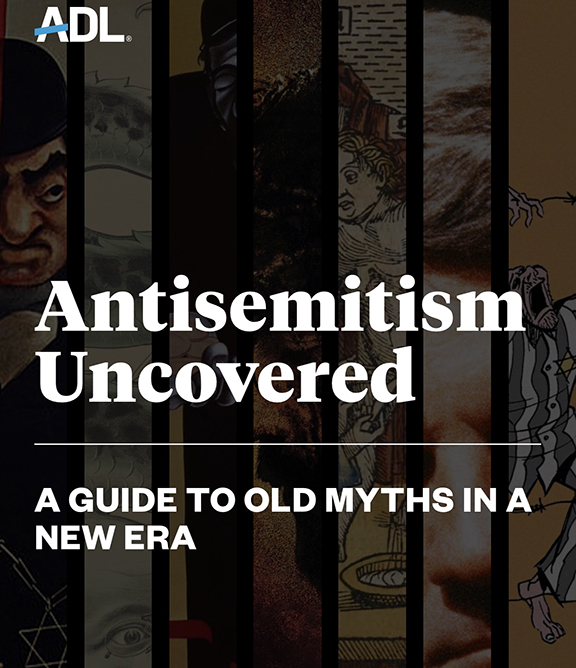 This simple truth was at the heart of one of many interesting observations made during a Sept. 9 webinar, sponsored by Tulane University, that probed contemporary antisemitism.

Three panelists — the national head of the Anti-Defamation League and two prominent academics who have studied antisemitism — offered an array of insights, triggered by a new ADL publication, “Antisemitism Uncovered: A Guide to Old Myths in a New Era.”

ADL is considered to be the world’s leading monitor of antisemitism. In May 2020, ADL reported that in 2019, the American Jewish community experienced the highest level of antisemitic incidents since tracking began in 1979, with more than 2,100 acts of assault, vandalism and harassment reported across the United States.”

All three webinar participants worked on this new ADL publication, which is designed to help people better understand the historical roots of anti-Jewish attitudes and behavior and how, despite its recent upward surge, there really is nothing new under the antisemitic sun.

The program, moderated by Tulane assistant professor of Jewish Studies Golan Moskowitz, featured a conversation among Jonathan Greenblatt, executive director of the ADL; historian Jonathan Sarna of Brandeis University; and Magda Teter, professor of history and Shvidler Chair in Judaic Studies at Fordham University. The event was sponsored by the Tulane Department of Jewish Studies.

An important aspect of the discussion focused on the Internet and how social media empowers and promotes antisemitism, though it was noted, importantly, that mass spreading of antisemitism did not begin in the 20th century with the Internet.  Rather, it began in the 1400s with the advent of the printing press — which not only provided an unprecedented tool for sharing anti-Semitic tropes and propaganda via the printed word, but also for anti-Jewish illustrations.

It was an intriguing comparison intellectually and an important comparison tactically, suggesting that those who want to ascribe the current upsurge in antisemitism to the Internet risk missing some of the more subtle factors.

These factors, as identified by the panelists, included Jews and others not fully recognizing the problem of antisemitism today; the politicizing of antisemitism, which diminishes its impact by turning it into a political issue; leaders in government, entertainment and sports not speaking out quickly and decisively enough to condemn antisemitism; and personalities and celebrities with broad and influential platforms not realizing the full implications and history of their anti-Jewish remarks and actions.

“Antisemitism Uncovered,” according to ADL,  “is a comprehensive resource with historical context, fact-based descriptions of prevalent antisemitic myths, contemporary examples and calls-to-action for addressing this hate.”

A goal of “Anitsemitism Uncovered,” according to Greenblatt, is to sensitize as many people as possible to the thematic areas covered, so that they have a greater understanding of the insidious background and harmful effects of antisemitism.  A cornerstone of “Antisemitism Uncovered” is the belief that by educating about the hatred and violence against Jews through these age-old stereotypes generated over the centuries, people today will become more attuned to combating what may seem to be random and potentially harmless antisemitic remarks.

The specific anti-Jewish myths that the new ADL publication explores

include Jews have too much power; Jews are disloyal; Jews are greedy; Jews killed Jesus; Jews use Christian blood for religious rituals; The Holocaust didn’t happen; Anti-Zionism or criticism of Israel is never antisemitic. Each section includes historical and contemporary context and strategies for responding.

“We are operating in a moment right now where antisemitism unfortunately is on the rise,” Greenblatt told the webinar audience.  Compounding it is Covid, Greenblatt added, with some elements of society irrationally blaming Jews for the pandemic and, in some cases, suggesting they are profiting from it. Jewish greed, it was noted, is a classic anti-Semitic stereotype going back centuries.

Historian Sarna said, “I think we can see a large generation gap in the way recent events have been seen.  For young people, it was a complete surprise to see antisemitism. What they had heard was American Jews had become ‘white folks’ and they had come to believe that antisemitism had ended.” History shows that antisemitism is cyclical, and often is a reflection of  larger social problems, which helps explain what is going on today, said Sarna.  For older people, the reappearance of antisemitism was less surprising, he added.

Today, many observers believe that antisemitism is coming from three sources that otherwise have little in common ideologically — the far right, far left and radical Islam. “They are certain their problems are caused by the Jews,” said Sarna.

Panelist Teter recently wrote a book on the blood libel — the false accusation that began centuries ago, claiming that Jews use the blood of Christians, and Christian children in particular, for ritual purposes. When she started on the book, Teter thought she would be mainly doing historical research. Today, because of what she sees as behaviors reflecting ancient anti-Jewish myths and attitudes, she says, “I find myself in the twilight zone” — in a surreal and unimaginable situation.

She envisioned her book focusing on the 15th to 18th centuries, yet it begins with ADL calling on Facebook to shut down a site promoting the myth of Jewish ritual murder. In 2019, she notes almost in disbelief, white supremacists are referencing accusations made in Italy in the 1400s to justify their hatred of Jews. “My book, sadly, is very relevant to what’s happening in America today.”

Those who have enlisted in the fight against antisemitism face two obstacles, Greenblatt observed. “I think we live in a charged moment where everything is politicized, and we shouldn’t be surprised that antisemitism is a partisan tool, whether it comes from the left or right.  And when it becomes a political cudgel, the Jewish people lose.”

The second obstacle, the ADL director said, is that given the heavily-publicized prejudices that other groups face, such as Blacks, people downplay antisemitism, asking, “Is it really a problem?”

Clearly, from this thought-provoking webinar and the conversation among these three experts, the answer is yes. It is really a problem.