After summer of shutdowns and fiscal uncertainty, regional camps determined to open for 2021 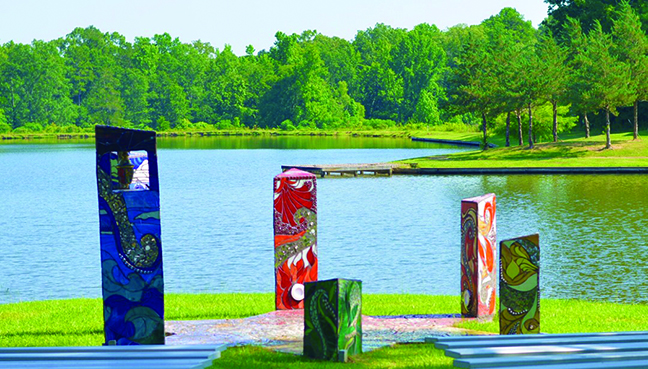 On a typical Friday night in the summer, campers dressed in white follow a guitar-wielding song leader near Utica, singing their way to welcoming Shabbat.

On Saturday evening near Clayton, Ga., hundreds fill the amphitheater for a Havdalah service that turns into a lengthy, high-energy Israeli music dance party that would exhaust a Zumba instructor.

This summer, though those sounds did not echo in the valleys or across the fields, as most summer sleepaway camps cancelled their sessions due to the uncertainty surrounding the coronavirus pandemic.
Anna Herman, director of the Henry S. Jacobs Camp in Utica, said that all summer, “walking from the house to the office, I had to put blinders on and pretend” that the camp wasn’t empty. “It was so depressing.”

Also depressing for camp supporters was the thought, back in the spring, that without a summer session, many camps could be forced to close permanently. But camps in this region report that though the year has been a huge struggle, they are in decent shape heading into what they hope is a more normal 2021.

Camps in the region instituted several measures to ensure that their doors would be able to open in 2021 and beyond, from asking parents to roll over their 2020 tuition to the 2021 session rather than ask for a refund, or even make the 2020 tuition an outright donation, to launching fundraisers, participating in a major matching grant program from the Harold Grinspoon Foundation and seeking other grants.

The camps also received allocations from the Paycheck Protection Program.

Though the bulk of activity is during the summer, camps are year-round operations, with staff expenses, recruitment activities and continual maintenance and insuring of facilities. By the time summer starts, a substantial portion of the year’s revenue has already been spent.

Jacob Fijman, development manager at Jacobs Camp, said in April they forecasted that the camp would lose $850,000 by cancelling summer sessions.

Herman said “not having summer revenue could potentially close the camp forever… we are so beyond lucky to have a community that says we will not let that happen to Jacobs Camp.”

On Aug. 27, they announced their Sustainability Campaign had raised over $980,000, and they were the first camp in the Reform movement system to meet its campaign goal. Now, the camp is shifting focus to 2021 scholarships and Covid protection supplies through a “Road to Welcome Home Campaign.”

Jacobs Camp staff also had three weeks of furloughs and pay cuts to help make it through.

At Ramah Darom, which is set up as a summer camp and year-round retreat center, 80 percent of the annual income comes from camp and the Passover Retreat, both of which were cancelled this year.
Because of the “substantial impact” of the shutdown, Ramah Darom CEO Walter Levitt said they launched an emergency fundraiser, and “many generous foundations, donors and Ramah Darom families have helped us weather the storm.”

Camp Barney Medintz, located in Cleveland, Ga., said the summer was “a serious challenge.” The sleepaway camp of the Jewish Community Center in Atlanta relied on their close ties with the Grinspoons, help from the Atlanta Jewish Federation, camp families, alumni and foundations from around the country.

Camp Barney Director Jim Mittenthal said “we are extraordinarily grateful for the support we received” and they are in “a good place” for operating in 2021.

In addition to the fundraising, Ramah Darom decided to generate activity by holding Mishpachah B’Ramah, a series of physically-distanced family getaways. The two, three or five night all-inclusive kosher getaways were held throughout August and are being planned for Sukkot, Thanksgiving, Winter Break, New Year’s, King Weekend and President’s Day Weekend. There will also be a women-only weekend in November and an adult-only Shabbat in February.

The retreats are limited to about 50 people, who maintain distancing outside of their own family units, but the entire camp facility is open to participants.

Geoffrey Menkowitz, Ramah Darom director, said the getaways were designed as “a respite in a safe place for families in need of a break and change of scenery.”

With so much uncertainty in the early days of the pandemic, Jacobs and Ramah Darom cancelled their sessions on April 30; Camp Barney followed two weeks later.

According to the American Camp Association, between 20 and 30 percent of overnight camps nationally opened this summer.

Not every opening was successful. Camp directors throughout the region noticed the experiences of YMCA Camp High Harbor in north Georgia, located just a few miles from Ramah Darom. That camp required only a negative test within 12 days of arrival, and though social distancing was promoted, masks were not required for campers. Two days after the camp opened, a teen counselor who passed the initial screenings came down with symptoms and tested positive. They started sending campers home, and the camp closed six days after opening. Out of 344 from the camp for whom test results were available, 260 tested positive.

Seth Herschthal, third-generation owner of Blue Star Camps in Hendersonville, N.C., which did have a session this summer, simply said “our approach to opening was different from theirs.”

With the cancellation of summer sessions, the camps were thrown into a world “that hasn’t been our core business,” Mittenthal said — providing an online connection.

Camps are “experts in in-person immersive programming, and we just ran into this new remote space,” Herman said.

About 200 Barney staff and alumni started working on a summer of virtual events several days each week, including a major weekly event, such as a concert. One week, Mittenthal interviewed Rich Recht, who then did a concert for the camp families.

They launched a S’Bread The Love challenge to bake challah for friends and neighbors, and had a community art project to decorate leaf templates for a community tree art project. There was also an Israel Day and a Virtual Color War.

Ramah Darom did Kayitz BaBayit, “Summer at Home,” with four weeks of online events coordinated by age groups. Most days there were live small bunk activities or community programs, and on Tuesdays a range of pre-recorded activities were uploaded. Camp-wide Kabbalat Shabbat and Havdalah were centerpieces each week.

In all, 435 campers and 90 volunteer staff participated in the virtual camp. Audra Kaplan, associate camp director, said “that far exceeded what we were planning,” and it really brought the community together.

The oldest campers, Gesher, had their own programming and leadership development sessions. Over 40 of them became counselors in training to assist with the younger camper programming, and Kaplan said that gave the Gesher campers hands-on professional development they would not have otherwise had.

When Ramah Darom cancelled, one of the most common questions was about Gesher and the campers who would miss their final year as campers. “Our hope is to bring them back to campus at the start of the summer, before the Israel Seminar,” Kaplan said.

Kaplan said it “was really touching” to see how many staff volunteered to coordinate parts of the virtual programming.

Ramah also did a virtual session for Camp Yofi, their program for campers with ASD.

Jacobs Camp launched HSJ365, with a range of activities by age group.

Herman said virtual experiences are here to stay, “no matter what happens in the future,” as the remote experiences also had the power of community and can continue year-round.

Kaplan said Ramah Darom will continue with camper engagement during the year, picking back up after the holidays. A centerpiece will still be Havdalah, with camp families volunteering to host each week.

Each year, Camp Barney has a dozen events at JCCs around the region. Mittenthal said this year, the reunion and presentation may have to be done virtually, or later than the usual November timeframe.

The lack of camp also affected the Israeli shlichim who spend summers interacting with American kids at camp.

The Jewish Agency for Israel and The iCenter launched Shlichim.IL to keep these cultural ambassadors as a central, meaningful part of the camp community.

“The bonds between shlichim and campers are incredibly special, and often very deep, even after just one summer,” says Lapid Levi, director of the The Jewish Agency for Israel Summer Shlichim Program. “These personal relationships not only are an integral part of the camp experience, but they are proven to be some of the most meaningful Israel engagement and education. Our shlichim and camps are working together to make sure campers continue to have these memorable experiences.”

Though participation had to be done online, there were still 81 Israelis who engaged in the usual training and were assigned to camps.

Danny Herz, director of 6 Points Sports Academy in North Carolina, said “Mai Ziegel has been amazing, all while recovering from the virus, and did great work bringing Israel to our campers. Guy Noga was fantastic and really showed why he is so awesome and why we and our campers love him so much. I am so happy Shlichim.IL worked out, and am so appreciative that The iCenter and Jewish Agency for Israel made this happen.”

Now, attention is shifting to a 2021 season, whatever it looks like.

Herman said the camps will “really lean on” the national organizations for best practices, especially the experiences of camps that did open this summer. They will also learn a lot by watching how schools are reopening this year.

“We are all deeply committed to a 2021 camp season. We believe it can happen” with advances in testing and treatment, Herman said.

On Aug. 26, the Center for Disease Control released a study of four Maine camps that had successful summers, explaining how they were able to operate safely.

Mittenthal said nobody can talk about next May with 100 percent certainty, but “we are driven to do everything we can.”

Many camps are opening registration this month for returning families. “It will be fun for people to start thinking about next summer,” Kaplan said, and for kids to have something to look forward to. Over 200 Ramah Darom families rolled over their tuition from this year to next summer.

Mittenthal said they are working on a playbook with different scenarios for how next summer would look, based on the amount of progress made in the fight against Covid. “By design, we are a community that is opposite from social distancing. The concept of separating people is goofy at overnight camp.”

The plan for next summer “isn’t just to get people on Camp Barney soil, it’s to have this meaningful and exciting experience, as close as possible to normalcy.”

From staff, families and campers, Mittenthal said there has been an attitude of doing whatever it takes, as they consider camp “essential in their lives, not just a place where they spend a couple weeks or a month each summer.”

Herman said “people missed camp and we missed them,” and she expects next summer to sell out.

“Nothing will be as sweet as our first opening day, when we have the kids back home” at camp, Herman said.