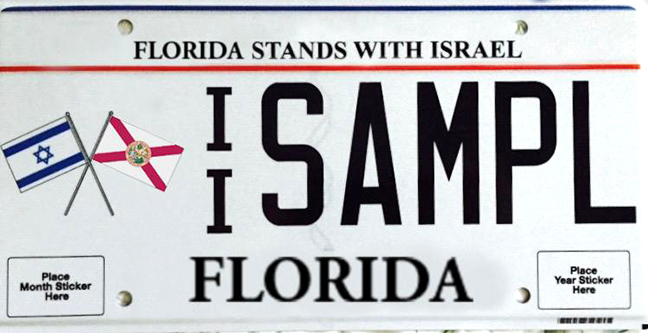 Supporters of Israel in Florida can show their drive, thanks to legislation authorizing the issuance of a Florida Stands with Israel specialty license plate.

The bill was signed by Governor Ron DeSantis on Sept. 18 as part of a bill that authorized 32 new plate designs, including university plates for Georgia, Alabama and Auburn, the “Divine Nine” Black fraternities and sororities, the Jacksonville Jumbo Shrimp, Special Olympics, “In God We Trust,” “Don’t Tread on Me,” “Beat Childhood Cancer” and Fallen Law Enforcement.

The bill also caps the state’s specialty tags at 150 and establishes procedures for phasing out underperformers.

New plates must have 3,000 pre-orders for production to begin. A portion of the revenue from the Israel tags will go to the first-responder group Hatzalah of Miami-Dade.

In Florida, most specialty tags are an extra $25 per year, and gift certificates are available for specialty plates.

In a joint statement, McGhee and Plakon said “this shows that our relationship with the State of Israel touches upon many of Florida’s most vital interests, values, and ideals. Accordingly, the overwhelming majority of Floridians support this special relationship and now have a wonderful way to celebrate it.”

The Israeli-American Council thanked DeSantis and the legislature “for this heartwarming expression of solidarity, which affirms the strong bond between the State of Florida’s citizens and the Jewish State of Israel.”

The IAC will oversee a 30-day contest for the design of the plate, coordinated by Artists 4 Israel. After a panel of judges decides on the winner, the IAC will embark on a campaign to promote pre-orders.

IAC Board Member and IAC for Action Board Chairman Shawn Evenhaim said “this kind of warmth is why Florida has always been a leading destination for Israeli-Americans. This gesture celebrates a long and close relationship.”

In 2019, DeSantis took a highly-touted trade mission to Israel.