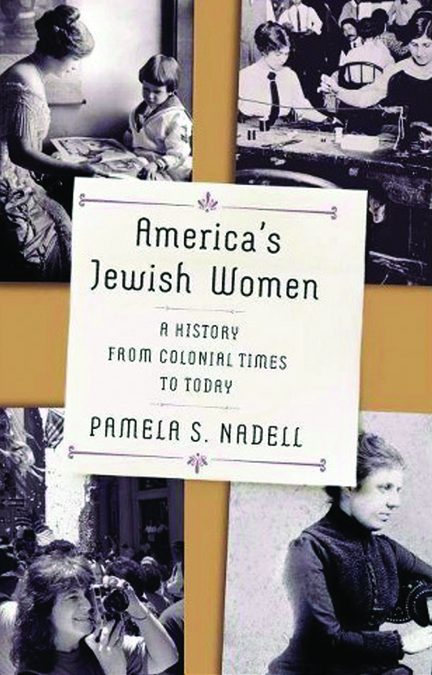 The Jewish story in America, from Colonial Times to today, is a remarkable saga. Jews, relatively few in number compared to the population as a whole, have had a disproportionate impact on nearly every facet of American life.

An important component of this story is the history of Jewish women in America, which is colorful, continually-evolving, rich with impressive personalities and reflective of what has been a constant thread of the Jewish presence in the United States: Concern and dedication to one’s own community coupled with involvement in the broader community to improve life for all.

These were among the core themes that emanated from a recent online lecture by Dr. Pamela Nadell, author of the book “America’s Jewish Women: A History from Colonial Times to Today.” The book was a 2019 National Jewish Book Awards winner. Nadell holds the Patrick Clendenen Chair in Women and Gender History at American University and is director of Jewish studies. Her books also include “Women Who Would Be Rabbis,” a National Jewish Book Award finalist.

The program was sponsored by Tulane University’s Department of Jewish Studies and Grant Center for the American Jewish Experience.

“What we learn about the past informs our present,” Nadell began, noting that many Jewish women of the past met significant crises and persevered. She began with pictures of several generations of her own family including herself, all dressed in a way that reflected the ever-changing experiences of American Jewish women. “What is stunning about these images and the way in which the clothing changed, is just as their clothing changed so had their lives changed.” In effect, these pictures were worth thousands of words culturally and historically.

Had these evolutions not taken place, neither she nor her daughter would have the opportunities they have today. “These photos guided me into our histories,” Nadell said, noting that it raised her curiosity about what life was like for her forebears. “Most of all, I wanted to know how technology transformed their lives.” She said, “think what life was like for women before their washing machines.” These changes not only affected women in her family, but Jewish and other women throughout American history.

“Most of all I wanted to know what it meant to these women in my family to be Jewish?” This question was a constant theme in her thinking and research.

The female experience, starting in Colonial times, but also throughout the history that follows, is of Jewish women embracing their Judaism in different ways. These run the gamut from Judaism and Jewish life being at the center of their lives, where religion, dietary laws, observance, governed much of their life, including who they married and how much education they got. At the other end of the spectrum are those for whom their Judaism moved to the periphery of their lives, often lingering there until external factors — such as anti-Semitism — reminded them that they were Jewish.

Nadell referenced a series of well-known women from throughout Jewish history, such as Emma Lazarus, as well as lesser-known but still influential women, and framed how life for them changed from generation to generation. These changes ranged from evolution in dietary and other religious observances, to mourning customs and to even a call “to change Judaism.” She told the story of one Jewish woman “yearning for a transformative figure — such as John Calvin and Martin Luther — to come and reform Judaism.”

What was clear early on, as Nadell continued to focus on the Colonial era, “we already see that women are going to play powerful roles in shaping American Judaism.”

Moving forward in time, Nadell shared an anecdote to reflect how dramatically Jewish women and their outlook on life changed as the decades unfolded.

She told the story of a rabbi’s wife “who did the things that rabbi’s wife’s do” — giving birth to multiple children, being active in the synagogue and creating the first Jewish women’s book club in the U.S. Yet, the author added, “She was a maverick in another way, because in 1892 she walked out on her husband.” That was radical and dramatic and posed new challenges for the woman, but she was resourceful. She had to earn a living so she founded the first Jewish English-language women’s magazine in America.

“In this magazine, she writes of this moment of transformation in Jewish life,” Nadell continues, noting that this was the era of the “birth of the powerhouses of Jewish women’s organizations,” such as the National Council of Jewish Women, which was founded in 1893.

Other organizations were emerging at the same time, Nadell continued. “I think the explanation has to do with the transformation in Jewish women’s lives.” Women were bearing fewer children, life expectancy was growing in the 19th century — “and what it means when you are living longer is now you can give back to your Jewish community.” NCJW, for example, began to embrace various causes, not just to protect Jewish women but to protect all women.

As the 1900s began, Jewish women began asserting themselves in unprecedented ways. They took advantage of the liberties that America provided to become public advocates and activists for causes they believed in. Nadell told the story of kosher meat increasing in 1902 by 50 percent a pound, putting many women in a position where they no longer could feed their families. They demonstrated, took the meat out of some of the shops and even set it aflame.

“Jewish women also were powerful activists as individuals,” Nadell added, citing one who played a prominent role in helping to combat the Spanish flu in New York City in 1918. “These are also the years of the suffrage movement and Jewish women were activists in the movement.”

As a historian, Nadell said, “I am curious during these years about what is going on in the home.” One writer at the time described what went on in her home in preparation for the Sabbath. Her mother would cook, cover her head in accordance with religious tradition, light the Sabbath candles, say the blessings — all of the things that characterize a religiously-Jewish home. Then one Sabbath evening, during candle lighting, the mother stopped abruptly in the middle of a prayer, pulled off her religious head covering and said, “No more.” Her mother never lit candles again.

Jewish women in America faced antisemitism. One of those was well-known writer Edna Ferber, for whom, Nadell said, being Jewish was inconsequential — until those around her reminded her, through their antisemitic behavior, that it was consequential. Nadell described a moment in the early 1930s when Ferber was invited to “a soiree in Michigan” and during the dinner the host started talking about “money-grubbing Jews controlling the world.” Ferber watched as everyone agreed with the host. “So she stood up and said, ‘I am a Jew’,” said Nadell. When Ferber went to her guest room that night, she not only locked the door but blocked it with a chair.

After World War II, the impact of Jewish women on American society continued to grow. Nadell made references to Bess Myerson winning the Miss America pageant in 1945, making her the only Jewish Miss America to this day. She also said that Jewish women were key leaders in the emerging women’s movement, especially noting one of its founders, Betty Friedan.

The social and political revolution of the 1960s ushered in enormous changes that affected all women, such as birth control. “Jewish women were disproportionately in the forefront of the Women’s Movement in the 1960s… there are so many examples,” Nadell noted. She pointed out that 12 percent of the members of the feminist National Organization for Women were Jewish at a time when Jews made up 3 percent of the U.S. population.

The 1950s and the 1960s were a time of “enormous transformation,” when seeds were planted, often by Jewish women, which would ripple throughout America and lead to profound changes, affecting the decades that would follow.

During the question and answer part of the program, Nadell was asked about a review of her book in the New York Times that suggested that she had overlooked cultural contributions of Jewish women, nothing that Barbara Streisand got one sentence. Nadell explained that she had to make some editing choices in writing the book, particularly because the original manuscript was twice as long as the book. She agreed about the impact of Jewish women culturally and said that she hopes someone else will write about that topic.

And, of course, she mentioned Ruth Bader Ginsburg. Nadell quoted a well-known Ginsburg comment that seems to capture the essence of Nadell’s overall historical narrative — that the role of Jewish women has evolved continually since Colonial times and continues to do so. Ginsburg said, “What’s the difference between a bookkeeper in New York’s garment district, which my mother was, and a Supreme Court justice? The difference is one generation.”