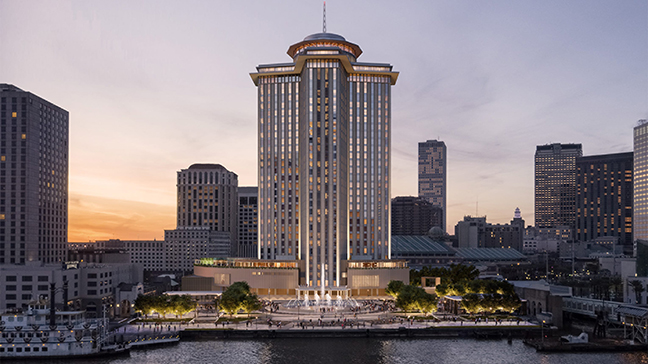 Award-winning chef Alon Shaya and his Pomegranate Hospitality will be opening a new restaurant next year, as the Four Seasons Hotel and Private Residences opens in New Orleans.

The unnamed restaurant will offer “a fresh perspective on a classic Louisiana dining experience in a festive and inviting atmosphere” at the hotel’s street level.

“There’s no question that New Orleans has long held an influential place in America’s culinary evolution,” noted the property’s General Manager Mali Carow. “Now, in partnership with Chef Alon Shaya, our aim at Four Seasons Hotel and Private Residence New Orleans is to continue that tradition, while forging an imaginative new path into the future.”

Built in 1968 for the 250th anniversary of New Orleans’ founding, the 34-story tower was originally the World Trade Center and International Trade Mart. The hotel will have 341 rooms, two signature restaurants, a spa, fifth floor rooftop swimming pool, private garden and a two-level rooftop observation deck. There will also be 92 private residences in the development.

A native of Israel who was raised in Philadelphia, Shaya, who won the 2015 James Beard Award as Best Chef in the South, first came to New Orleans to work at Besh Steak in 2001. In 2009, Shaya’s passion for Italian cuisine led him and chef John Besh to open Domenica, followed by the casual Pizza Domenica in 2014. The next year, he won the James Beard Award for Best Chef — South.

A 2011 culinary trip to Israel, organized by the Jewish Federation of Greater New Orleans, reawakened Shaya’s childhood memories of Israeli cuisine, and in February 2015 he opened Shaya, a modern Israeli restaurant that quickly achieved international acclaim. In 2016, it won the James Beard Award for Best New Restaurant.

He was forced out from Shaya restaurant and the Besh group in 2017 after being one of those who spoke out when many Besh employees alleged sexual harassment among the group’s restaurants. He first tried to purchase the restaurant, then was unsuccessful in forcing it to change its name.

He and his wife soon launched Pomegranate, with an emphasis on creating a comfortable team environment for employees. In 2018, Pomegranate announced the new Israeli restaurants.

He is also the author of “Shaya: An Odyssey of Food, My Journey Back to Israel.”

“We are very happy to work with Four Seasons, a company that shares  the love of great food and gracious hospitality with a team-first approach,” said Shaya.  “We are honored to be part of this project that will help reenergize New Orleans’ riverfront. Together, we will create a grand dining experience that celebrates Louisiana’s diverse culture and cuisine.”

Guests at the new restaurant can expect “a spirited take on beloved New Orleans dishes,” an emphasis on the abundance of Gulf seafood, vegetables and other ingredients sourced from Shaya’s extensive network of fishermen, farmers and other purveyors.