A Birmingham-New Orleans Marriage that Lifts the Jewish World 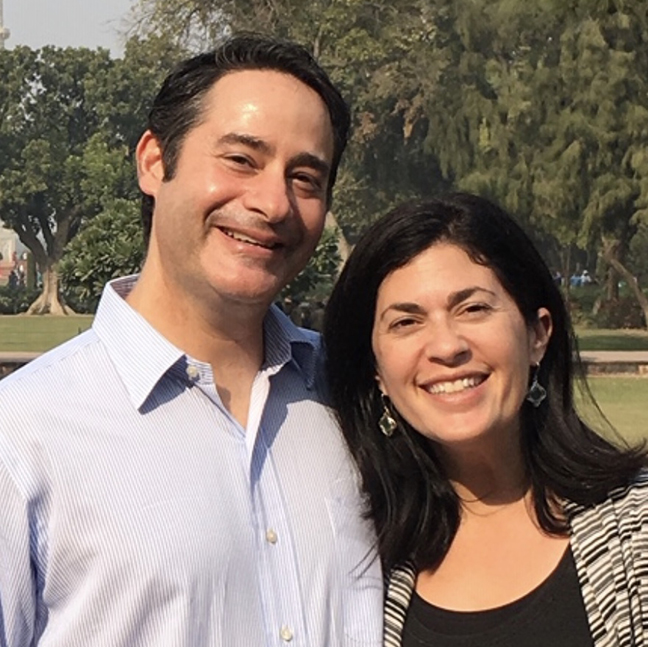 There was the day, almost 30 years ago, that a knock on the door of a University of Texas dorm room not only changed the lives of two young people forever but would eventually affect the Jewish world in ways they never could have imagined.

What prompted Judith Lazarus to knock on Brian Siegal’s door on their first day of college?

“My roommate, who I knew previously, and I were both very outgoing and we liked to meet people,” remembers Judith. “So when I got to our dorm, the first thing I did with my roommate was to knock on doors and introduce ourselves.” After meeting Brian, and realizing that though they had never met, they knew many people in common — it’s called playing Jewish geography — and Judith sensed “this guy is going to be a good friend of mine.”

They each came from families active in their hometown Jewish communities and had inherited strong traditions of service and leadership from their parents, Betty and Harry Lazarus, of New Orleans, and Bobbie and Don Siegal, of Birmingham. So, not surprisingly, Judith and Brian began running into each other everywhere — in their heavily Jewish dorm, at Hillel where they both were on the board, and at other Jewish activities on the University of Texas campus.

The two connected, became close, started dating, and then, as sometimes happens in college romances, took a hiatus. They would later reconnect for good, though, after Brian shrewdly maneuvered his way back into Judith’s life.

“We were both very involved on the Hillel board,” Judith recalls. “He would be cracking jokes, I would roll my eyes. But he always had a joke. Then we had a little bit of a rift.” It didn’t last long. “He called to solicit me for a Jewish cause. I thought that was funny. He knew I’d give and I think it was just his way of reaching out to reconnect.”

“We cemented our relationship on a Hillel bus trip from Austin to New Orleans. It was just a fun trip, though looking back it was significant because our relationship was started and strengthened through our Jewish involvement,” she notes.

Marriage would eventually follow, beginning a partnership that would lead to Judith becoming a rabbi and Brian, after starting out as a lawyer, coming to work for the American Jewish Committee, one of America’s oldest national Jewish organizations.

As their journey unfolded, they found themselves in Israel for a year in 2001. Judith was pursuing her rabbinic studies and Brian was continuing his legal education, clerking for the Israeli Supreme Court and studying at Hebrew University. It would be a

transformative year — for both the United States and Israel, and Brian and Judith. It was the year of the Sept. 11 attacks in the U.S. and the acceleration of an unprecedented war of terror and suicide bombings against the Israeli people.

That year in Israel left a profound mark on the two of them and shaped what would become for Brian a dramatic change of course professionally. He saw the devastation of the suicide bombings and other terrorist attacks first-hand, including an attack at Hebrew University that killed the girlfriend of his best friend.

“Those attacks against Israelis for being Jewish shaped what I wanted to do with my career in terms of advocacy for the Jewish community and Israel,” he explains. But he also wanted to still pursue his passion for civil rights and human rights — “to help be a bridge between the Jewish community and other ethnic and religious groups.” When they returned to New York, where Judith continued her rabbinic studies, Brian’s dual passions led him to a job with the American Jewish Committee.

Then in 2005 came another turning point — Hurricane Katrina. Knowing that this relatively new AJC staff member was from the South and his wife, especially, was from New Orleans, Brian was asked to head the organization’s Hurricane Katrina relief effort, another experience which had a profound effect on Brian — as well as Judith.

Together they brought a vision to the assignment built on assisting the New Orleans Jewish community, which was very close to Judith’s heart, and also helping the broader community. This further cemented Brian’s commitment to serve in a Jewish community leadership role that focused on building relationships with the larger community and different constituencies, purposes that are at the heart of the AJC’s mission.

As the past 15 years have unfolded, that fateful knock on the door has resulted in the Siegals becoming one of the Jewish world’s “power couples,” particularly in South Florida where they now live with their three children. Judith has served as a rabbi at Temple Judea in Coral Gables since her ordination, and became the senior rabbi in 2014. Brian serves as regional director of the AJC’s Greater Miami and Broward County office.

They also are among a notable number of Jews from Birmingham and New Orleans who have become connected through marriage, and who have gone on to make an impact in the Jewish communities where they’ve settled.

Brian’s and Judith’s love for their respective native cities, particularly the Birmingham and New Orleans Jewish communities, is evident in conversations with them. They credit growing up in these communities with playing formative roles in shaping their Jewish values and careers. Broadly similar, these two Southern Jewish communities are small but close-knit and provide a rich and supportive environment for families with children to become deeply involved in Jewish life.

Brian’s Jewish upbringing in Birmingham was heavily influenced by his parents’ commitment to public activism and social justice, and Judith was heavily influenced by the centrality of Judaism and religious life in her family. Judith also credits her family’s multi-generational involvement with the Henry S. Jacobs Camp in Utica with being an important influence in her Jewish development.

“Birmingham and New Orleans really helped solidify our values, our sense of purpose and our sense of agency,” says 47-year-old Brian as he looks back. “Growing up in Birmingham, many times I was the Jewish kid who was asked to explain the Jewish holidays and what being Jewish meant. Growing up in Birmingham, I always had a sense of belonging — both within the Jewish community and the broader community.” However, he emphasizes, “If you wanted to be part of the larger community, you had to be confident enough in your own background and yourself and be open-minded and willing to listen to others.”

Having both spouses involved in high-profile jobs in the Jewish world is not always easy. It can be tremendously rewarding to be engaged in the work as partners. However, it also can be stressful. It can take a toll on the family if not managed carefully within boundaries.

Explains Judith, “We are two working parents in demanding jobs. We have meetings in the evening that often take us away from each other and our three children. I think we do a pretty good job of balancing it out — if we can’t have dinner as a family, we try to have breakfast together. In addition, I chose my current synagogue because it is a very child-friendly synagogue and that has been important to me as we’ve raised our children.” They have two boys and a girl, ages 16, 14 and 9.

It all sounds pretty compatible, and in fact, a marriage that was beshert — meant to be. Certainly when it comes to Judaism, Israel, leadership, family and a couple’s core values.

Compatible, that is, until you get to the one other thing that’s so important in the lives of most Southerners, Jewish or not: College football. There, some differences and distinctions emerge.

How could they not when Judith, raised as an LSU fan, had a grandfather, Bernard Bennett, who was called Tigie? That’s right, Tigie — as in the LSU Tigers. Or Brian having a Tuscaloosa-born dad who bled Crimson and was the first and only Jewish Student Government Association president at the University of Alabama? Judith was actually worried that when the two families first met, this could be a deal-killer.

The even better news is that nearly 30 years ago, a young girl from New Orleans named Judith Lazarus knocked on Brian Siegal’s door.