Joe Biden, FDR and the Nazis 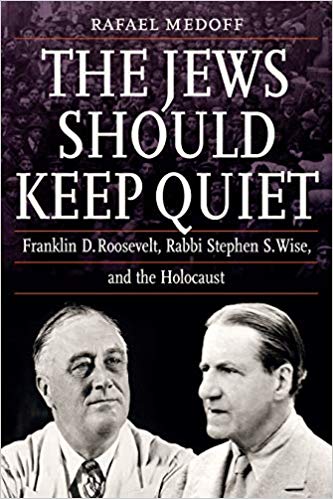 Regardless of the outcome of next week’s election, former Vice President Joe Biden will have the distinction of being the first American presidential candidate to draw attention to the U.S. government’s shameful record of friendly relations with Nazi Germany in the 1930s.

Biden’s assertion must have surprised many viewers of the debate, who likely assumed that because President Franklin D. Roosevelt led America in a war against Nazi Germany, he must have always been hostile to the Hitler regime. In fact, from the time FDR first took office in 1933, until America entered World War II in December 1941, the Roosevelt administration’s policy was to pursue cordial, sometimes even friendly, relations with the Nazi regime.

Many Americans boycotted products from Nazi Germany. But the Roosevelt administration helped Nazi Germany evade the boycott in the 1930s by permitting goods from Germany to bear labels that misled consumers as to their country of origin. The administration halted this disgraceful practice only when threatened with a lawsuit by boycott activists.

FDR also sent Secretary of Commerce Daniel Roper to address a pro-Nazi rally in New York City in 1933. At that rally, Nazi Germany’s ambassador to the United States was the keynote speaker and the podium and hall were decorated with swastika flags. In 1937, the administration sent one of its senior diplomats to represent the United States at the annual Nazi Party rally in Nuremberg.

In some instances, the Roosevelt administration actually apologized for U.S. citizens’ anti-Nazi sentiment. In 1935, the administration publicly apologized to Adolf Hitler after a New York City judge released protesters who tore a swastika flag off a visiting German ship. Then, in 1937, when New York mayor Fiorello La Guardia called Hitler a “brown-shirted fanatic who is threatening the peace of the world,” Roosevelt’s secretary of state expressed the U.S. government’s “regret” over “utterances calculated to be offensive to a foreign government.”

Roosevelt repeatedly compelled Secretary of the Interior Harold Ickes to remove critical references to Hitler from his speeches. For example, in the draft of his May 1935 commencement address at the University of Alabama, Ickes described universities in Nazi Germany as “mere bond slaves to a strutting and vainglorious Nazism” and those in Fascist Italy as “permitted to teach only what the government permits them to teach.” The White House informed Ickes that “it is the President’s request that the references to the foreign countries be entirely eliminated.”

Likewise, in November 1938, Ickes submitted to the White House a draft of his planned radio broadcast responding to the Nazis’ Kristallnacht pogrom against German Jews. “The draft as submitted was approved,” Ickes noted in his diary, “except that the President wanted us to cut out all references to Germany by name as well as references to Hitler, Goebbels, and others by name.”

President Roosevelt did not approve of Hitler’s anti-Jewish policies, but he feared that any U.S. criticism of the Nazi regime would harm American-German relations. In the 430 press conferences that FDR held from January 1933 until September 1938, he never criticized Hitler’s persecution of German Jews. In fact, the oppression of the Jews was mentioned in just one of those press conferences — and only because a reporter, not the president, raised it. Roosevelt replied that he had no comment and quickly changed the subject.

According to the research of Professor Stephen Norwood, the Roosevelt administration welcomed Nazi warships to visit American ports in the 1930s. Two German navy cruisers, the Karlsruhe and the Emden, were sent to visit the United States on multiple occasions between 1934 and 1936, in order — as the captain of the Karlsruhe put it — to “carry into the outside world something of the spirit of the New Germany.”

The Karlsruhe brought along 2,000 copies of Hitler’s Mein Kampf to distribute in the United States. The Nazis hoped these friendly naval visits would “end once [and] for all the rumors and propaganda which had been spread abroad” concerning the persecution of German Jewry. The Nazi warships were greeted by senior U.S. military and naval officers and were often accompanied by a twenty-one-gun salute. The U.S. navy even provided boats, personnel and equipment to assist the Nazis in carrying out military exercises off the Los Angeles coast.

Sometimes FDR’s pre-war policy of maintaining good relations with the Nazis directly interfered with the rescue of Jewish refugees. In 1940–1941, the American journalist Varian Fry led an underground network in Vichy France that rescued more than 2,000 refugees — until Washington intervened. Responding to complaints by the Nazis and the Vichyites, the Roosevelt administration forced Fry to leave France on the grounds that he was “carrying on activities evading the laws of countries with which the United States maintains friendly relations.”

Franklin D. Roosevelt’s troubling policy towards Nazi Germany in the 1930s has received too little attention. Hopefully, Joe Biden’s remark will stimulate a long-overdue national conversation about this important topic.

Rafael Medoff is founding director of The David S. Wyman Institute for Holocaust Studies and author of more than 20 books about Jewish history and the Holocaust. His most recent book is “The Jews Should Keep Quiet: Franklin D. Roosevelt, Rabbi Stephen S. Wise, and the Holocaust.” This piece originally appeared in the Jewish Journal of Los Angeles and is reprinted by permission of the author.