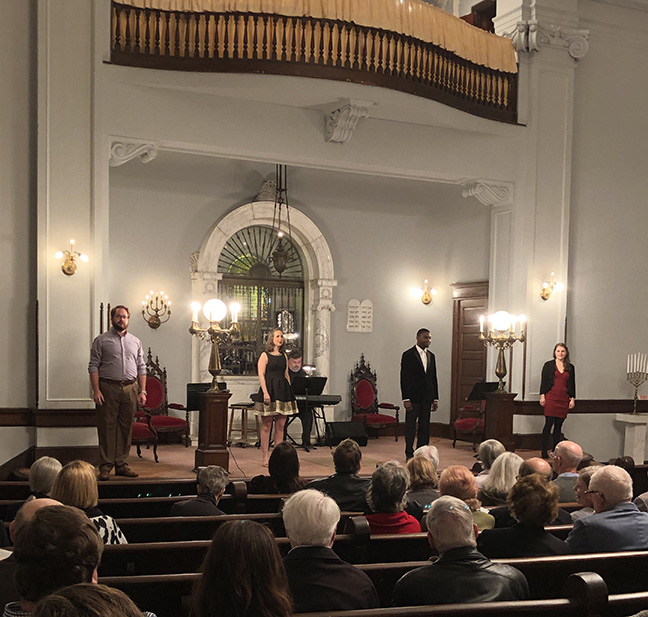 From a Jan. 9 concert at B’nai Israel, Natchez

As work continues to preserve Temple B’nai Israel in Natchez, a GoFundMe campaign has been launched to raise $150,000 to access a matching grant from the state for the next phase of renovations.

The B’nai Israel Board of Overseers, in partnership with the Goldring/Woldenberg Institute of Southern Jewish Life in Jackson, started the campaign to match a Community Heritage Preservation Grant from the Mississippi Department of Archives and History that will see the complete replacement of the building’s outdated, century-old electrical system and the installation of a much-needed fire suppression system. This phase of the project will cost around $430,000.

Nora Katz, director of heritage and interpretation at ISJL, said this phase “is crucial to realizing our goal of opening the synagogue as a community gathering place, hub for the arts, and interpretive center.”

With just 10 members left in the congregation, there has been an increase in cultural offerings at B’nai Israel. The Southern Jewish Historical Society held its 2016 conference there, there is an annual “Cabaret Under the Dome” concert, and in 2018 there was a production of Mark Twain’s “The Diaries of Adam and Eve.”

The first phases of the renovation included a wheelchair ramp along the side of the building, providing access to the sanctuary. The roof and dome have also been restored.

After replacing the electrical system to meet fire codes, the HVAC system will be replaced. Also on the to-do list is an elevator and accessible bathrooms, and a catering kitchen and exhibit space “so the temple can serve the Mississippi community as an event venue,” Katz said.

B’nai Israel was the first Jewish congregation in Mississippi, with roots going back to 1840. It was a charter member of the Union for Reform Judaism in 1873 and completed its first building on the current site in 1872. That building burned in 1903 due to faulty wiring, and the current building was completed in 1905.

B’nai Israel’s Beaux-Arts building with an Italian marble ark is listed in the National Register of Historic Places as a contributor to the On-Top-of-the-Hill Historic District, and was named one of Mississippi’s Ten Most Endangered Historic Places in 2017. The Temple has received two Community Heritage Preservation Grants from the Mississippi Department of Archives and History, and is a partner of the Historic Natchez Foundation.

“We are so grateful to have the partnership of the Mississippi Department of Archives and History as we embark on this ambitious historic preservation project,” said Katz. “But we need widespread community support in order to make our vision for the Temple a reality. The COVID-19 crisis has challenged us to find new and innovative ways to raise awareness about this important project.”

The campaign is here.