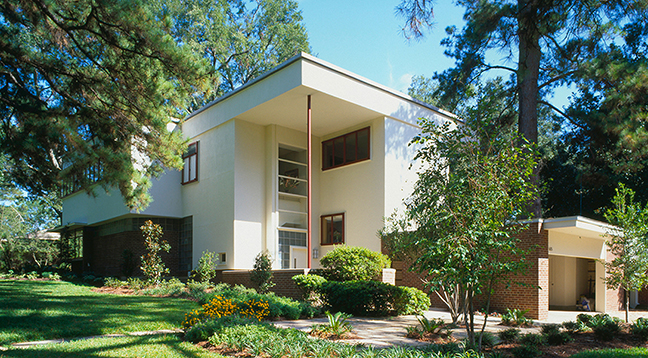 After a red-carpet premiere was delayed twice due to Covid-19, “Unexpected Modernism” will have its world debut online on Nov. 12, and filmmaker Gregory Kallenberg is excited at the opportunity to debut the film to a much wider audience.

The 43-minute documentary tells the story of Jewish architects Samuel G. and William B. Wiener, half brothers from Shreveport, whose modernist designs of residential, institutional and commercial buildings from the 1930s through the 1960s made Shreveport an early hub of International Modernist design in the United States.

In the late 1920s, they traveled to Europe and brought the Bauhaus influence back with them “influencing all the architecture in the city,” Kallenberg said.

The original premiere was set for April 2 at The Strand Theatre in Shreveport, which is also a story of two Jewish brothers from Shreveport. The Strand opened in 1925, developed by Julian and Abe Saenger. It would be the flagship location of what became a 320-theatre chain across the region. The Saenger brothers moved their operations to New Orleans in 1927 and then sold the chain to Paramount Publix.

In 2017, Stacey Pfingsten, executive director of the Louisiana Architecture Foundation, found the book “The Modernist Architecture of Samuel G. and William B. Wiener,” by Karen Kingsley and Guy Carwile. Amazed at how little awareness there was about the Wieners, even among architects, Pfingsten and the LAF board decided to have the documentary made. They approached Kallenberg, founder of the Louisiana Film Prize, and producers Chris Lyon and Rachael Hansil.

“At the time I wasn’t a big architecture fan or knew much about it” beyond driving around and being able to say “that’s a house that doesn’t fit in here,” Kallenberg said. He did a “deep dive” into the subject and was “astounded” at what he learned. Having the Jewish connection in northwest Louisiana was an added bonus.

“Being able to do something on these gentlemen, who did something so incredible for this area and bring it to the big screen is such a huge honor for us,” he said.

He said people in Shreveport are used to seeing the buildings all over town and don’t think much about it. Now that he knows more about it, “you can’t unsee it.” And, he added, the city is “very lucky” that so many of the structures not only have been preserved, but are still being used and lived in.

The film “is an enlightening and long-overdue tribute to two incredible Shreveport architectural trailblazers who made our community among the first American launch sites, of sorts, of the early 20th century modernist movement,” said LAF board member and Shreveport architect Mischa Farrell, AIA. “It is our hope that this powerful film will rejuvenate an appreciation for modernist architecture, its preservation in Shreveport, and the priceless contributions of the Wiener brothers.”

Having the film premiere online instead of at the Strand is one opportunity created by the pandemic, Kallenberg said. The film can raise awareness of Shreveport’s architectural riches among those who travel to see such things. “There are people all over the world who travel to places like Fallingwater,” a Frank Lloyd Wright creation in Pennsylvania. “Shreveport has this incredible opportunity, it is this undiscovered architectural tourist destination that this film will shine a light on.”

He recalled driving Dallas Morning News architecture critic Mark Lamster, a New York native, around town, and when they passed one particular building “he almost jumped out of the rolling car” and exclaimed that he’d never seen a Bauhaus-inspired office building that large.

Among the film’s sponsors are the Evolve Foundation and the North Louisiana Jewish Federation. The Federation especially took an interest in the Wieners’ roles in the Jewish community.

The film includes interviews with Wiener family members, architecture experts and the book’s authors. After the premiere, Kallenberg said they will talk with other groups that can show the film. “Our job is to get this film seen.”

The premiere is Nov. 12 at 7 p.m. Tickets are $30, and the film can be viewed at any point within seven days, though once one starts the film, it needs to be watched within 24 hours. A post-film question and answer session will be at 8 p.m., and can be viewed at any time through Nov. 19.