From Birmingham to the Vikings: The Wilf family story 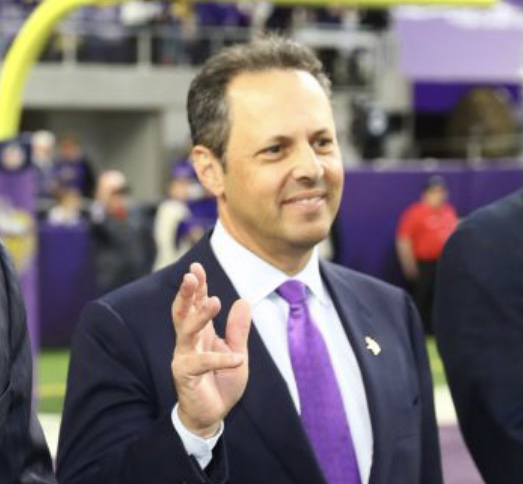 Birmingham, New Jersey, the National Football League and a Zoom call reconnecting friends after 70 years. These are just some of the elements in a story marked by humility, prosperity and gratitude.

It’s the story of the Wilf family and how in the post-Holocaust era, survivors Suzy and Joe Wilf left Europe and landed in Birmingham in 1950 — on July 4, fittingly enough — with their infant son and little else, ready to begin a new life.

They were met at the airport by a representative of the United Jewish Fund, the forerunner of the Birmingham Jewish Federation, and taken to an apartment which UJF had rented and furnished for them.

The Wilfs, a young couple in their 20s, were among a cluster of Holocaust survivor families resettled in Birmingham in the wake of World War II. This was part of a national effort to resettle Holocaust survivors in local Jewish communities. Jobs would be found, English would be taught, financial aid would be provided; all with the goal of helping these fellow Jews begin new lives and enter the American mainstream.

Some would stay in Birmingham and some, such as the Wilfs, would move on. Suzy and Joe left Birmingham after a year. They wound up in New Jersey, where Joe’s brother Harry would resettle as well. That’s where part two of this story begins.

The Wilf brothers — smart, hungry and ambitious — embraced the American dream full-throttle and built a business, Garden Homes, which over time became the country’s largest home builders. They prospered beyond what they ever could have imagined. Suzy and Joe and the Wilf family would become one of the American Jewish community’s wealthiest and most generous families.

Joe and Suzy also became big-time NFL fans, attending New York Giants games with their sons as the boys were growing up. It was there, in Yankee Stadium, where the Giants played, that the dream of owning a NFL team was planted.

In 2005,  Zygi Wilf, the infant son who came with his parents to Birmingham, and his younger brother Mark put a group together to buy the Minnesota Vikings. Today, though still involved with Garden Homes, Zygi is the Vikings’ board chair and Mark is the team’s president.

Mark also has found time for Jewish causes.  Currently he is board chair of Jewish Federations of North America, an important volunteer role. Mark provided a recent online update for the Birmingham Jewish Federation.

He also talked about his family’s connection to Birmingham and their gratitude for the help extended to his parents, Joe and Suzy, when they arrived in America. Joe is deceased, but Suzy was excited Mark was speaking to a Birmingham group.

It brought back memories for her, including their friendship with another young couple, Helen and Szymon Nagrodzki, also Holocaust survivors who were resettled in Birmingham. Though Helen and Szymon are deceased, a Zoom call was arranged for Mark, Suzy and the three grown Nagrodzki children — Louise Abroms and Paul Nagrodzki of Birmingham, and Shirley Willcher, who lives in Maryland — to meet.

From the minute the call began, Suzy beamed. The emotion was apparent as she reached back 70 years to reflect on a time of extraordinary challenges and transitions for their respective families.  It was almost as if long-lost family members were reconnecting. Suzy, with a precise and vivid memory, recounted their friendship with Szymon and Helen. She even remembered Shirley as a toddler.

Pictures were shown back and forth and Suzy was curious about the Nagrodzki children, wanting to know about their lives.

“The weather was too hot!” she said, laughing.  Weather aside, they also were bothered by the racial segregation of that era, especially since they had been victims of discrimination and hatred themselves.

As Mark had done during the BJF program, his mom reiterated the family’s gratitude to the Birmingham Jewish community for helping to give them a new start.  Both the Wilfs and Nagrodzki children talked about how grateful they are to be Americans.

Even with all they have achieved, the Wilfs carry themselves with humility and a warmth that puts other people at ease. It is especially important to Mark, now 58, that the next generation of the family and generations beyond remember their family’s story and the importance of Jewish people caring for one another.

As the call ended, it was noted that Paul Nagrodzki was wearing a purple shirt — the color famously associated with the Minnesota Vikings.  “It’s in your honor,” the Wilfs were told. Mark smiled, and with a son’s pride noted that his mom still follows the team religiously.