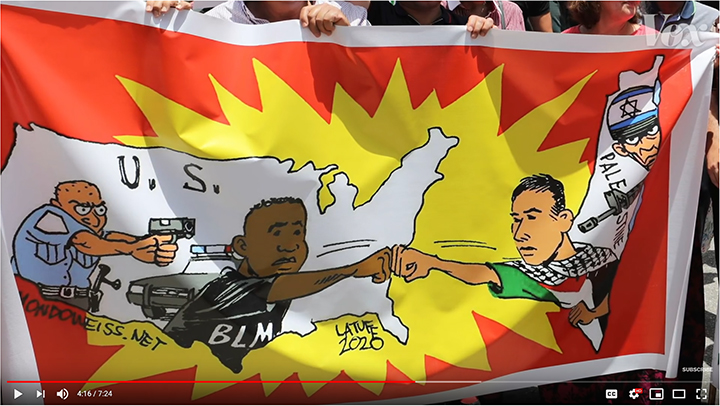 The focus of the Vox video is the long and difficult road traversed by activists who recently succeeded in having Mississippi redesign its state flag. The pending flag features a white magnolia blossom and the words “In God We Trust.” Its adoption was approved by state referendum on Nov. 3, and will become the official state flag once a related bill is passed by the state legislature.

The new flag will replace the old Confederate-themed one that had been adopted in 1894, which made many African-Americans feel like second-class citizens as, to them and many others, it represented the enslavement of their ancestors.

The short film explains that the campaign in Mississippi got a significant boost following the killing by a white police officer of George Floyd, an unarmed black man who lived in Minneapolis, Minn. The incident, the Vox video stresses, “spark[ed] widespread protest against police brutality and systemic racism.”

Nevertheless, the image above, a cartoon from the virulently anti-Israel site Mondoweiss, is shown immediately thereafter.

As the frame appears, one of the leaders of the initiative to have Mississippi’s flag changed states in reference to the demonstrations across the U.S.: “People were forced to look at… what has happened here in America when it comes to state-sanctioned violence against black people.”

From Mississippi to Ramallah in the Blink of an Eye

In an instant, this educational video veers from America’s centuries-old struggle to effectively combat racism to questioning Israel’s legitimacy.

First, the entire map of Israel in the image is labeled as “Palestine.” Additionally, the Israeli soldier is shown pointing a machine gun at what is supposedly meant to represent an unarmed and non-threatening character. This Palestinian “victim” is extending his fist to a black American, thereby insinuating that they are engaged in identical causes.

The daily complexities that Israel, a modern, democratic nation must deal with when trying to protect its citizens after experiencing decades of Palestinian terrorism are simply ignored.

Does Vox Have an Anti-Israel Blindspot?

Had the producers of “The 126-year fight to change Mississippi’s Confederate flag” done some background research, they would have uncovered that there is an actual connection between U.S. police officers and Israeli security officials — and it is a positive one.

The Jewish state sends people across the world in order to train members of law enforcement agencies to avoid using unnecessary violence or allowing prejudices to influence their decision-making processes while on the job. For example, Israeli security services have by necessity become experts at using crowd control measures, especially in populated urban centers, to disperse rioters.

Indeed, a major proponent of this training is former President Barack Obama.

In 2014, he became so concerned about the surge in civilians being harmed in exchanges with police that he dispatched to Israel the Joint Chiefs of Staff as part of the “Lessons Learned” project.

From Education to Propaganda in Four Seconds Flat

Vox’s YouTube channel has over 8.87 million subscribers and over 2.2 billion views as of Nov. 12. With such a large audience comes great responsibility. And while the image demonizing Israel was on screen for only four seconds, it undoubtedly left an impression on many of the 500,000-plus individuals who had already watched it. They, in turn, may now view Israel in a totally distorted manner.

Moreover, the use of such imagery detracts from the film’s primary goal: namely, to educate Americans about their past so that a process of healing and reconciliation can be accelerated, thereby hopefully ushering in a brighter future for all.

But by conflating events in Mississippi, Minneapolis and other parts of the United States with Israel, Vox does no “social  justice;” rather, it has provided ammunition to hate-filled BDS supporters and, more broadly, anti-Israel groups.

This article originally appeared on Honest Reporting and is reprinted with their permission.