We were slaves in Egypt… and Alabama: Rabbi honors relatives in Alabama pilgrimage 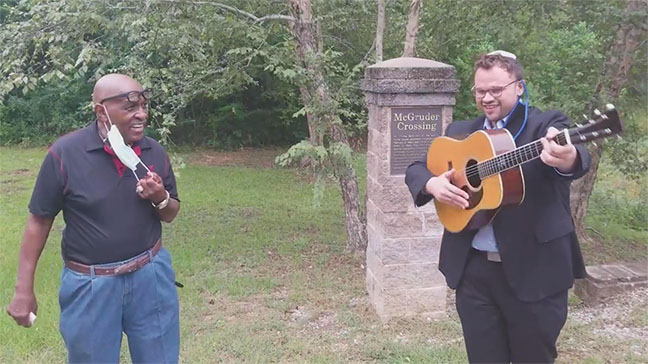 Juan McGruder Sr. and Rabbi Isaiah Rothstein sing “He’s Got The Whole World In His Hands” at McGruder Crossing in rural Alabama

For most rabbis, the week before Rosh Hashanah is a time of polishing sermons and preparing logistics for the busiest time of the Jewish year. This year, Rabbi Isaiah Rothstein spent that week exploring his roots in his first visit to Alabama, and paid tribute to his cousin on the anniversary of her death, at the church where she and three other girls were murdered by a Klan bombing in 1963.

Raised in a multi-racial Chabad family in Monsey, N.Y., Rothstein sees himself as a bridge among many cultures, and recently joined the Jewish Federations of North America as rabbinic scholar and public affairs advisor — and in a summer of racial turmoil in the United States, he has been very busy as a speaker and consultant.

“If I didn’t already know this work is bigger than me, I’m reminded several times a day just how much work there is for us to do and we should be doing,” he said.

And it isn’t just him doing the reminding — he said he hears the voices of his ancestors calling him to take action, with his own story as a focal point.

Rothstein represents a wide range of ancestries woven together. His maternal grandmother was descended from Nicholas Gibbs, who fought in the Revolutionary War. She came from a German, Scotch and Dutch background, and married a Black man. His mother, Tanya Maria Robertson, grew up Methodist but converted to Judaism, then married a Chabadnik who had grown up in a secular Jewish family that came to the U.S. to escape pogroms in Russia.

If the last name of Robertson rings a bell for those in Birmingham, it is because one of the four girls killed in the 16th Street Baptist Church bombing in 1963 was Carole Robertson — a cousin.

Rothstein’s grandfather’s grandfather was Charles McGruder, who was one of the “prized slaves” of the McGruder family and was a slave breeder on several plantations in the Sawyerville area, about 40 miles south of Tuscaloosa. It is believed that Charles McGruder fathered over 100 children, and there is a large population of the “Black McGruders of Alabama” descended from him.

With Rothstein’s multiple heritages, Passover has been a time where he feels the legacy of being a slave in Egypt — and in Alabama. He refers to Martin Luther King Jr. Day as a very important holiday for him, as it represents “the story of American liberation during a period of oppression and deep hatred.”

As he is light-skinned, growing up in Monsey he could pass for white — until his mother walked into the room. Among the Black McGruders, he jokes that he is regarded as the “white sheep” of the family.

He has witnessed racism from those who assume he is white, and been on the receiving end of it from those who find out he is Black. He has commented that being an “undercover brother” is both a superpower and Kryptonite.

In his work, he wants to be “a conduit for bridge building, relationship building and human connections… once we have a relationship, anything is possible.”

He added “we’re losing some of that — the sense of human connection, building and maintaining authentic relationships with people of different backgrounds.”

After attending Binghamton University, Rothstein was ordained at Yeshiva University. Identifying as Modern Orthodox, he is rabbi in residence at the environmental group Hazon, and at Bechol Lashon, which promotes Jewish diversity.

He was a founding member of the Beis Community in Washington Heights, and the Union Street Sanctuary, both of which have the slogan “All. Are Welcome. Always.”

Beis Community is a progressive Orthodox synagogue, while Union Street is more of a social organization with mostly a millennial crowd. While a majority of those attending Union Street are Orthodox, Rothstein’s goal was to have an inclusive place for all, regardless of their background or anything that could make them feel like an outsider.

When he joined JFNA this summer, he said Jews of color in the American Jewish community is not a new phenomenon. “Mixed-race families today struggle to find their place in the broader Jewish community, and so much of what I see as my job is how do we collaborate and create a sense of a movement we’re all a part of.”

In Birmingham, he visited the civil rights sites, along with some of the local Jewish institutions, and spoke before an online panel on “Race, Justice, Healing and Unity: An Interfaith Discussion,” coordinated by the Levite Jewish Community Center and the Jewish Community Relations Council.

To honor his cousin, he went to 16th Street Baptist Church, where he felt “sent by my ancestors.” He noted that “as an Orthodox Jew I haven’t been in many churches, and I felt at home.”

He also visited the lynching memorial in Montgomery, where he found one of the slabs that mentioned a McGruder.

He also met with relatives and toured family sites in Eutaw, Wedgeworth and Sawyerville.

In a visit to a family cemetery, Rothstein spoke of how humans start from the earth and return, with the question of “what are you going to do in between.”

The cemetery is the great equalizer, as he pointed out nearby graves of members of the Wedgeworth family, “white antagonists” of the Black McGruders in the early 20th century, according to a McGruder family history. “Not even 20 or 30 feet away, those who persecuted, those who expressed racism and bigotry to our family… also wound up in the soil of the earth,” Rothstein said. But from the pain and suffering, “we took those tears and planted a garden” with family members keeping the family land productive.

After the Civil War, Charles McGruder purchased as much land as he could in the area where the family had been enslaved, land which members of the Black McGruders are returning to and are now establishing McGruder Farms and Tribe of Jacob’s Ladder, “focused on community empowerment through regenerative farming, education, and entrepreneurship.”

Marie McGruder said they plan to work with the community at large, because “currently it is one of the most impoverished counties in the state.”

Before his visit, Rothstein said several uncles had told him “you going to Birmingham, it’s for all of us,” and he said he felt his ancestors’ presence throughout the trip.

“I’m really here to honor the different parts of my identity and the legacy of Birmingham,” he said.

The pre-Rosh Hashanah visit to Birmingham “has helped me understand what selichot is all about,” the concept of repentance and forgiveness in Judaism. Through his visit, “my heart is open in ways it hasn’t been, living in New York.”

He was struck by the slogan of Kelly Ingram Park, site of the 1963 civil rights demonstrations, as “a place of revolution and reconciliation.” “To me, it blows my mind,” the idea of reconciliation in today’s polarized America. “Reconciliation is the hardest work ever.”

But “what we do is say ‘there was hardship, there were wrongs’… and the way in which we resolve those wrongs is replacing them with something that is good.”

Today, “we feel everyone is so divided, no one is talking to each other, there is a lot of ‘othering’,” he said. He hopes that his family story of multiple ancestries, “a story of American love,” can be an example in the fight “for the spirit of America.”

With his visit, he felt a responsibility “not only to my ancestors but also to our generation” to do his part in promoting the celebration of everyone’s common humanity, and the “American promise that is beyond race” as King envisioned.

Birmingham is a “shining light” for learning the lessons of the past and moving forward with a common bond, he said. “America needs Birmingham, needs its story.”