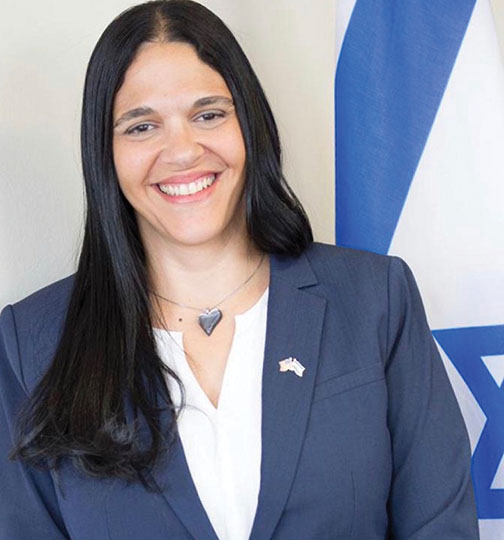 Anat Sultan-Dadon, like many second-generation offspring of those who have been successful, went into the family business. Growing up, it was a natural fit and, looking back, now that she has entered a new phase of her career, an excellent decision.

Only the family business she went into is different than most. It’s not a business or professional practice in the conventional sense, though it is a business crucially important to the well-being of Israel and the Jewish people. Sultan-Dadon chose to follow in her father’s footsteps and entered the Israeli diplomatic corps. Her father, a well-known Israeli diplomat, rose through the ranks to become Israel’s ambassador to Egypt, Turkey and Canada, three highly-important assignments.

During his ambassadorships, Sultan-Dadon was no longer living under her dad’s roof — she had begun her own independent life as a young adult. Yet before that, growing up as a diplomat’s daughter, she experienced foreign service life first-hand through his previous postings. His career framed her upbringing. She was born in The Hague, and grew up in the Netherlands, Kenya, Egypt during one of her dad’s pre-ambassador postings and Italy. “And, of course, Israel!” she adds with an evident love for her own country.

Today, Sultan-Dadon is Israel’s Consul General to the Southeast United States at the Consulate which is based in Atlanta. This is a prestigious assignment for her; rich with opportunities and challenges, particularly during this Covid pandemic era.

“I always was very interested in what my father did. I was fascinated,” she recalled in a recent FaceTime conversation. However, she knew following his path would not be easy. “I wanted a family. But I knew that for a woman to marry and drag her husband and children around the world would be a challenge. Serving in the foreign service is a career that involves the entire family. You cannot pursue it on your own.” She credits her husband, who can do his work from anywhere, with helping to make it happen. “Thanks to the support of my husband, I am able to have this career.”

Sultan-Dadon began her diplomatic career in 2004. She has served in Cameroon, Germany, the Netherlands and Australia. She also has held positions in the Euroasia Division and the Asia-Pacific Division at the Ministry of Foreign Affairs in Jerusalem. Today, she is 17 months into what typically is a four-year stint as Consul General to the Southeast — and Covid or not, this dynamic and engaging diplomat intends to make the most of the experience, both for her and her family.

Being an Israeli Consul General is often multi-faceted work. When one is stationed in regions with large Jewish populations, such as Atlanta, as well as vibrant smaller Jewish communities, such as those found throughout the Southeast, the work goes beyond what the typical international diplomat does. In these postings, Israeli Consul Generals not only carry all of the conventional diplomatic responsibilities, they also become an ambassador to — and often part of — the regional Jewish community.

Sultan-Dadon and her family quickly took to their new surroundings upon arriving in Atlanta in July 2019. She had always heard about Southern hospitality and quickly saw it was for real. She remains deeply touched by the warmth with which the Atlanta Jewish community embraced her and her family, and also by the welcome the larger Atlanta community extended to them.

“Our family is very happy to be here,” says the Consul General. She, her husband and their three girls — ages 16, 13 and 10 — arrived about nine months before the Covid pandemic erupted, so they got to enjoy Atlanta, get to know their new city and meet people.

In addition, Sultan-Dadon’s youngest is a special needs child, so before considering the Atlanta posting, she researched what kind of schools and support system would be available. She came away impressed and has been highly pleased.

Over the years, the Consulate has played an important role in developing support for Israel throughout the Southeast, and helping the multi-state region become one of the most pro-Israel areas of the country. Many elected officials in the Southeast, at every level of government, support Israel, and the Consulate has been able to work with all levels of government to deepen ties between the region and Israel. In addition to the political arena, the Consulate also focuses on the cultural, educational and economic spheres, always looking for opportunities to connect people more deeply with Israel.

Sultan-Dadon and her Consulate staff cover a broad swath of Southern states. The Atlanta/Southeast posting is considered an important one for a range of reasons. The South is seen today as a politically influential area nationally, and many other countries also maintain Consulates in Atlanta, which gives the Israeli Consul General a great opportunity to build relationships. The Southeast also has a high concentration of two constituencies that Israel believes are especially important to engage: Evangelical Christians and African-Americans.

When asked about the possibility of reintegrating Alabama and Mississippi back into the region, Sultan-Dadon says that she hopes this may be realized in the future. Reaching out to Alabama’s and Mississippi’s Jewish communities would be especially important to her. “Local Jewish communities and the Consulate have mutual interests — educating and building support for Israel and especially investing in the younger generation of Jews, many of whom don’t have the strong attachment to Israel that their parents and grandparents did,” she emphasizes.

In the relatively short time that she has been Consul General, Sultan-Dadon has received high marks. One of the region’s long-time Jewish professional leaders says she is among the most impressive Consul Generals he has met. A member of her staff says, “I have worked for quite a few people but have never had a supervisor who has been so visionary yet so practical.” A volunteer leader in the Atlanta community, heavily involved with Israel, raves about her and sees the Consul General as an invaluable and accessible resource.

Arriving in the U.S. with an abundance of energy, lots of experience and a vision for what she would like to achieve, Sultan-Dadon has faced some challenges due to the pandemic. “The current situation contradicts everything diplomacy is about, because the emphasis in diplomacy is on the personal,” she explains. “However, the current situation has created opportunities we would not have had, such as hosting events featuring speakers and audiences without anyone needing to travel.”

When it comes to her favorite part of the job, “love” is the word she uses: “I love talking to people and making new friendships.” This is not just a reflection of her personality. It’s also a framing of her strategy. Through personal relationships, even with those who might not be inclined to agree with her or even support Israel at first, this second generation diplomat believes she can win new friends for the Jewish state. One of her staff members says with admiration, “She can be unapologetic while being diplomatic.”

Sultan-Dadon, clearly an accomplished and confident woman, takes special pride in being Israel’s Consul General in Atlanta. “This is my fifth foreign service posting and my first as head of mission,” she explains with a mixture of humility and pride. “I think it is a great privilege not only to be a Head of Mission, but to do so in the United States, which is Israel’s most important ally.” There are eight Israeli Consulates in the U.S., with the Consulate in Atlanta being the only one headed by a woman, aside from Galit Peleg filling in as interim Consul General in Miami.

As the conversation closes, Sultan-Dadon continues speaking passionately about what she intends to accomplish during her Atlanta tenure. “I love being able to communicate what Israel is about and where we have common interests and common values with others. I think that often people are unfamiliar with what Israel is really about. They may have certain perceptions or images which they have received through traditional media or social media which are not necessarily accurate. Ideally, we would have everyone visit Israel, but our conversations and programming allow us to show what Israel is.”

Ideally, also, would be everyone who cares about Israel having the chance to chat one-on-one with this dynamic and engaging diplomat. She is warm, upbeat, a devoted mom, a thoughtful risk-taker, and a mover and shaker, with much to be proud of and, no doubt, a great career ahead of her.

It seems that in this case, her going into the family business was the right decision — not only for Anat Sultan-Dadon, but for Israel and the Jewish people as well.