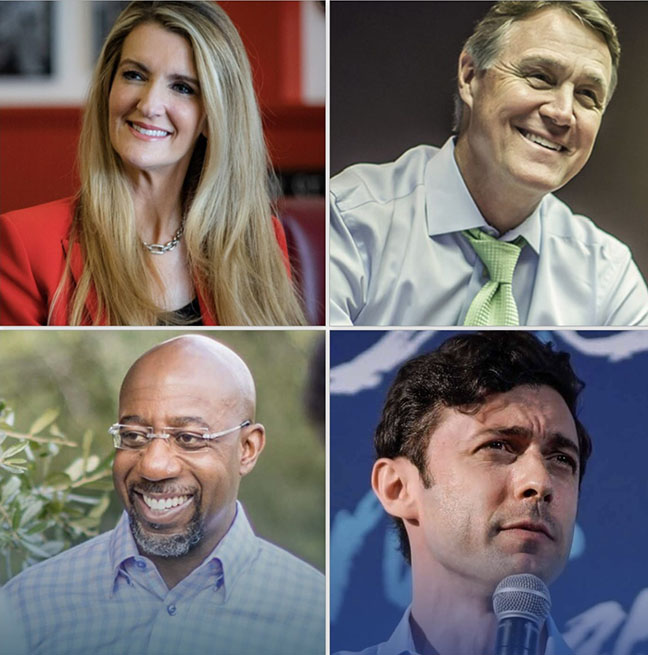 Jewish hearts are heavy in Georgia, where the Jewish community is deeply polarized as two crucially-important U.S. Senate races approach.

That is the picture that emerges from interviews and surveys with community leaders and rank and file members of Georgia’s Jewish electorate, with few of them willing to express their views on the record.

Warnock, who is African-American, is pastor at Atlanta’s Ebenezer Baptist Church, where Dr. Martin Luther King Sr. and Jr. once co-pastored. Ossoff, who is Jewish, is an investigative journalist. Both candidates are considered serious contenders.

The two runoff races, which likely will determine which party controls the US Senate, coupled with the constant media attention, not only have extended a toxic political season for Georgians but have pitted Jews in the state against one another.

Money is pouring in, ads are airing, and efforts to register new voters and to turn out the vote are intensifying. It is hand-to-hand political combat.

“The gloves are off,” says one of Atlanta’s most influential and longstanding Jewish community leaders who, like others, did not want his name used.

One of those willing to speak on the record is Allison Padilla-Goodman, who heads the Atlanta-based Southern office for the non-partisan Anti-Defamation League. “I think nationally Jews tend to lean more toward Democrats. But in Georgia, there is a closer split. As a result, there is a lot of divisiveness.”

Israel, once a unifying issue, has become an emotionally-charged topic in the Jewish community. Donald Trump’s tumultuous four years in office have created additional pressure points and fault lines.

Such divisiveness can take its toll on the institutional infrastructure of a Jewish community. Agency directors begin looking over their shoulders, becoming hesitant to provide leadership on Israel and other issues that have the potential to create political disputes.

The wear and tear that the ongoing political drama and tension is taking on Atlanta’s Jewish community and smaller Jewish communities around the state is draining and divisive, Jewish leaders admit. But they are not doing much about it right now. They are in the heat of battle.

“We have a lot of work to do in our community to make sure that our fellow Jews feel safe and heard and not disrespected, and this is going to be a challenge,” laments one longtime Jewish community leader.

Supporters of the Democratic challengers describe those backing the Republican incumbents in rugged language. And vice-versa.

Who wins will no doubt have important implications. Yet, the acrimony in the Jewish community may be just as significant and more long-lasting.

“The tension and divisiveness in the Jewish community will have long-term effects,” predicts a seasoned Atlanta attorney who has been involved in Jewish community life. “You cannot ‘put the genie back in the bottle’ once you start a culture of demonization and vilification of your political opponents and of refusal to compromise.”

“I don’t believe that many people are open to intellectual discourse,” adds a Jewish leader in Savannah, home to a much smaller though highly active Jewish community.

“People on both sides are mostly falling for the canards they are hearing from friends, family and neighbors,” he says. “Most people in the community are trying to convince other people that they are right and the other person is wrong, as opposed to learning from each other.”

Joanie Shubin, co-chair of Atlanta’s Jewish Women’s Democratic Salon, says, “I honestly don’t have any good friends with different political views.” For her, the election issues have moved beyond public policy into Jewish values.

Unlike other regions of the country where the Jewish vote in presidential elections tends to go roughly 70-30 Democratic, in the Deep South, observers agree, the margin is likely closer to 55-45 Democratic.

There are an estimated 130,000 Jews in Georgia, with the bulk of them living in the Atlanta area. Given that Jews traditionally have a high turnout, the Jewish vote could play a significant role in deciding the two Senate races, which are expected to be close.

One of Atlanta’s most visible Democratic advocates is Michael Rosenzweig, board member of the Jewish Democratic Council of America and a head of the JDCA Georgia chapter.

“Those of us who are Democrats genuinely cannot understand how anyone who cares about the values of the Jewish tradition can possibly support Trump. It’s quite literally unfathomable,” says Rosenzweig. “Anyone supporting Trump is not educable. I mean that literally.”

He was asked whether he believes tension and divisiveness will be short-lived or have long-term effects. “Long term,” he said, “owing to the willingness of Republicans to go so low in embracing political expediency over true concern for Israel’s security by undermining the bipartisan nature of U.S. support for Israel.”

Shubin is frustrated because she also believes support for Israel has become politicized. She bristles at the idea that Democrats are not as supportive of Israel as Republicans. “I am willing to disagree with Republicans on other issues, but I find it disturbing that we have allowed ourselves to become divided over something as important as Israel.”

Chuck Berk, a local chair of the Republican Jewish Coalition, dismisses the idea that Republicans have politicized Israel and made it a wedge issue. “What you have is Trump and the Republicans being so strong in their support for Israel. Democrats need to look in the mirror and ask themselves what they haven’t done to support Israel.”

A commitment to Israel, Berk adds, “is not making statements. It is action. I would love to see the Democratic Party be as strong for Israel as the Trump administration has been.”

Berk acknowledges the political climate in Atlanta’s Jewish community is challenging these days. “With some of my golfing friends, who are more liberal, I can’t even bring up politics. They get so emotional. If I try to express my views then I am one of those ‘deplorables’.”

In late October, the Atlanta Jewish Times hosted a debate between Rosenzweig and Berk. It was animated and substantive as the two went toe-to-toe.

Jews who voted for Trump and support Loeffler and Perdue believe support for Israel by those three and the GOP is stronger than that of Biden, Warnock and Ossoff, and the Democratic Party.

Jewish Republicans point to issues such as GOP support for Israeli dominion over lands acquired in the 1967 war, and the hard line Trump has taken with Iran, including terminating U.S. participation in the Iran nuclear accord which most Jewish Republicans see as flawed.

Warnock, in particular, has come under fire for, among other things, a letter he signed in the past that many feel defamed Israel, though he has since affirmed his strong support for the Jewish state.

Meanwhile, Perdue has been accused of promoting antisemitism through a campaign ad enlarging Ossoff’s nose, a classic negative Jewish stereotype. Loeffler has made some Jews uncomfortable by embracing Marjorie Taylor Greene, a newly-elected Member of Congress from Georgia who is associated with QAnon, a far-right conspiracy theory group that many see as antisemitic.

Dov Wilker, long-time director of the Atlanta office of the non-partisan American Jewish Committee, has met with all four candidates.

He says Loeffler is “very pro-Israel” and has not done anything explicitly to offend the Jewish community. Regarding her association with Greene, Wilker said this should not be interpreted as her supporting conspiracy theories. He sees Loeffler’s relationship with Greene reflecting the Senator’s desire to “connect with an important voice in the electorate.”

Warnock, Wilker says, has made statements that have been anti-Israel. Yet, he adds, Warnock is a friend of the Atlanta Jewish community who has been an ally on the local level and built key friendships with Jews.

Reflecting on Perdue, Wilker says, “I think he’s been very supportive of Israel. He has unfortunately had two instances of what people have seen as antisemitism — a comment he made a number of years ago and the Ossoff nose ad. “We talked about the ad. He understands why it was wrong.”

Of Ossoff, Wilker says “it is easy” for Jews to vote for Ossoff, given that he is Jewish, proud of being Jewish and talks openly about his commitment to his Jewish identity.

Still, the beat goes on — and will likely continue to do so up to Jan. 5 and even beyond.

“The runoffs are causing horrible tension,” observes a retired physician, a member of one of the state’s smaller Jewish communities. He voted for Biden yet plans to vote for Perdue and Loeffler.

“Three things got me to vote for Biden,” he explains. “When many respected generals said Trump was not capable of making appropriate decisions because he really didn’t care about their opinion, I was concerned. Number two is when Trump walked out of the White House with the Bible and took it to the church. I found that act repulsive in trying to use G-d as if Trump was a G-d fearing person. Number three was Trump’s opposition to Dr. Anthony Fauci’s Covid opinions and his total denial of any scientific data.”

However, he added, “I will vote for the Republicans in the runoff. I love a divided Congress. Gridlock will be good and may lead to forcing Congress to compromise.”

The thought process of one of Atlanta’s most respected Jewish leaders also reflects anxiety and introspection.

“I am enthusiastically pro-choice and support gay marriage, the Democratic position, but find the Republican platform regarding the direction of our country more responsible, more Constitutional and more realistic,” he explains.

“If far-left progressives and Black Lives Matter don’t get their way as Biden creates policy and makes appointments, I fear another explosion in the cities and beyond. It will not be so easily contained as evidenced by the past inaction of many mayors and governors,” he adds.

“Truth be told, I am one of 6 million new gun buyers this year who fear what might be coming if there is an ascendant left, a diminished police presence and a cowardly administration.”

“It is amazing how much this has galvanized people and captured their attention. Friends not politically involved got fired up over the presidential election and have maintained that enthusiasm,” says Wilker.

“It is exciting that Georgia is the center of the political universe right now. It gives our state the chance to showcase itself. Everybody knows that everybody is looking at us.”

One of those who wants to be optimistic about the impact of the extended election season on Georgia’s Jewish community is ADL’s Padilla-Goodman. “While the election issues are intense, I don’t think they will fracture the Jewish community in the long-term. The community continues to be an incredibly unified force,” she believes.

Though after pausing for a moment, she admits, “I’m probably being a little utopian.”