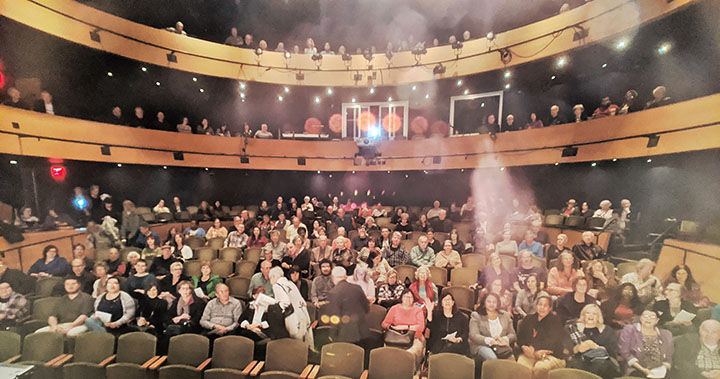 Photo from the January 2020 festival in Baton Rouge. No in-person screenings will be held for the 2021 festival.

The Baton Rouge Jewish Film Festival is going virtual this year, with a series of online offerings.

The festival, now in its 15th year, normally takes place in January at the Manship Theatre. The festival website has trailers to all of this year’s films, along with information on how to view them at home, and participate in live question and answer sessions with film directors.

A festival pass is $42, while single films are $14. After the films are made available at 6 p.m. on the day of release, there is a 72-hour window to purchase the film, and when one starts to view a film, it must be completed within 24 hours.

“Breaking Bread” is a documentary about Nof Aramna-Ismaeel, the first Muslim Arab to win Israel’s MasterChef. She is on a quest to make social change through food, founding the A-Sham Arabic Food Festival, where pairs of Arab and Jewish chefs collaborate on dishes like kishek, a Syrian yogurt soup, and qatayef, a dessert typically eaten during Ramadan. The film is available starting Jan. 10 at 6 p.m.

On Jan. 11, “They Ain’t Ready For Me” will be available. The film tells the story of Tamar Manasseh, an African-American rabbinical student who is combating gun violence on the South Side of Chicago with magnetic, self-assured energy through her organization MASK, or Mothers Against Senseless Killings. “They Ain’t Ready for Me” explores the complex identity and motivations of an extraordinary person who is Jewish and black, and how these intersecting identities offer her a road map for addressing one of America’s most urgent crises.

Legendary neurologist and storyteller Oliver Sacks is the subject of the Jan. 13 documentary, as he shares intimate details of his battles with drug addiction, homophobia, and a medical establishment that accepted his work only decades after the fact. The author of “Awakenings” and “The Man Who Mistook His Wife for a Hat,” Sacks changed how the brain and mind are understood. Much of the film comes from exclusive interviews just weeks after he received a terminal diagnosis, a few months before his death in 2015.

The festival offerings conclude on Jan. 14 with “Mossad,” an “Airplane!”-style Israeli box-office smash that features the creative support of legendary film-makers David Zucker and Avi Nesher. The film is a riotous sendup of the Mossad, Israel’s revered national intelligence agency. When an American billionaire is kidnapped in Israel, operative Guy Moran teams up with the CIA’s best agent to try and save the day. Tsahi Halevi from “Fauda” stars.

There are several free live question and answer sessions, which will also be available for on-demand viewing afterwards. On Jan. 13 at 8 p.m., there will be a program with “Breaking Bread” director Beth Elise Hawk. Tamar Menasseh and “They Ain’t ready For Me” director Brad Rothschild will speak on Jan. 14 at 8 p.m., and on Jan. 16 at 8 p.m., “Oliver Sacks: His Own Life” producer Bonnie Lafave, director Ric Burns and executive director Kate Edgar of the Oliver Sacks Foundation will speak.

There are also a few free short films available.

“Fault” is a free 8-minute short film about friendship by Brooklyn-based writer-director Eric Goldberg. “Fault” follows four lifelong friends as they struggle to maintain the routine of their weekly tennis match despite past grudges, fresh injuries, bad serves, and death. After unlocking the film, it is to be started within 72 hours, and one has 24 hours to complete it after starting to view.

“Ma’agalim” is a four-minute Hebrew music video by the Jane Bordeaux Band, a Tel Aviv-based band that makes American folk-country style music in Hebrew. The video has gone viral worldwide for its animation, as it is set in an old penny arcade where a wooden doll is stuck in place while the world changes and passes by.

“Travelogue Tel Aviv” is about an art student from Switzerland who embarks on a journey of self-discovery through six months of drawing in Tel Aviv. Told with a scrapbook style, director Samuel Patthey juxtaposes drawings of the secular and Orthodox. Traditional religious architecture bumps up against the city’s raucous nightlife. The sounds of air raid sirens blend into EDM before transforming into random city sounds.