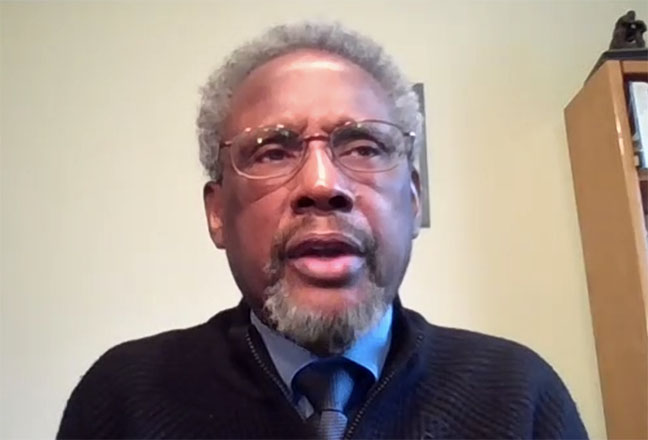 The multi-locale virtual Civil and Human Rights Mission, sponsored by the Goldring Family Foundation Center for Jewish-Muticultural Affairs, a program of the Jewish Federation of Greater New Orleans, reached back to lessons from the modern American Civil Rights Movement and the Holocaust to frame contemporary issues, such as challenges and bigotry facing the LGBTQ+ community, immigrants and the Muslim Uyghur community in China.

This initiative, done virtually this year due to Covid and in lieu of an annual visit to Alabama that Jewish and African-American students make each year to learn more about the Civil Rights movement, turned a problem into an opportunity by engaging a broadened array of speakers that could only be assembled through an online Zoom program.

In addition to those speakers who focused on racism, the lessons of the American Civil Rights movement, antisemitism and the lessons of Jewish powerlessness during the Holocaust, other speakers dealt with human rights in general.

“We hope you will gain an understanding of the consequences of hate and the tools that can be used to build a more just world,” said Federation CEO Arnie Fielkow, as he welcomed participants and set the backdrop for the program. He said that the gathering this year, since it was virtual, could provide a broader approach, and focus on other instances of groups facing identify challenges “based on bigotry, discrimination and violence.”

The program was constructed around the Center’s four “outreach areas,” African-American, multi-faith, Latin-American and LGBTQ. While it was constructed for middle and high school students, adults were invited to participate as well.

Two of the speakers dealt with Jewish challenges — including antisemitism and Israel. One was U.S. Rep. Elaine Luria of Virginia, a Democratic congresswoman just elected to her second term, who is Jewish and who grew up in Birmingham. The other was David Harris, long-time CEO of the American Jewish Committee, an important national organization.

Said Luria, “One can’t legislate away hate… I think our job (as Members of Congress) is to do our best to create an environment where people can succeed where there is equality and equity.” Her prior background was in the military and she offered some observations from that experience. “There are times the military has led on issues…but there is much that needs to be done.”

In 2019, as a new Member of Congress, Luria spoke out against antisemitism as a leader in the response to comments by fellow freshman Ilhan Omar challenging the loyalty of Jewish Americans, a classic antisemitic canard. “I found it very surprising that the first time I spoke on the floor of the House was against antisemitism and claims of dual loyalty.”

Taking questions from the Zoom group, which contained many students, Luria was asked how young people could become involved in public service. She encouraged them to look for opportunities to become engaged in causes they care about, even in small ways, such as volunteering to assist food banks during the Covid crisis.

She said those kinds of activities are one avenue, along with opportunities to become involved in assisting non-profit organizations or religious groups. She recalled that, “I went down the path of service at an early age, attending the U.S. Naval Academy” — which resulted in a distinguished military career and her election to Congress.

Luria said there are other ways to serve the public good, such as entering the medical profession or becoming a teacher. “Pursue your passions, be good at it… and show up — opportunities will open,” she said.

Harris spoke about his own experiences as a student in the 1970s, which led to two awakenings. An opportunity to teach in the Soviet Union acquainted him first-hand with the oppression and antisemitism Jews were facing from the Soviet regime. Then in 1973, the Yom Kippur War, in which Israel was attacked and almost destroyed by Arab forces, awakened him to Israel’s vulnerability and the hatred that the country’s enemies had for the Jewish state.

Both were formative experiences which led to Harris’ desire to dedicate his life to what he calls “Jewish diplomacy” — and he has done that through becoming one of the most highly visible and effective leaders in the Jewish world through his work at the American Jewish Committee.

He also told his viewers that he is deeply worried about the resurgence in antisemitism, which is occurring not just in the U.S. but also in Europe and other parts of the world. Antisemitism is hostility and hatred toward Jews and combating it is a top priority of Harris’ organization. “There is no single answer for the resurgence of antisemitism… it has been called the world’s oldest social pathology.”

Antisemitism, Harris said, has existed for thousands of years. He said throughout history it has manifested itself religiously, racially, politically, culturally and economically — “all kinds of manifestations.” He noted horrid chapters of expulsions, forced conversions, ghettoes, inquisitions, Jews relegated to second or third class status, and discriminatory laws. It’s the cumulative weight of these behaviors, that began what he called the “slippery slope” that led to the Holocaust.

“The world is always looking for easy explanations to difficult issues,” he said, and finding scapegoats — Jews and at times others — makes dealing with stressful times easier, rather than societies having to confront the reality of their situations.

The second issue, he said, “is what some call envy or jealousy.” When Jews have been given a fair chance, they have tended to be successful. They embrace such chances, work hard and value education, he said. Others, who have not been able to achieve that level of success, fail to examine their own failings and instead develop resentment toward Jews.

The third factor, which is a new phenomenon, is the Internet. “Any antisemite can create a website, a message of hate of any kind, of racism of any kind… and eventually have a worldwide audience,” lamented Harris. “The Internet has become a launching pad for worldwide dissemination of antisemitism.”

The fourth point is what he called the “misunderstanding/demonization” of Israel which, he noted, is the only Jewish-majority country in the world. He said that it is okay to criticize Israel for its policy decisions, but that such criticism becomes antisemitism when people of ill will attack “the right of a nation to exist or a peoples’ right to self determination… when it is an effort to dismantle the state, something else is usually going on.”

Finally, Harris stressed that “antisemitism should never be seen as a Jewish issue… of course, Jews are more focused on it for very personal reasons, but when antisemitism rears its head, be assured it is a threat to liberal democracy… because it is a challenge to the core values of our society.”

One of the other presentations likely resonated with those who live in the Deep South, where the Civil Rights saga and issues stemming from the movement still influence day to day life. Spencer R. Crew, interim director of the Smithsonian Institution’s National Museum of African-American History and Culture, gave a powerful analysis of the “Children’s Crusade,” a turning point in the Civil Rights demonstrations that took place in Birmingham in 1963. He illustrated the impact that young people can have when it comes to creating social change. Had it not been for younger African-Americans in Birmingham having the courage to mobilize and even face being jailed during those turbulent times, the Civil Rights demonstrations in Birmingham might not have had the impact that they did.

“It’s very important for you as students to recognize the impact you can have as young people in causing change.” he emphasized.

A powerful presentation was made by Dr. Timothy McCarthy, Carr Center for Human Rights Policy, Harvard University. His topic was “Does Hate Trump Love?: A Short(ish) History of Queer Struggle.” He traced the hate and challenges that gay people have faced over the decades, framing his talk within an overall human rights message.

He said President Barack Obama will “likely go down as the Lyndon Johnson of the LGBT movement” because of the changes that occurred under his presidency. But, “progress can be turned back, every time there is an advance… there are forces of reaction in response, waiting in the wings to push it back.” The Pulse Nightclub massacre is “one of those indications… we still have far more to go.”

Also on the program was Omer Kanat, Uyghur Human Rights Project, to discuss Xinjiang, China, and the modern-day anti-Muslim hate being perpetrated against the Uyghurs.

He stated that China is working to culturally erase Uyghurs and turn the Muslims into Chinese citizens who are concerned only for the state. Children may not be given Muslim names, over one-third of the region’s mosques have been destroyed in the last four years and native Chinese are placed in Muslim homes in a “becoming family” initiative that also monitors them to be sure Muslim prayers are not being uttered.

Hundreds of thousands of Uyghurs were also forced to the cotton fields in the last two years, to pick cotton by hand as forced laborers.

“We are a very small community and we need the help of others to fight this genocide,” Kanat said.

The concluding speaker was Samantha Power, who served as President Obama’s ambassador to the United Nations and is a widely-known academic and author. “My feeling these days is of being small — that there are big problems out there… and we don’t think anything we do to make change is enough,” she said. “What can one little person do?” she asked in view of the enormity of the problems, as her question turned into a challenge to the group.

She alluded to a concept called “shrinking the change,” which comes from a book she read entitled, “Switch: How to Change Things When Change Is Hard.” In the book, she said the authors basically stress “not letting the big challenge and small solution get you down. Set your sights on something more modest… that can be achieved — that is within your power. Impact is fuel.”

Speaking to the students on the call, Power stressed, “There is always something we can do,” though acknowledging that “the changes we can make as mortals are small, but they can make big changes in someone’s life.”