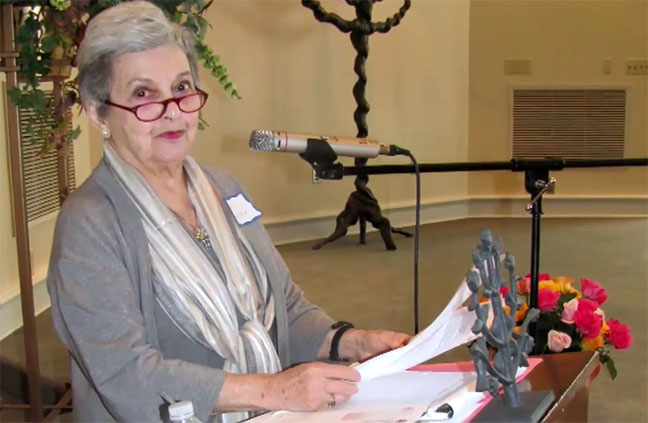 Two days later, just after midnight on the morning of Jan. 6, she passed peacefully in her sleep.

Known most recently as the founder of the Birmingham Holocaust Education Center, Weinstein was involved in the formation of many local Jewish institutions over decades of service to the community.

The BHEC issued a statement saying Weinstein “devoted her life to community service, and she leaves a lasting legacy of wise and forward-thinking leadership in our city and state. She was not only a force to be reckoned with, but was a kind and thoughtful friend and mentor to many, many individuals in our community.”

Richard Friedman, who directed the Birmingham Jewish Federation from the 1980s to 2019, said Weinstein “was one of the most extraordinary people I have met.” Referring to her as “the Golda Meir of the Birmingham Jewish community,” he said she “was a great and remarkable person, dogged and determined, passionate and persistent.… She will be missed and remembered for decades to come.”

Lisa Engel, president of the BJF, said “We are a stronger and more vibrant community because of Phyllis’ passion for Jewish life.” 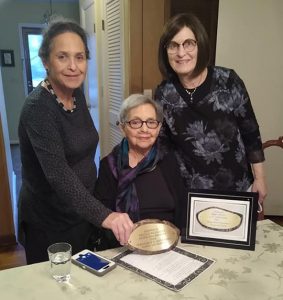 Phyllis Weinstein with daughters Lynn Raviv and Janie Feldman, during a presentation of a Temple Beth-El Tree of Life foundation stone in Weinstein’s honor on Jan. 4, her 100th birthday.

On Weinstein’s 100th birthday, Temple Beth-El Sisterhood Coordinators Sue Lischkoff and Arlene Fisher visited with her to present a dedication stone in her honor for the congregation’s Tree of Life. After her passing, they said “while we are sad that we will no longer hear her pearls of wisdom and benefit from her leadership, her impact on our Sisterhood, Temple Beth-El, the Jewish community and beyond, will be felt for many, many years.”

Sally Friedman, executive director of the Birmingham Jewish Foundation, said “Phyllis was a towering figure in our community and no one has ever led by example more than Phyllis. Wherever you look in our community you can see her fingerprints.”

Weinstein was born in Evansville, Ind., to Jennye and Sam Grusin. Sam Grusin immigrated to the U.S. in 1906, getting his start in Jasper, before moving to Indiana in 1917. Phyllis attended the University of Alabama, where she renewed her acquaintance with Birmingham native Leon Weinstein, who she had met previously in Evansville.

They married in 1940, then his dental practice was put on hold as he enlisted and served in the 99th Infantry Division. After the war, they settled permanently in Birmingham, and she quickly became involved with numerous community organizations.

Weinstein said her involvement with Hadassah came from “osmosis,” as her father was part of the early Zionists in Birmingham. She was also very active with the Temple Beth-El Sisterhood, becoming president.

While attending Southeast Branch conferences, she felt that Alabama, Tennessee, South Carolina and Georgia were being overwhelmed by the Miami area, so she embarked on a push to have Women’s League separate those states into a different region. She became the first president of the Southern Branch, and in 1975 the region established the Phyllis Grusin Weinstein Leadership Award.

Around then, Yankee Marcus, former Hadassah Birmingham president, asked to come over to chat. She instead showed up with a delegation of 30 to ask Weinstein to be chapter president, which she was reluctant to do because of her new Sisterhood commitment. She finally agreed, but only if she could serve one year instead of two.

During her year, in an effort started by predecessor Roselyn Cohen, the Hadassah Directory as it is known today evolved from the fundraising program books that accompanied plays the chapter had put on.

In 1959, she was the first woman from Birmingham to go on a United Jewish Appeal Women’s Mission to Israel. She later chaired the local UJA Women’s Division and Israel Bonds, and served as Federation president.

In 1973, she was one of the founders of the Birmingham Jewish Day School, now known as the N.E. Miles Jewish Day School, and served for four years as president. Until this year, Weinstein had a tradition of bringing doughnuts for the students on the first day of school.

She also served as chair of the Emergency Food and Shelter Program of FEMA for Jefferson, Shelby and Walker counties, administered through the United Way of Central Alabama, for 17 years.

Weinstein was involved in Holocaust education since its beginnings in the state, starting with the annual state commemoration first held by Governor George Wallace in 1984. After attending a regional gathering a few years later and seeing how much more some other states were doing, she pushed for the establishment of a state Holocaust commission. After it failed to pass the first year, she was advised that it would have a better chance the next year if there wasn’t a funding request attached, and in 1999 the Alabama Holocaust Commission was established. Weinstein would be the commission’s chair for a decade.

Her successor, Dan Puckett, spoke of her “dedication and commitment to social justice and education.”

Calling her “a tireless advocate for Holocaust education” whose efforts will be felt for generations to come, he said one of his most vivid memories “was when she confronted Governor Bentley at the Yom HaShoah Commemoration about the lack of state support for Holocaust education. We were funded by his office the following year.”

While Weinstein’s paternal grandparents came to the United States in 1914 with one daughter, another daughter — who wound up having seven children — stayed in Europe, and much of the family was lost in the Holocaust.

In 2012, Weinstein was honored by BHEC on its 10th anniversary. She stepped down as president in 2016.

She is survived by her sister, Judy Rattner of Knoxville, two daughters, Janie Feldman, of Atlanta and Lynn Raviv (Arie), of Birmingham, seven grandchildren and 19 great grandchildren, and a number of nieces and nephews.