From “This Is Your Life”

Though dramatically different in substance, separate online Holocaust programs in Louisiana on Jan. 10 highlighted the importance of remembrance and resilience as two organizations recounted and reflected on vastly different Holocaust-era lives.

The programs featured the adult children of the main figures in each story, who talked about their parents’ sagas and the implications of their inspirational stories for today.

The North Louisiana Jewish Federation featured Julie Kohner. In 1953, her mother, Hanna Kohner, was the first non-celebrity highlighted on “This Is Your Life,” the famous Ralph Edwards television show. In addition, Hanna’s moving and harrowing story of surviving the Holocaust was a first for television. At that time, the catastrophe that befell European’s Jews was not widely depicted in popular culture.

Nonetheless, the Edwards show looked at Hanna’s tortuous journey honestly, and, as part of its format, surprised her with guest appearances from friends and family. These include some who she had not seen for a long time, including her brother who was living in Israel. The 30 minute show can be viewed here.

The New Orleans-based Museum of the Southern Jewish Experience featured an online program on mid-1930s Tulane University track star Herman Neugass. His son, Richard, in a talk entitled “A Southern Jew Boycotts Hitler’s Olympics,” told his father’s story. Richard recounted the decision his father made to turn down an anticipated invitation to try out for the 1936 Olympics.

The Games were held that year in Germany, where Adolf Hitler and his Nazis already had ascended to power; oppressive discriminatory laws were being instituted against Jews and the seeds of the Holocaust were being planted. It was clear that the Nazis planned to use the 1936 Olympics as a propaganda platform.

In introductory words that could have applied to both online programs, Rabbi Feivel Rubinstein, program director for the North Louisiana Jewish Federation, said, “I am very excited for our community to have this opportunity. As fewer and fewer survivors are left in the world, every generation has a renewed obligation to carry on their stories.” The Federation program included students and adults.

Julie Kohner has dedicated much of her adult life to educating a broad array of audiences about the Holocaust, using the “This Is Your Life” show and an autobiography her parents later wrote as a framework for recounting the Nazi horrors. She does this through “Voices of the Generation,” a non-profit organization she started to help keep the story of the Holocaust alive.

In 2016, Southern Jewish Life did this story detailing Hanna’s Holocaust ordeal, survival and emigration to America where she built a new life. Hanna, born in 1919 in Czechoslovakia, survived four Nazi concentration camps, including Auschwitz.

As she traced her parents’ story, Kohner said, “My parents taught me that I have to stand up for my beliefs so that what happened to them in the Holocaust will never happen again.” Then she fielded questions.

One questioner noted that antisemitism, Holocaust denial and extremist violence are rising in the United States and asked her to speculate on what her mother might say if she were alive today. Answered Kohner, “I am sure she would be very distraught about it. It is really important for our young people to stand up and not stand idly by; that was a cause of what happened during World War II — people standing idly by and not taking a stand.”

The program took place just a few days after a violent mob stormed the U.S. Capitol. With that in mind, a questioner asked, “If your mother was alive today, how do you think she would have reacted to the violent mob invasion of the U.S. Capitol, especially given the overt antisemitism manifested by some of the insurrectionists?”

“I can only say that I am glad she wasn’t here. It was surreal. It was just horrible. I think it would have taken her back to a time she lived in,” said Kohner. She believes it would have rekindled for her mother a sense of the invasion of Czechoslovakia by the Nazis, something her mother lived through. “It would have reminded her of a time when she wouldn’t have been safe.”

The program on Neugass recounted the powerful saga of a young Jewish man on the brink of possibly becoming known throughout the world for his athletic ability, yet who chose to put principles and loyalty to his faith first. The program can be viewed here. 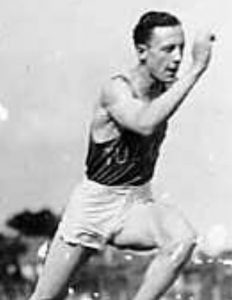 His son, speaking coincidentally on what would have been his dad’s 106th birthday, used a slide show to tell the story.

“Dad refused to participate in the U.S. Olympic trials, held in Flushing Meadows, NY. He was a significant candidate, and would have been invited to those trials, had he not told the U.S. Olympic Committee that he would not go if the Games were held in Germany,” said his son.

The slides included highlighted excerpts from his father’s letter to the U.S. Olympic Committee.

“I, personally, would not have participated in such games in any country in which the fundamental principle of religious liberty is violated as flagrantly and inhumanely as it has been in Germany,” read one of the excerpts. “I feel it to be my duty to express my unequivocal opinion that this country should not participate in the Olympic contests, if they are held in Germany” read the other.

“He could have been on the world stage,” said his son, “but he quietly made the decision that this is something he could not do.” His principled position did not remain quiet. His letter appeared in the New Orleans Times Picayune and his story was picked up by the New York Times.

Once his decision became widely known, Herman received letters both supporting his decision and objecting to it. The reaction was complicated by the fact that “the Jews in the South didn’t want to make waves; they didn’t want consequences,” his son said. Herman, born in Mississippi and raised in New Orleans, was just 20 at the time.

Herman’s story was largely forgotten until 1980 — the year President Jimmy Carter decided that the U.S. would boycott the Moscow Olympics as a response to the Soviet invasion of Afghanistan. There was debate over Carter’s decision which “reinvigorated dad’s story,” his son explained.

His son was asked what impact his father’s story has had on his own life. He said he learned that “principle and personal integrity are the most important things in life… I also learned that keeping quiet at critical times is not always the best strategy — there is a time to speak out.”

Despite Herman Neugass’ principled rejection of the antisemitism of the Nazi regime, he encountered American antisemitism shortly thereafter. “When he graduated from Tulane, he got married, and moved to Washington because of discrimination against Jews,” explained his son.

“My father was a math whiz and was asked to join an actuarial firm in New Orleans. They didn’t know he was Jewish, but when they found out, they said to him, ‘We would love to have you working in our firm, but we can’t put you in the partner track because the actuarial society in the United States does not allow Jews’.”

With that, Neugass left New Orleans and moved to Washington, where he joined his wife’s family business.