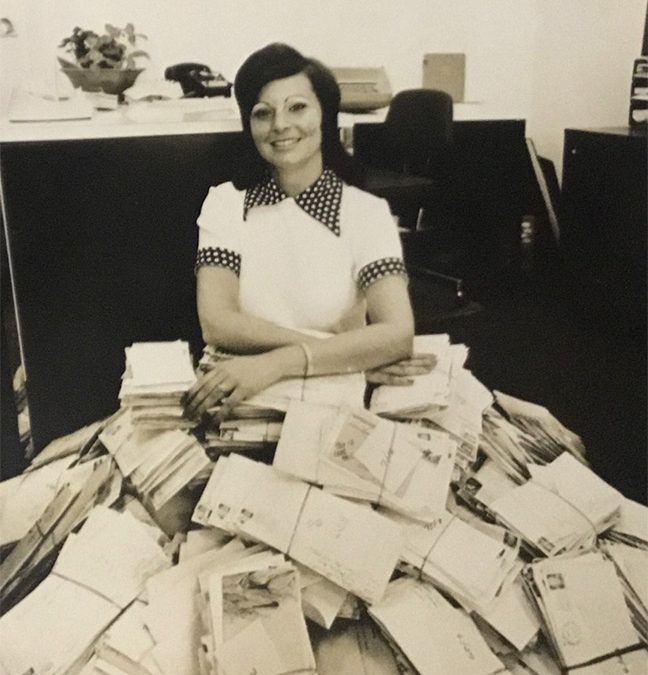 Her daughter’s Uncle Henry died.  There’s no other way to explain it when you talk to Carla Koplin Cohn, a Jewish woman who grew up in Macon, Georgia, who wound up at the crossroads of baseball — and American — history.

In the early 1970s, Cohn was baseball legend Henry Aaron’s personal secretary as “Hammerin’ Hank” of Atlanta Braves fame waged his successful assault on what was then one of baseball’s most cherished records.

It sounds like a dream job for a young woman who started in the Braves’ organization in 1969, and though it was full of twists and turns — and the creation of a friendship she never could have imagined — it was a nightmare of an assignment at times.

It was her job to help manage the hate mail that came pouring in from throughout the country and especially the South, as more and more Americans realized that Aaron, a Black man, was on the verge of breaking American icon Babe Ruth’s all-time career record for home runs — 714.

Which he did in 1974, ultimately finishing his career with 755 home runs.

Aaron chasing Ruth’s record was one of the most dramatic and intense sports sagas of all time, reflecting the good, the bad and the ugly.  Americans of every race, religion and ethnic background cheered on Aaron, while the country’s bigoted underbelly stepped forward as well, with these hate-driven folks doing everything they could to make the slugger’s life miserable, including threatening his life.

And standing arm in arm with the internationally-known ballplayer and helping navigate the pressure he was facing, was Cohn, who had impressed Aaron so much with her work in the Braves organization that he recruited her to be his personal secretary.

Among other things, she helped him manage and respond to the nearly 1 million letters he received as he approached and surpassed Ruth’s record, turning the more hateful ones over to the FBI.

As Slate.com noted in a profile on Cohn in connection with Aaron’s death, “The 900,000 letters Aaron received in 1973 contained hundreds upon hundreds of racist attacks and death threats. Aaron ended the ’73 season one short of Ruth’s sacred 714 mark, and spent the winter worried he’d be assassinated before 1974’s opening day.”

Cohn became so close to Aaron and his family that their friendship wound up enduring for nearly 50 years, up until his death on Jan. 22 at the age of 86. They had recently talked and made plans for their families to get together in Florida once they were all vaccinated for Covid.

Though saddened by the personal loss, which was unexpected, Cohn told Southern Jewish Life about the challenges and the good times she and the Hall of Fame superstar shared in the early 1970s as he broke the legendary Ruth’s home run record, once thought of as unbreakable.

There was one story in particular that brought delight to Aaron, Cohn and both of their families. “He even told it at my daughter’s wedding,” she remembered with a smile.

When her daughter Jen was in grade school, she came across a book about Aaron that had his picture on the cover. “I want to read the book about Uncle Henry,” the young white Jewish girl told her teacher, referring to the African-American home run king.

It was an awkward moment that led the teacher to call Cohn to come to school so they could discuss her daughter’s comment — and seeming confusion — in person.  “Jen thinks that Hank Aaron is her uncle,” the perplexed teacher explained to Jen’s mom.

“Well, he is!” Cohn answered, telling the teacher about the unique relationship between the two families. Adds Cohn, “When I first told Henry about it, he laughed until he was crying.  He told that story so many times.”

The Uncle Henry story, Cohn said, reflected who this remarkable man was. “He loved people for who they were.  Skin color didn’t matter, religion didn’t matter — he was an open and loving man who welcomed us into his family for nearly 50 years.”

It was his belief in the goodness of people that led the Anti-Defamation League in Atlanta to honor Aaron for his good works and community leadership as he was approaching Ruth’s record, an event that Cohn and her family attended.  She still has the program from the evening, a keepsake she treasures with pride.

“Henry had lots of Jewish connections and friends in Atlanta and he was more than happy to help the Jewish community with various causes, but he also helped other communities as well.”

Referred to widely as Hank or by his nickname “Hammerin’ Hank,” Aaron was known to his inner circle, including Cohn, as Henry, the name he preferred.

What led to the acclaimed baseball superstar and young Jewish secretary from Macon connecting so deeply?  Cohn pondered that, reflecting on her years of working for Aaron and the decades of friendship since then between their two families.

Aaron grew up in Mobile, Alabama. Cohn grew up in Macon, Georgia.  Part of their connection could have been that they came from similar Deep South cities at roughly the same time, instinctively bonding and understanding each other’s roots and culture.

Since Aaron was African-American and Cohn was Jewish, two groups that have not always had it easy, especially in the South, shared struggles might have further deepened their bond, even subconsciously.

In fact, as Aaron was deluged by racist hate mail as he approached Ruth’s record, Cohn herself received antisemitic hate mail after a news story mentioned that Aaron’s personal secretary was a Jewish woman.

Most of all, though, “our personalities just clicked,” says Cohn.

It is easy to see why.  Even though her life’s journey has taken her from Macon to Atlanta to Milwaukee, when Aaron returned to play for the Brewers, to New York City to Westport, Conn., and now to Boca Raton, she has retained her Southern roots and graciousness.  And as Aaron’s superstar journey unfolded, making him known throughout the world, he still loved to come back to Mobile just to hang out and go out on the water with people he knew while growing up.

Henry Aaron’s magic, Cohn remembers, was not in the 755 home runs he hit and the countless baseball honors he accrued.  It came from something deeper, something arguably more important.

“When he asked you to do something, it was so gentle.  He always said please and thank you — I appreciated that.  I don’t think you could ever talk to anyone who would have anything negative to say about this man.  He was a gift.”