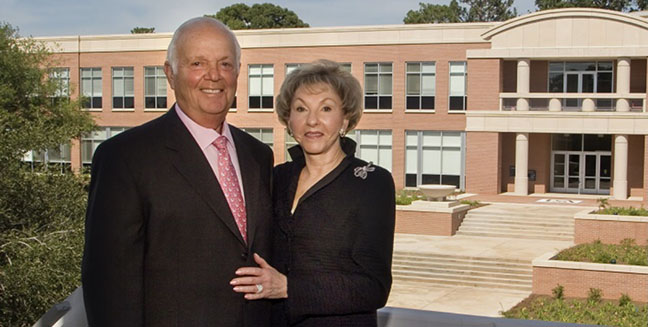 You can hear the admiration in Kelly McCarron’s voice. And the gratitude.

McCarron, associate vice president for medical affairs for University of South Alabama Health Development, is grateful to Bert and the late Fanny Meisler, long-time Mobile residents and benefactors of the University, for a $5 million commitment that leveraged another $4 million in state funding to create the Fanny Meisler Trauma Center at USA.

Explains McCarron, “USA Health is the only academic health system in Mobile, the others are community hospitals and clinics. We are the only system that has a trauma center — what that means is that we have invested our resources into a 24/7 trauma center to help with car wrecks, chemical burns, power line injuries and other severe accidents. We are the place to go.”

Adds the USA official, “A lot of people don’t realize that when you are faced with a trauma it could take about 80 to 100 people to respond throughout the individual’s care — from paramedics to the fire department to the police to other first responders. Then, the patient may have to be airlifted to the hospital. Then once they get there, their case may involve trauma surgeons, nurses, orthopaedic surgeons, nutritionists, therapists — the list goes on and on.”

In short, she said, “It is really a remarkable service — a unique service — and USA’s Fanny Meisler Trauma Center will be the only such facility in the region. We have had the team in place for many years, but our facility is antiquated. It doesn’t match the level of service and care we provide. So, by opening the Fanny Meisler Trauma Center, we are able to increase capacity, and centralize some of the sophisticated technology that is needed, such as imaging. Our new facility already has it all centrally-located, so it is a lot more conducive to patient care.”

The new Trauma Facility will not only deal with major medical traumas. It also will include a state of the art emergency room, to get typical emergency room patients “in and out faster,” says McCarron.

Given that the state has been a significant financial partner, Alabama Gov. Kay Ivey joined the Meisler family at the ribbon-cutting ceremony on Dec. 11.

“The impact of high-quality, highly specialized healthcare as it relates to economic growth in a community, cannot be underestimated,” Ivey said. “The importance is based not only on having a healthy and educated population, but these are items that companies look for when deciding on places to locate their businesses. They also are important for the recruitment and retention of the employees who work in those businesses.”

“By more than doubling the size of the emergency department and trauma center, USA Health is increasing its ability to meet the healthcare needs of the people in our community,” said John V. Marymont, vice president for medical affairs and dean of the College of Medicine. “This new facility is a reflection of the advanced, high quality healthcare that our emergency and trauma healthcare providers deliver to our region.”

Fanny Meisler died in 2016. In 2018, Bert announced the gift to create the Fanny Meisler Trauma Center, explaining at the time “The USA Medical Center serves thousands of people each year and saves the lives of our citizens every day. The expansion of its Level 1 trauma center — the only one of its kind in the region — is vitally important to our community.”

Added Bert, “I am so pleased to be able to give back to the University of South Alabama and to the USA Health system in this way.” In a recent interview he added that Fanny was “proud of their gifts to USA and was very charitable herself.”

The large gift that the Meisler family provided is only the latest in a series of financial gifts, extending back decades, that they have made to USA. The Meislers and other leading Jewish families in the Mobile area have had a dramatic effect on the University, benefiting countless lives, opening up opportunities for students, and expanding health services for people throughout the region and beyond.

McCarron and other top USA officials have enjoyed an excellent relationship with leading families in the Mobile Jewish community, something they don’t take for granted.

“We often talk about how fortunate we are to have the relationship we do with the Jewish community here in Mobile,” says McCarron. “They are just so philanthropic and passionate and it really impacts our ability to advance our mission. There are so many families, beyond the Meislers and the Mitchells (another well-known Mobile family). Our community should be grateful; people may not need these services today, but they may in the future.”

McCarron, who is from Louisiana and Catholic, a religion, she says, that “teaches philanthropy to some extent,” asked during a recent interview with Southern Jewish Life if philanthropy is especially taught and emphasized in the Jewish faith. “I get the feeling that Jewish people believe that it is their duty to give back — and not just in the area of healthcare. Their giving involves other programs, such as athletics and helping students succeed. They do so much.”

And, she adds with admiration, “I talk to members of the Jewish community all the time. Our leading Jewish donors don’t just give their money and walk away, they want to be engaged.”

There is no better example of a Jewish Mobilian committed to using his wealth to benefit community causes than Bert Meisler. While he has given to many causes, locally and nationally, Jewish and otherwise, Bert became involved with USA in the 1960s through his relationship with the school’s basketball coach. He became an advocate for USA athletics and a leading donor.

That involvement would lead to Bert and Fanny making a large gift to name the school’s administration building Meisler Hall — a building, which Bert notes with pride, that “every student goes through.”

The Meislers have also funded the Jewish Studies program at USA.

In essence, Bert and Fanny wound up giving millions of dollars to USA over the decades, something this Newark, N.J. native could never have imagined when he was growing up in modest circumstances. Bert, now 93, looks back on his business success and the prosperity he achieved after marrying Fanny and moving to her hometown of Mobile.

He and Fanny’s brother, Harold Ripps, who now lives in Birmingham, became partners. They’ve been a great team and close friends for decades. They have prospered in several businesses; in particular the real estate business through their company RIME (RI for Ripps; ME for Meisler).

Knowing Bert over the years and talking to him more recently in connection with the opening of the Fanny Meisler Trauma Center has been a great experience. He has been passionate about Jewish life — having made transformative gifts to Camp Ramah and his local synagogue, Ahavas Chesed — and to the broader Mobile community, which has named him as its “Philanthropist of the Year.”

Most significantly, however, is Bert is just a really nice down to earth guy. He’s easy to talk to, fun to be with, and even though some late in life physical challenges have slowed him down a little bit, his spirit and intellect remain strong.

This admired philanthropist, the father of five children, is grateful for the blessings that have been bestowed on him. How would he like to be remembered? “As a nice guy whose word was his bond,” he answers. “I am not worried about monuments.”