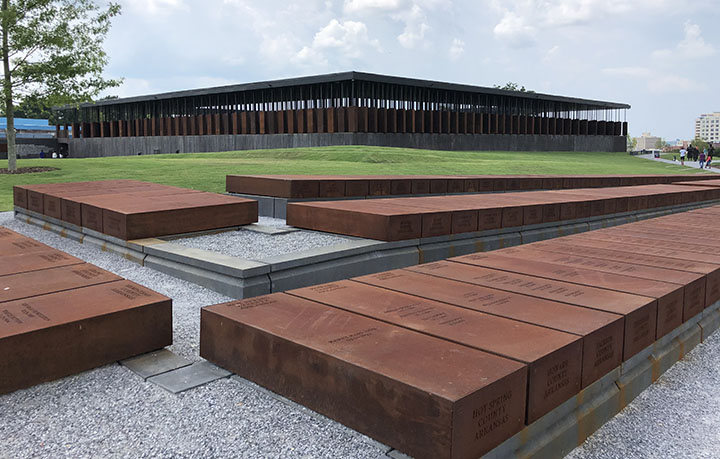 The National Memorial for Peace and Justice in Montgomery

Talk to Joi Brown, director of the Jefferson County Memorial Project, about the Birmingham-area Jewish community’s support for her efforts, and the person she credits is long-time Jewish community volunteer leader Jim Sokol.

Born 50 years apart, the two connected around a common cause:  Remembering the challenges the African-American community has faced in America, which continue today, and a determination to educate as many people as possible.

There are two other people, though, who have played roles in motivating Brown and Sokol to connect and work together.  Joi’s great grandfather, who was racially lynched, and Jim’s love affair as a young boy with Jackie Robinson and his frustration that at that time, Major League Baseball banned players from competing due to skin color.

Sokol, who was born in 1938 and who will be 83 in March, carries with him a sense of guilt because of the way things were racially in Birmingham while growing up.  It was a segregated society and he saw it first-hand while working in his family’s furniture business.

“We were told to treat everybody equally,” he recalls.  “The reality is we didn’t.  We strived to treat everyone courteously but Blacks and whites were treated differently.”  There were subtle messages that Black customers were not as credit-worthy and Black employees were not as capable.

“I accepted it. That is the guilt part. Why didn’t I speak out?  I guess when I was 12 or 13, it never dawned on me to do so.  Because that is the way it was and that is the way my family operated the business.”

For both Brown and Sokol, reflecting on their family’s pasts created an awakening: A determination to educate people about the cumulative weight of Alabama’s negative racial history and how, perhaps in less visible ways, it continues to oppress both Blacks and whites today.

Changing that — through educational offerings and initiatives — is what the Jefferson County Memorial Project is about.

At the heart of it is an effort to establish a lynching memorial in Linn Park.  JCMP has drawn its inspiration from the National Memorial for Peace and Justice and the Legacy Museum in Montgomery, which probes America’s history of racism, including lynchings.

The JCMP is working with the Montgomery organization to replicate one of the lynching memorials in Birmingham’s Linn Park, in the heart of downtown.

Sokol said that site is highly significant.  It is one of Birmingham’s most well-known and heavily-traversed pieces of real estate, bordered by Birmingham City Hall on one side and the Jefferson County Courthouse on the other.

Beyond that, at least one of the racial lynchings memorialized in Montgomery took place in the park, a historical fact that Brown and Sokol believe is unknown to the vast majority of people who walk through the park every day.

Sokol is passionate about JCMP, which is not surprising to those who know him.  As a long-time supporter of a vast number of Jewish and broader community causes, and a past president of the Birmingham Jewish Federation, efforts to deepen relations among different groups in Birmingham have been especially close to his heart.

Equally important to Sokol is that those in the broader community who he works with on various projects always see him as a member of the Jewish community.  He believes deeply that Jews should be at the forefront of all good causes and sees himself as an “ambassador.”

It’s been a long held belief that he inherited from three mentors in particular, community leader Joel Rotenstreich and philanthropists Hal Abroms and the late Emil Hess.

Yet, while looking back at those who have mentored him, he looks ahead to working with younger people, such as the 32-year-old Brown.

It’s easy to see why. Brown is passionate and driven about her relatively new role heading the JCMP, still in its initial stages.

In addition to Sokol, she singles out two others in the Jewish community who, in particular, have helped her.

One is Joyce T. Shevin of the Birmingham Jewish Federation’s Jewish Community Relations Council. Says Brown, “I can’t thank her enough.  She is supportive and really helpful.”

The other person is Temple Beth-El’s Margaret Norman, who facilitated a recent online program featuring Brown and JCMP, as part of Temple Beth-El’s current focus on the Civil Rights movement and Black-Jewish relations.

Norman worked for JCMP before joining the staff of Temple Beth-El and believes in the “inherent value of understanding the past as it relates to the future.”

Brown was asked if prior to her current role, she had much interaction with Jewish people. She did, but it was mostly from growing up in Chicago.

“I had Jewish friends. I remember being in school when we learned about Chanukah and other Jewish holidays. I would go to their houses and meet their families.” She then moved to South Florida, which expanded her network of Jewish contacts because of its large Jewish community.

However, in Birmingham, she said, “Things seem more polarized. Everybody seems to stay within their own group.”

Professionally, she has been “absolutely affected” by the parallels between the African-American and Jewish experiences which have been marked by genocide, enslavement, terror, oppression and discrimination.

One difference, she has noticed, is that the Jewish community seems to be more willing to talk about the horrors it has faced in the past than the African-American community, something she would like to change.

“Within the African-American community, we don’t talk about the terror, such as lynching. When I started doing this work and interacted with the Jewish community, they were more open to talk about their history and to draw parallels with the Holocaust and hate crimes,” she said.

“I have tried to bring up with family members the difficulties African-Americans have faced. But they say, ‘Why bring this up? It is in the past.  Why talk about it?’ Maybe it is because racism and its manifestations, such as mass incarceration, are continuing and just too hard to talk about.”