Marjorie Taylor Greene removed from committees, but Democrats don’t have clean hands either 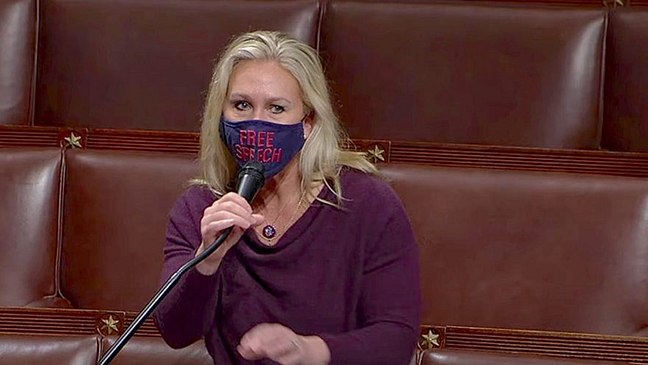 Rep. Marjorie Taylor Greene (R-Ga.) speaking to the House of Representatives ahead of a vote on whether or not to remove her from House committees. Source: Screenshot/C-Span.

(JNS) — Marjorie Taylor Greene is no martyr. Though there was no precedent for a majority party to punish a member of the minority in this way, the largely party-line vote to banish the Republican Georgia representative from congressional committees is no injustice.

Her history of shocking statements supporting conspiracy theories of all sorts, including her backing of the QAnon cult and the bizarre claim that a laser backed by the Rothschilds created wildfires on the West Coast were anti-Semitic in nature. A member of Congress that had also denied the reality of mass school shootings or the 9/11 attacks, or who supported violence against members of the opposing party, cannot expect to claim victim status for being singled out for behavior that Senate Minority Leader Mitch McConnell rightly labeled as “loony lies.”

That all but 11 of her Republican colleagues chose not to vote to punish her is more than regrettable. As I pointed out earlier, it’s proof of the toxic partisanship that prevails in Washington. The GOP feels that it cannot repudiate extremists in its caucus because of the baleful influence of some supporters of former President Donald Trump and the plainly partisan motives of their Democratic foes. It is a blot on their record and deprives them of any claim to the moral high ground when discussing anti-Semitism.

Nor can critiques of the cancel culture that has become the left’s weapon of choice to delegitimize conservatives justify the GOP stand. That’s especially true when House Republican Leader Kevin McCarthy applied a more rigorous standard to another right-wing extremist. In retrospect, former Iowa congressman Steve King was a moderate when compared to Taylor Greene, yet McCarthy needed no prodding from Democrats to ostracize him in 2019.

But to acknowledge the failure of the Republicans and the dismal political context that made it inevitable should not blind us to the hypocrisy of their opponents in this debate. Democrats can’t be blamed for seeking to embarrass their opponents by making an issue of the way the GOP has winked at Taylor Greene’s faults. Still, their arrogant and disingenuous refusal to acknowledge that they did much the same thing in 2019 is just as indefensible as McCarthy’s efforts to evade his responsibility to act.

The insistence of Democrats and their always faithful mainstream media cheering section that there is no comparison between Taylor Greene and Rep. Ilhan Omar (D-Minn.) is every bit as dishonest as anything we’ve heard from the other side of the aisle on this issue.

The Democrats’ party line in which Omar is to be treated as a decent, well-meaning person who strayed momentarily more out of ignorance than ill will into tweeting anti-Semitic tropes about Jews purchasing congressional support for Israel and in displaying dual loyalty is not merely breathtaking in its mendacity. It gives the lie to their claim of intolerance for anti-Semitism. Even worse, it shows that their adherence to the International Holocaust Remembrance Alliance’s definition of the term, which has been accepted by the Biden administration as well as dozens of other governments, is mere lip service.

That Democrats refused to punish Omar for statements she made after entering Congress — as opposed to Taylor Greene, who was censured for things she said mostly before her election — was as easily understood as the GOP’s reluctance to discipline their wayward member. Omar was the first Muslim woman, the first Somali American and the first naturalized immigrant from Africa to enter Congress — a virtual one-woman diversity show. Her radical leftist beliefs, and that of other members of the so-called “Squad,” exemplify the heartfelt sentiments of the Democrats’ activist base.

That is why House Speaker Nancy Pelosi chose, as McCarthy did this week to Taylor Greene, to give Omar a pass for her transgression. Rather than allow a motion censuring her for anti-Semitism, the Democratic leadership put forward a hodge-podge resolution declaring opposition to all forms of hate that didn’t even mention her by name.

Democrats accepted Omar’s weasel-worded apologies about her aspersions against both Jews and non-Jewish colleagues who are supporters of Israel without question. That’s a standard they didn’t apply to Taylor Greene’s apologies, which they rejected as both insufficient and insincere. While they encouraged dialogue between Omar and Jewish members in order to educate her, they went all out to banish Taylor Greene.

That they got away with this bare-faced hypocrisy was due to two factors.

One was the willingness of both the media and pop-culture outlets not merely to forgive Omar, but to embrace her as a role model without asking any pertinent or probing questions about why it was that she said the things she did.

The second was the fact that Omar’s form of prejudice is far more socially acceptable than that of Taylor Greene. While Omar speaks in the language of liberal social-justice dogma and the fashionable myths of intersectionality, Taylor Greene is an evangelical Christian. Her “loony lies” about 9/11, school shootings and QAnon conspiracies are the sort of thing that most people think should qualify a person for commitment to an insane asylum. By contrast, Omar’s anti-Semitic beliefs are the sort of thing that is required in order to receive tenure on most university Middle East studies faculties.

Taylor Greene’s brand of bias ought to be treated as beyond the pale. Nor can the similarity of her past beliefs — if, indeed, we are to accept that they are part of a past that she has now rejected — with that of many of the extremists who stormed the Capitol last month be denied, a point that lent weight to claims that she has no place in a Congress that was threatened by that violent mob.

But it is equally true that Omar’s more presentable prejudice may, in its own way, be just as dangerous and is far more insidious.

Omar and fellow “Squad” member Rep. Rashida Tlaib (D-Mich.) are ardent supporters of the BDS movement. BDS is a flagrantly anti-Semitic cause predicated on — in contravention to the IHRA definition — denial of rights to Jews that are not denied to anyone else. Far from an aberration, their anti-Semitism is in line with their beliefs about the need to eliminate the one Jewish state on the planet.

Nor is Omar the only Democrat guilty of anti-Semitism. The same label could be applied to Rep. Hank Johnson, who called Israeli Jews “termites.” Tlaib and the newest “Squad” member, Rep. Jamaal Bowman (D-N.Y.), both supported the anti-Semitic blood libel in which Israel is falsely accused of denying the Covid-19 vaccine to Palestinians. Yet there are no plans to give them the same punishment accorded Taylor Greene.

And just as support for QAnon conspiracies is inextricably linked to both anti-Semitism and mob violence, so, too, is support for BDS to the efforts of those who seek to shun, silence and intimidate Jewish students on college campuses, as well as the hostility of those Middle Eastern forces that seek Israel’s end by means of violence and terror.

The Democrats’ defense of Omar and Tlaib legitimizes left-wing anti-Semitism. In doing so, they are pretending that Jew-hatred only comes from the right and helps strengthen a form of hate that is already found a foothold on the margins of their party.

Having set a precedent by which a majority may punish extremists in the minority, Democrats will have no leg to stand on when the next time a GOP majority controls the House, they return the favor and give Omar, Tlaib and any other BDS-supporting member the same punishment doled out to Taylor Greene.

The Democrats’ soft spot for their BDS-supporting rock stars of “The Squad” is no different from what they assert is the GOP’s tolerance for right-wing extremists who supported Trump. Indeed, their dishonesty in not merely tolerating the likes of Omar and Tlaib, but celebrating and rewarding them with choice committee assignments — all the while declaring that Republicans are abetting racism and anti-Semitism by defending Taylor Greene — is no less disgraceful than the behavior of their opponents.

Jonathan S. Tobin is editor in chief of JNS—Jewish News Syndicate. Follow him on Twitter at: @jonathans_tobin.