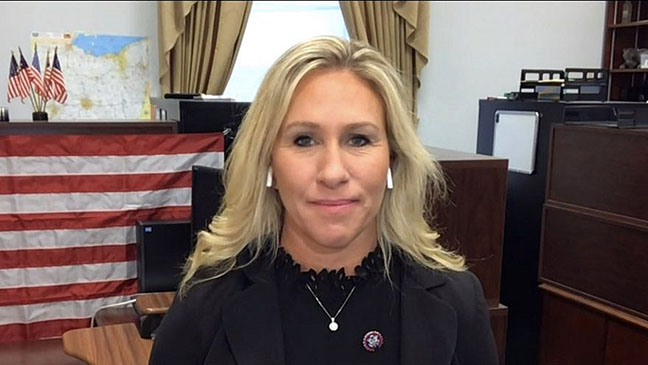 Why are some right-of-center Jewish groups finding it so difficult to publicly condemn antisemitic congresswoman Marjorie Taylor Greene?

A few, such as the Republican Jewish Coalition and the Coalition for Jewish Values, have spoken out. Herut too condemns Marjorie Taylor Greene’s extremism and her endorsements of antisemitic conspiracies. But too many others have remained silent.

The silence of other organizations surely cannot be because of any doubts regarding Greene’s record of espousing antisemitism, violence, and lunatic conspiracy theories.

After all, that ugly record speaks for itself — in volumes. In videotaped diatribes, tweets and retweets over the past several years, Rep. Greene has irresponsibly shared conspiracies that the Rothschilds started brush fires in California, railed against “Zionist supremacists,” promoted the antisemitic QAnon movement, encouraged violence against congressional leaders, and claimed that the 9/11 attacks, the Las Vegas massacre, and various school shootings were hoaxes.

Considering how often Jews have been targeted — and hurt — by conspiracy-mongering,  you would assume that every Zionist and Jewish organization, from right to left, would speak out against Greene. Those on the left have. But not all those on the right have.

It’s not just a matter of credibility. It’s also a matter of effectiveness. When groups on the left denounce Marjorie Greene, it doesn’t have much impact. They’re obviously her political opponents. Their criticism is not particularly impressive. But when groups on the right condemn her, it matters. It packs a punch. It shows that even people who might agree with her on some other issues, have come to recognize that she is a beyond-the-pale extremist.

At the end of the day, antisemites don’t make political distinctions. They hate all Jews. To counter them, Jewish organizations likewise must take a bipartisan approach of condemning all antisemites.

Is it possible that some Jewish groups which were sympathetic to President Trump are silent on Greene because Trump has praised her? I hope that’s not the case. The first responsibility of leaders of Jewish and Zionist organizations is supposed to be to their members and to the Jewish people, not to a particular political party or a particular former president.

The fact that the Trump administration took a number of pro-Israel actions does not mean that the Jewish community has some obligation to follow him in embracing Greene.

We can appreciate the relocation of the U.S. embassy to Jerusalem without embracing every fringe element on the American political far right. We can praise the U.S. recognition of Israeli sovereignty on the Golan Heights without subscribing to thoroughly debunked conspiracy theories about the recent election. We can support the reduction in U.S. aid to the Palestinian Authority without stooping to absurd and baseless claims about the Capitol Hill rioters actually being secret Antifa provocateurs.

Right-of-center Jewish groups have shown over the years that they can be quite prolific and vocal when they want to be. When they have an opinion on some issue, they make it clear. And that makes their silence regarding Marjorie Taylor Greene’s extremism all the more conspicuous, and all the more disturbing.

Moshe Phillips is national director of Herut North America’s U.S. division; Herut is an international movement for Zionist pride and education and is dedicated to the ideals of pre-World War Two Zionist leader Ze’ev Jabotinsky. Herut’s website is www.herutna.org