Personal work: From Houma to the world of Israeli diplomacy 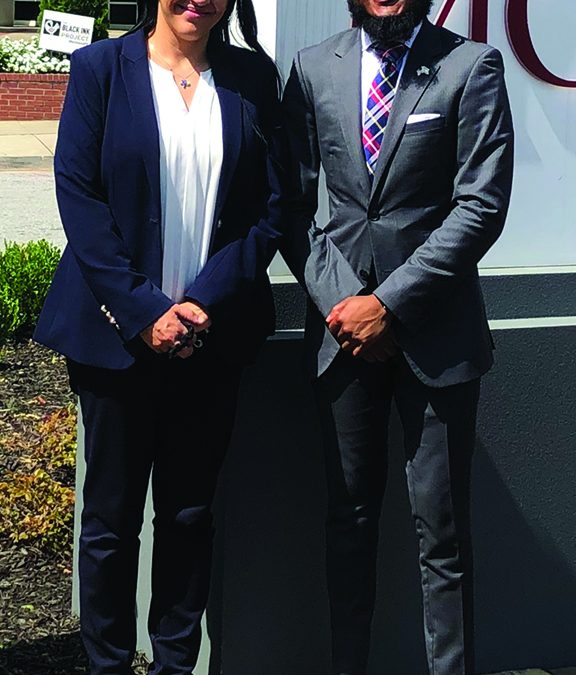 Pictured, from left, are Consul General Anat Sultan-Dadon and Wendell Shelby-Wallace on the day they met at Morehouse College.

How does a young African-American Christian, from a smaller, lesser-known town in Louisiana, wind up working for Israel’s Consulate General to the Southeast in a high-profile role?

The answer is simple, and complex: 27-year-old Wendell Shelby-Wallace has been on a journey almost from day one. He has had an array of speed bumps and a few daunting challenges and even some detours along the way.

Still, through his determination, passion for causes, and being in the right place at the right time, Shelby-Wallace, who grew up in Houma, landed a job with the Atlanta-based Israeli Consulate to the Southeast.

On one hand, his current employment might reflect a strange turn of events. On the other hand, it is a natural extension of this driven young man’s commitment to make a difference — a relentless drive that informs every day of his life

Having started out as a public relations director for the Consulate, Shelby-Wallace, largely through his energy, talents and engaging warmth, has built relationships at the Consulate and beyond which have led to a significant expansion of his responsibilities and visibility.

Today, he is the Consulate’s Director of External Affairs, Strategic Partnerships and Initiatives. In this role, he is responsible for outreach to the African-American, Hispanic, LGBTQIA+, Christian, Muslim and Progressive communities. He also, as an outgrowth of his public relations role, continues to work with the media, making sure the Consulate’s message is delivered in a precise and positive way. Promoting the Consulate’s cultural and educational offerings also is part of his job.

Growing up in Houma, located in Southeast Louisiana, Shelby-Wallace joined the NAACP at age 13 and became its local young president, a foreshadowing of his commitment to causes. “I really got involved with social justice, but at the time didn’t fully understand the term,” he remembers. “These activities brought me into an area that was new for me, fighting for racial justice.”

In high school, Shelby-Wallace got involved in lots of activities and leadership roles, which would lead to his induction into his school’s Hall of Fame. “All of this put me in a place where I not just focused on myself but I focused on what I could do to make the world a better place.”

He received a full scholarship to Louisiana State University, but once there, began struggling academically and emotionally due to the death of his father. He withdrew from school, began working full-time in the area of disaster recovery, and intended to finish school part-time.

It was a transitional time for a young man whose life, it seemed, had always been in transition.

Behind his story was another story. His birth mother had given him up as an infant, placing him with the couple who he would come to consider his parents in every way imaginable. He thought he had been legally adopted until he found out he wasn’t.

His legal father was in prison, which created complications for Shelby-Wallace when he began applying to college, which is how he wound up at LSU after dreaming of going to Harvard, Georgetown or Morehouse. LSU was just easier for him to navigate the red tape he was tangled in because of the custody complications.

As he was dying, he asked Shelby-Wallace to promise him that he would work hard, use all of his God-given abilities, and make an impact on the world. “As he was dying in 2012, Daddy told me to ‘Finish Strong,’ which I have adopted as my mantra for life.” So, with these words imprinted on his heart, Shelby-Wallace did a turnabout, which led him to Atlanta’s Morehouse College.

It was there that he blossomed, never looking back. Wearing a Morehouse sweatshirt as he explained all this in a recent FaceTime interview, Shelby-Wallace expressed his gratitude as he recounted embracing this second chance.

He secured ample financial aid, landed some key part-time jobs working closely with administration figures, and became involved in student activities — so much so that he was elected Student Government Association VP and became president of the Senate. At Morehouse, he also became involved with the American Israel Public Affairs Committee, which had a presence on the Morehouse campus.

The more he learned about Israel, the more passionate he became about the Jewish people and the Jewish state. Participating in retreats, seminars, AIPAC’s National Policy Conference and a trip to Israel were among the highlights. Then the turning point came when he least expected it.

“I happened to have just gotten back from Israel, and also was a program assistant to the dean of the college. As a student ambassador, I also gave campus tours. One day, in July of 2019, I got a call from the executive assistant to the Morehouse president who said, ‘We have a really important visitor coming on campus and we’d love for you to give her a tour.’ So I said sure.”

That visitor turned out to be Israel’s new Consul General to the Southeast, Anat Sultan-Dadon. She and Shelby-Wallace, two outgoing and passionate people, clicked. “She asked how familiar I was with Israel. I told her I had become the campus liaison for AIPAC and had been to a lot of programming. She asked, ‘How do you get people involved with Israel, particularly Black students and the Black community?’”

“It really is simple, I told her. I tell people that as Americans, we have a vested interest in Israel as one of the few countries in that region of the world that is a democracy. We also have a vested interest in being partners with Israel — from a national security viewpoint, innovation-wise, and all the things that Israel is great at. We also have a strong history, especially in the South during the Civil Rights era, of shared legacies between African-Americans and the Jewish community.”

As they got back into the car, the Consul General asked him what he was going to do after he finished Morehouse. “I said probably go home to spend time with my family and get ready for law school or graduate school. She asked me if I was interested in working for the Consulate. I had a lot on my plate at that time, so we agreed I would start working part-time.” Shelby-Wallace started in the public relations area but his work soon expanded to outreach to the African-American community.

As he finished at Morehouse, he planned to remain with the Consulate until the summer of 2020, planning to then pursue a master’s of education degree from Boston University and a teaching fellowship at Epiphany School, a private school in Massachusetts.

However, in what he calls “a bittersweet result” of the Covid pandemic, Shelby-Wallace deferred the launch of these plans, deciding it was more critical to remain in the South with family and continue combating the hate and bigotry that he had encountered through his work for the Consulate and other experiences.

Shelby-Wallace, who is a Christian minister, was asked in the above-mentioned FaceTime conversation what motivated him to become interested in Israel and involved in AIPAC. The organization is known for reaching out to campus leaders, including those at Historically Black Colleges and Universities, and a friend of his had become involved in AIPAC and got Shelby-Wallace interested.

In addition, he had worked in some political campaigns between his time at LSU and Morehouse and the political process interested him. He began his AIPAC involvement by attending a retreat in Washington for African-American student leaders.

“We unpacked the history of Israel, and we started to talk about why this matters. We were able to speak with some Black elected officials who were very supportive of Israel.” He later attended a Hispanic students retreat. (He is part Hispanic and also part Native American, though considers himself Black more than anything.)

Turning to the future, Shelby-Wallace explained, “My original agreement with the Consul General was to be here until May of 2020, but I was asked to stay on part-time which has now led back to full-time because of the challenges created by the Covid pandemic.”

It’s not surprising that he is staying on, at least for now. “I decided to stay committed to my work at the Consulate because of the opportunity we have to connect with people who we previously have not connected with.” That is part of the reason.

Another part is his admiration for Consul General Sultan-Dadon. “I have worked for quite a few people but have never had a supervisor who has been so visionary yet so practical, who can be unapologetic while being diplomatic.”

He describes the objectives of the Consulate as two-fold, in effect a two-way street: First, to build relationships with various constituencies to educate them and engage them in Israel. Second, for Israel to engage with the Southeast region; to contribute to life overall in the Southeast, connect with as many people as possible and build alliances.

The work is also personal for him.

“I wake up every day and ask God ‘How can I be used today? What can I do to fulfill my purpose?’ My work is about making connections with people for the greater good of everyone. As we say in the Christian faith, ‘You don’t get tired of the work, you get tired in the work.’ It’s tiring, yes, but I see it as my purpose to uproot hatred and bigotry to plant love and peace. This is what my job with the Consulate allows.”

As a Christian, he feels a deep attachment to Israel, knowing that it is the land where his Messiah, a Jew by the name of Jesus, lived and preached, and that Judaism provided the roots of Christianity. Moreover, every time the Consulate has a program or he has a conversation, especially if the person emerges with a deeper understanding and greater appreciation of Israel, he gets energized.

Just like the country he represents through his Consulate work, Louisiana native Wendell Shelby-Wallace has had his share of twists and turns and ups and downs in a relatively short time. But like Israel, he keeps ascending.

In fact, the lesson instilled in him by the man who raised him — “Finish Strong” — could also be applied to the Israeli people. For they, like this Consulate employee, are undergirded by an unshakeable determination — and faith in themselves and the future.