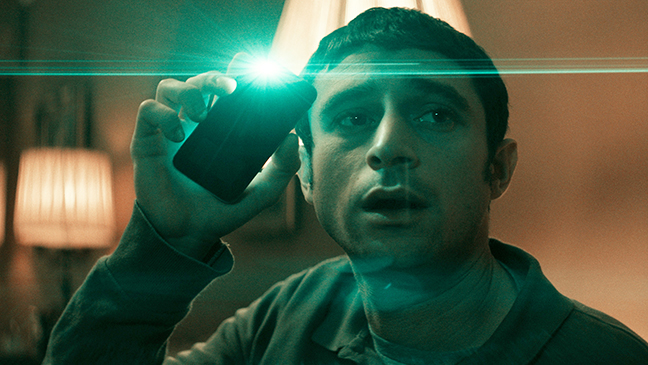 While “The Vigil,” which went into mass release on Feb. 26, is being referred to as the first fully-Jewish horror film, Dave Davis says it is important for much more than that, because it promotes understanding by bringing people “into a world that is not their world.”

Davis, who is from New Orleans, plays Yakov, who has left the Chassidic community in New York following a personal trauma. His former rabbi reaches out to him to be a “shomer,” the person who sits with a body overnight before the funeral. Low on funds, Yakov reluctantly agrees, but quickly finds that things are not what they seem.

Keith Thomas, who wrote and directed the film, said he first learned of the shomer when he was pursuing a Masters in Jewish Education at Hebrew Union College in New York. At an Orthodox shul one day, he heard two older men talking about a shomer who had left because he was scared. “That stayed with me,” he said.

Years later, when looking at ideas for films, he said “How is it that nobody has made a shomer horror movie? It’s the perfect setting. Someone with a dead body? How has this not been done?”

He researched the “short list” of Jewish horror cinema, which was mainly the usual characters — a dybbuk or golem — “imported into a, typically, Christian environment. I knew I wanted to tell a Jewish horror story rooted in Jewish experience.”

While researching shedim, the demons in Jewish lore, he came across a vague character, the Mazzik, which means “destroyer.”

“It’s very much based on an entity recounted in Talmudic lore,” Thomas said. ”For me, the best scares are rooted in character. I tried to avoid jump scares that operated on the instinctual startle reflex and went for deeper, more existential sorts of terror. The demon was key to blending the religious and horror aspects.”

Born in New Jersey, Davis grew up in New Orleans. Two years after Katrina, he graduated from the Lawrenceville School in New Jersey, then earned a degree in theatre at Tulane in 2011.

His path to performing came because “you’re born with it,” he said. “I was dancing around from the youngest of ages,” and his parents “really supported me, when I figured out maybe I had a future with it.”

He acted in numerous productions, including playing Joseph in “The Amazing Technicolor Dreamcoat” when he was 10 or 11. He went to ensemble theatre summer school and “learned the basics about various acting styles, set design, building, we got to learn different pieces of the theater.”

However, his parents “were smart enough to not let me act professionally as a kid.” That allowed him to “grow as a person before diving into professional acting, which can be all-consuming” with many challenges.

While he was at Tulane, “Hollywood South was blowing up” in New Orleans. “It was a beautiful blessing for me.”

After starring in “This Is Our Youth” for his thesis, he became involved with the New Orleans Shakespeare Festival, playing Hamlet in 2012. He then transitioned to the screen.

Davis “got in with some important casting directors, booked a couple early auditions which built confidence,” he said. “Work begets work, when you have credits it helps to get more credits.”

He met local filmmakers of independent films, SyFy channel movies and short films, and started making his own music videos and short films. “Someone will call and say, hey, I’m working on my short film,” he said, and the circle widens.

He had roles in “The Walking Dead,” ”True Detective” and “NCIS: New Orleans.” He also starred in films like “Ghost Shark,” “Leprechaun’s Revenge” and “Ozark Sharks.”

In 2015 he relocated to Los Angeles, but whenever an audition came up, he was in LA, whether Los Angeles or Louisiana. “There was one month I flew back between Los Angeles and New Orleans 20 times” because he hadn’t told many people he had relocated.

With Covid restrictions making a physical presence in Los Angeles less important, and with how difficult it can be to live in Los Angeles, he decided it was “the right time to come home to New Orleans. I always knew I wanted to come back… with the world in upheaval and the opportunity to go home, it was a no-brainer.”

Besides, he said New Orleans “gets in your bones. When you leave for too long it gets out of your bones. I would notice myself becoming an LA person and say I gotta get back to New Orleans.”

In 2017, through friends in New Orleans, he had the opportunity to portray Brian Deneke in “Bomb City,” the true story of a clash between high school jocks and the punk community in Amarillo, Tex. The tension resulted in the death of Deneke, and controversy over the light sentence for the jock who killed him.

At the time, Keith Thomas was writing “The Vigil” and starting to formulate plans for the film. He saw Davis in “Bomb City.” Though Davis was sporting a two-foot green mohawk, Davis said Thomas’ “Jewdar went off” and he said “now, that’s my guy to play the Chassidic New Yorker.”

Thomas said it was “bashert.” He was looking for someone who could “express, largely wordlessly, the deep-seated fear and trepidation inherent to my protagonist. He had to be vulnerable and emotionally broken but at the same time headstrong and wanting help — a tough balance.”

When Davis read the script, “I fell in love with it… it’s about so much more than a horror film.”

Though Yakov comes from a community “with a background that is very foreign to Americans… at the end of the day he is dealing with the same things we all are dealing with,” including mental health, the grieving process, and “how do we interpret” generational trauma.

Since his character had left the community, he started by meeting with participants in Footsteps, a group that was established for those who leave the Chassidic lifestyle. Davis said one has to remember that often, those individuals have been speaking English for just a few years, or only recently saw a movie for the first time.

“We tried to paint it in the most authentic way possible, no judgment, just a story about a person who comes from this community who has left this community and is trying to survive in this new-to-him secular world,” Davis said.

The film was shot in the Chassidic community in New York. Thomas said productions that have filmed there in the past have done so in a “guerilla fashion,” but they needed a longer presence, including laying tracks. “We shot overnight and had quite a huge crowd watching us — almost all Hasidic men and boys — until the early hours of the morning. Most were fascinated and asked us questions, a few were insulted, but we had rabbinic help on site as well as translators.”

He added, “we were also very careful to be as respectful as possible with our presence in the community.”

For the role, Davis had to learn a lot of Yiddish. He had his Bar Mitzvah at Touro Synagogue and “can read a little Hebrew but I don’t understand it.” As he immersed himself in the role, he quickly discovered that he knew a lot more Yiddish than he thought. “My great-grandparents spoke it, all my grandparents grew up with Yiddish around them… the more I heard and listened, the more I realized I already knew.”

He would work on his Yiddish with Malky Goldman, who plays Sarah in the film. She grew up in a Yiddish-speaking household in Jerusalem and has appeared on “Unorthodox.” Davis would throw out various ideas, such as if he stubs his toe in a scene, what are five natural reactions that Yakov might have, as opposed to what he would do in real life as himself. “I never wanted to be doing an imitation,” Davis said, but wanted to “understand Yakov, who he is, where he comes from.”

He said it was “the most difficult performance of my life, and completely rewarding.”

Thomas said that most Jews in the secular world don’t believe in demons or magic, and Davis said he was unfamiliar with those traditions. He was surprised when those in the Chassidic community would refer to hell, which is used as a concept to keep followers from straying too far from the community.

“I had never really heard anything about demons,” he said, but now says “the script was haunted, in a way.”

Being from New Orleans, “I know a thing or two about hauntings.”

In the story, “Yakov is alone, creating these demons, and isn’t sure if they are in his mind or not.” As Davis read through the script, he decided to play with the idea of summoning demons with his mind. He would look intently over his girlfriend’s shoulder, which concerned her.

After a while, “the biggest spider I’ve ever seen appears on the wall” in that area behind her, “and it felt like I’d conjured it.” At first he thought it was a tarantula, but it turned out to be a wolf spider.

Returning to the script, two pages later, he saw that a wolf spider appears and goes across Yakov’s foot.

“She banned the script being read at night,” Davis recalled.

Thomas wanted to shoot in a real house with the layers of history and authenticity. “I really needed the authenticity of a very real structure. I needed those layers of aged paint, those stains on the carpet, the cracks in the ceiling,” he said.

One of the film’s producers had just bought a house where the woman who had been living there had recently died. Davis said the wallpaper, tapestries, curtains and personal effects added authenticity and “a really spooky vibe on-set.”

Not only were they borrowing a community to tell a story, Davis said, “we’re borrowing a woman’s house,” which made a “profound difference” in the determination to be respectful.

Davis said “The Vigil” is “a really important story to tell. It talks about a community that is mariginalized and misrepresented often.”

As “The Vigil” was being released, there was a major controversy over an episode of “The Nurses” on NBC, which depicted Chassidic Jews erroneously, and in a hateful manner. After days of protests, NBC pulled the episode from its streaming services, and the Canadian production company apologized for inadequate research. “To not be concerned with getting it right is incredibly offensive,” he said.

The rash of hate crimes against the Chassidic community in New York was also a concern. “There was a crime while we were filming, to the point where we were afraid,” he said. “As I’m in costume walking several blocks down the city street, do I need to be concerned about someone attacking me? The answer was yes.”

He added, “This is not a safe place for everyone right now, and that’s why films like this are so important.”

One of the most rewarding aspects for Davis was living a new experience. One can watch a film, he said, but living it gives a much deeper understanding. “I got the incredible experience of living it and making new friends, and having first-hand experience with a community I might never have” otherwise.

Davis is excited that the film “is finally out for people to see,” as it and similar projects can bridge gaps among groups.

Completed in 2019, “The Vigil” debuted at the Toronto International Film Festival that September. There was a limited international release last summer, and it was released by IFC Midnight in the United States on Feb. 26. In New Orleans, the film is showing at The Prytania Canal Place, and it is also screening in Memphis and Atlanta. It is also available on numerous streaming services for home viewing.