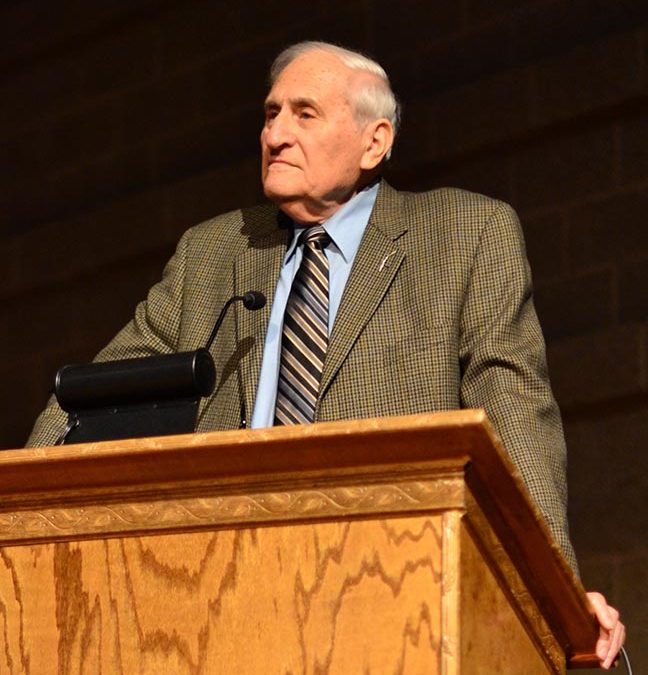 Max Steinmetz, a Holocaust survivor who wound up in Birmingham and spoke extensively to students about his experiences, died on March 4.

Steinmetz, 96, was a native of Romania. At the age of 17, he and his family were taken into captivity by the Nazis and eventually taken to Auschwitz, where his parents, Ilona and Louis Markowitz, and his sister, Esther, were immediately put to death in a gas chamber after they encountered the infamous “angel of death” Josef Mengele. His brother, Henry, died while imprisoned with Max at Dachau.

Steinmetz survived the Holocaust by escaping during a Death March out of Dachau. Sick and hallucinating, and weighing 80 pounds, he found a local farmhouse where the wife of a Nazi officer let him in, just days before the area was liberated.

He obtained a visa to move to the United States in 1948, working for his passage in the ship’s kitchen. Upon arriving in New York in late 1948, he began a business career which eventually brought him to Birmingham in 1955 to work for Dan Cohen Shoe Company. After Dan Cohen, Max worked for Bargain Town USA, eventually serving as its vice president, where he oversaw the shoe department for the chain of stores for approximately 30 years.

Steinmetz spent the last 30 years of his life committed to Holocaust education. He spoke to thousands of people throughout Alabama and other states about the facts that led to the Holocaust and its impact on his life.

In a statement, the Birmingham Holocaust Education Center said Steinmetz “shared his story of survival with hundreds of young people, small audiences and large, with his wife Betty always at his side.”

Concerned that the stories of survivors would be lost to future generations, Steinmetz worked with local teacher Amy McDonald to produce a book, “Determined to Survive: A Story of Survival and One Teacher’s Passion to Bring That Story to Life.”

In 1962, he married Betty Friedman. In addition to her, he is survived by children Stephen (Stephanie) Steinmetz, Lisa (Scott) Morchower, and Caren (Donnie) Fox; six grandchildren, Charlie and Jack Steinmetz, Erica and Elana Morchower, and Hannah and Rachel Fox, several nieces, grand-nieces, a grand-nephew, and many friends.

The family established a fund in his honor at BHEC to support his commitment to Holocaust education. A funeral service is scheduled for 11 a.m. on March 7 at Elmwood Cemetery’s Temple Emanu-El section. It is open to all, and a Zoom will also be available.