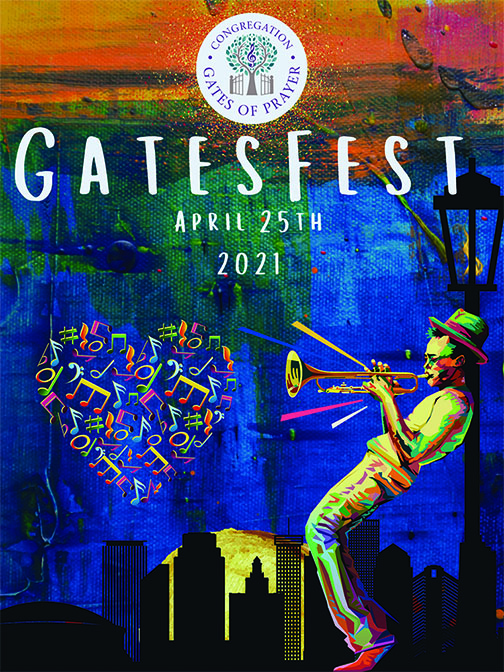 When will live music festivals return to New Orleans? According to Gates of Prayer in Metairie, on April 25.

The congregation is hosting GatesFest, a Covid-safe music and art festival. The event will feature two stages and an art village.

The music acts will alternate between the two stages which are on the same side of the festival space. At 10 a.m. Gates of Prayer Rabbi David Gerber will offer an opening prayer from the Morris Bart Main Stage, followed by Jeremy Dvorin doing the National Anthem. At 10:20 a.m., the Dapper Dandies will begin on the Secondary Stage, with the acts alternating between the stages for the rest of the day.

The Art Village will feature about 20 local artists, and the space along Richland Avenue will be capacity-controlled.

The entire festival will also be streamed online.

Those attending will be in pods, with up to three people in a 7-foot by 3-foot pod, and up to six in a 7-by-7 pod. Children under 12 do not count toward the pod limit. Attendees must stay within their pod and not mingle with other pods, and it is expected that all members of a pod are from the same family or quarantine group. One may leave the pod only for bathroom breaks or to get refreshments, but must social distance. Coolers will be allowed for bringing in snacks and non-alcoholic beverages.

Everyone in attendance will be temperature-checked and questioned for symptoms, with anyone who has a fever or symptoms being denied entry. Masks will be required. Officers from the Jefferson Parish Sheriff’s Office and volunteers will be making sure guidelines are enforced.

The Krewe of GatesFest level is $2500 and includes a large pod, banner on West Esplanade, VIP area with indoor restrooms and private catering, an open bar, food and beverage delivery to the pod, an on-site parking pass and more. The VIP Mini Pod is $1250, and includes a small pod, VIP area access and open bar. Sponsorships are also available.

Tickets can be re-sold, but the congregation must be notified of any changes in who will attend. There will be a rain date of May 2.