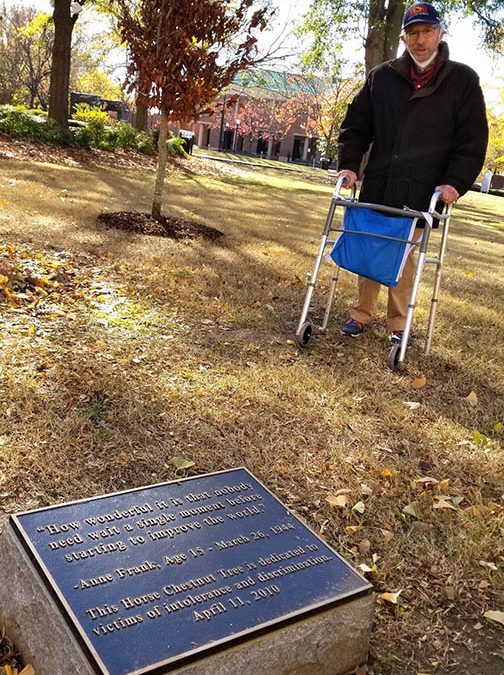 Though this year’s state commemoration of Holocaust Remembrance Day will be online, having that platform will make the event one of the more comprehensive since the events began at the Governor’s Mansion in Montgomery in the 1980s.

The event, which in recent years has been held in the Old State Capitol Building, will include the rededication of the Anne Frank Tree in Birmingham’s civil rights district. It will be held virtually on April 11 at 2 p.m.

Governor Kay Ivey will present a proclamation during the program, and there will also be a presentation from the Alabama Legislature. Birmingham Mayor Randall Woodfin will open the program, followed by an invocation from Pastor Agnes Lover of St. Paul AME Church in Montgomery.

Keynote speaker will be Pastor Chris Edmonds of the Knoxville area, who will speak about his father, Master Sgt. Roddie Edmonds, the only person recognized as Righteous Among the Nations for saving American Jews during the Holocaust. As the highest ranking U.S. officer in a German prisoner of war camp, Roddie Edmonds refused to comply with a Nazi request to separate the Jewish soldiers from the rest of the U.S. prisoners, instead telling the commander that “we are all Jews here.” It is estimated that there were 200 Jews among the prisoners at that time.

There will also be a performance by Niv Ashkenazi on one of the Violins of Hope, an artistic project comprised of instruments that were owned by Jewish musicians before and during the Holocaust. There were numerous Violins of Hope programs in Birmingham in 2018.

There will also be a candle-lighting ceremony with Holocaust survivors and their families; a memorial prayer chanted by Birmingham-based Temple Emanu-El Cantor Robert Wittner; and a closing prayer by Pastor Ed Nettles of Freewill Baptist Church in Montgomery.

The Anne Frank tree is a tribute based on references she made in her famous diary to the tree outside the Secret Annex. In 2010, the original horse chestnut tree in Amsterdam fell over in a storm after years of rot and disease. A few years earlier, saplings from that tree had been developed, and they were offered to suitable sites worldwide.

When the Anne Frank Center for Mutual Respect announced that 11 would be made available in the U.S., Joel Rotenstreich figured that Birmingham’s civil rights district would perfectly align with the message of Anne Frank. Kelly Ingram Park, known as “a place of revolution and reconciliation,” and a focal point of the 1963 demonstrations, was the obvious choice, especially as it is across the street from 16th Street Baptist Church, where four girls were killed in a Klan bombing on Sept. 15, 1963.

The proposal was made by a coalition of Birmingham Jewish and civil rights organizations, including the Birmingham Holocaust Education Center, the Jewish Community Relations Council, the Birmingham Civil Rights Institute, 16th Street Baptist Church, Birmingham Parks and Recreation and the Birmingham Public Library. They were turned down.

Undeterred, Rotenstreich figured that if the city wasn’t going to receive one of the saplings from Amsterdam, they would get their own horse chestnut tree. With the approval of the Anne Frank Center, they set out to find one that could be transported to Birmingham and planted in time for the 2010 Holocaust commemoration.

Among the sites for the original saplings were the Sept. 11 memorial in New York City, the U.S. Capitol, and Holocaust centers in Seattle, Idaho and Michigan. In this region, saplings were dedicated at the Clinton Presidential Center and Central High School in Little Rock.

In a twist of irony, the saplings had to be quarantined for at least three years upon arrival in the U.S., so Birmingham had its Anne Frank Tree years before anyone else did.

Representatives from the six organizations participated in the original dedication. Sarah Collins Rudolph, who was blinded by the blast at the church that took the life of her sister Addie Mae Collins, was also on hand for the event along with many Holocaust survivors.

In recent years, though, it became evident that Alabama’s climate is not conducive to the survival of horse chestnut trees, and the tree died. On Dec. 9, a new American beech was planted at the same site, with Rotenstreich supervising.

The rededication in April will be on the 11th anniversary of the original dedication. According to the BHEC, “In the names of Addie Mae, Carole, Cynthia, Denise and Anne, we will rededicate our efforts to recognize hate in all forms and educate in order to eradicate the injustices that still exist and plague our society today.”