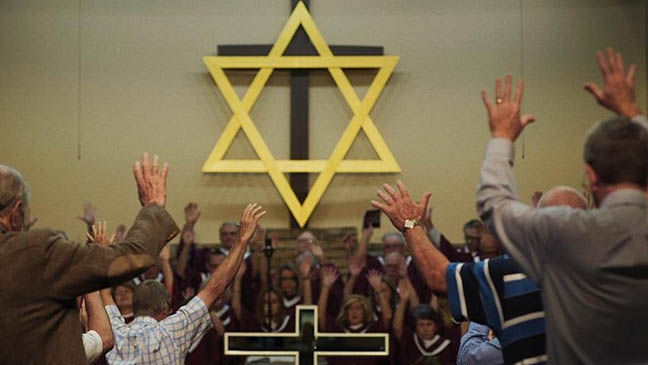 A still from the PBS documentary “Til Kingdom Come.” Credit: PBS.

(CAMERA.org) — A documentary critical of Israel and its Christian supporters in the United States scheduled to appear on PBS stations on March 29, the second day of Passover, includes a fake quote attributed to former U.S. President Donald Trump.

The fake quote falsely suggests Trump supported the annexation of the entire West Bank into the state of Israel. To achieve this impression, the film splices words Trump said in the latter parts of a January 28, 2020 press conference into a statement he made at the beginning of the same press conference. (More details below.)

The film, titled “’Til Kingdom Come,” produced and directed by investigative journalist and filmmaker Maya Zinshtein, depicts an “unholy alliance” between pro-Israel Christians in the United States and Israelis living in the West Bank.

The film has received positive reviews and sympathetic coverage in the Boston Globe, the New York Times, the Religion News Service, Ha’aretz, Jewish Insider, the International Documentary Association, and the Jewish Telegraphic Agency,

The fake quote, which was first uncovered by researcher Luke Moon, appears 68 minutes into the 76-minute movie. The film’s audio quotes Trump as saying:

“The United States will recognize Israeli sovereignty over the territory that my vision provides to be part of the State of Israel, including the West Bank described so vividly in the Bible.”

Trump did not say this.

A publicly available YouTube video of the press conference in question shows that Trump said this instead:

“The United States will recognize Israeli sovereignty over the territory that my vision provides to be part of the State of Israel.” (He said this soon after the 14-minute mark of the YouTube video.)

In Trump’s actual statement, there is nothing whatsoever about handing “the West Bank described so vividly in the Bible” over to Israel, although he did say some of these words in later in the press conference when he declared:

“There are many Muslims who never visited Al Aqsa [Mosque] and many Christians and Jews who never visited the holy sites in the West Bank described so vividly in the Bible. My vision will change that. Our majestic biblical heritage will be able to live breathe and flourish in modern times. All humanity should be able to enjoy the glories of the Holy Land.”

In neither one of these phrases did Trump use the word “including.” This word likely came from another section of the press conference (at about 12 minutes and 53 seconds into the YouTube video) where Trump did use this word.

In other words, it appears that the quote heard in Zinshtein’s film includes snippets from three different parts of the press conference.

This is no accident.

To obscure the alteration, the film shows Trump saying the first part of the quote, jumps away to show the audience reaction during the middle part of his statement, and then goes back to show Trump speaking the last section of the fabricated quote.

By using deceptive filmmaking techniques to lend an air of credibility to a fake quote, Zinshtein’s film has taken an expression of hope for Christians, Jews, and Muslims to be able to visit their holy sites in peace and turned it into fodder for a narrative that portrays American Christians supporting a unilateral, non-negotiated land grab in the West Bank.

This is an egregious distortion of the historical record.

One of Many Distortions in Anti-Israel Films

Sadly, such distortions are the hallmark of anti-Israel propaganda films.

A fake quote attributed to Israeli Prime Minister David Ben Gurion made its way into “With God on Our Side,” a 2010 film produced by Porter Speakman, Jr. To his credit, Speakman removed the quote once the evidence was presented to him.

A similar manipulation of the historical record is present in Sut Jhally’s film “The Occupation of the American Mind.” Jhally, a retired communications professor at UMASS Amherst, has refused to correct the record.

The presence of a fake quote attributed to President Trump is probably news to the film’s benefactors. The film was produced with support from Israel Public Broadcasting Corporation, the New Fund for Cinema and TV, the Ministry of Culture and Sport, the Israel Film Council, the Marlene Meyerson JCC in Manhattan, and the Israel Film Center.

Dexter Van Zile is Christian Media Analyst for CAMERA. His work is focused on anti-Israel propaganda broadcast by Christian churches and para-church institutions and the failure of Christian peace activists to address human rights abuses in Muslim-majority countries in the Middle East.