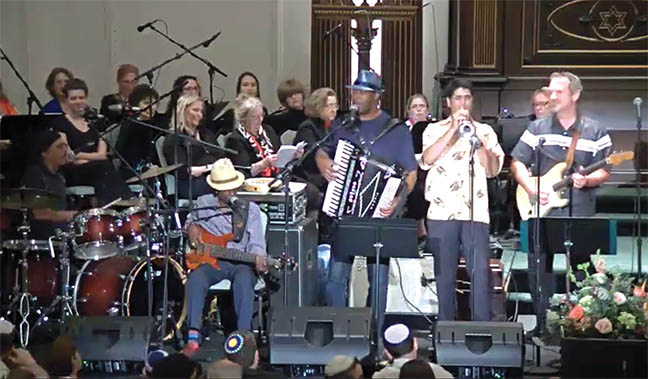 Since 1991, Touro Synagogue in New Orleans has marked the New Orleans Jazz and Heritage Festival in its own unique style every April, holding Jazz Fest Shabbat with the traditional Shabbat evening liturgy set to jazz tunes, with a noted musical guest.

Last year, as Jazz Fest was cancelled due to the rapidly-growing Covid pandemic, Jazz Fest Shabbat was also a casualty and was not held.

While the situation has not improved to the point of having a full sanctuary and performance this year, and with Jazz Fest itself shifting to October, Touro will mark the 30th anniversary of Jazz Fest with the release of “Celebrate! 30 Years of Shabbat Joy,” a CD of Jazz Fest Shabbat musical favorites.

Touro Cantor Kevin Margolius said the Jazz Fest Shabbat committee met last fall to decide what to do for the coming year as, in addition to being a unique, signature event for the congregation, it is also a major fundraiser for Touro.

He suggested that instead of just doing a Zoom event, they do something completely different and come out with an album, “something that would give us a way to honor this tradition” and capture some of the music.

Aaron Ahlquist, who is co-chairing this year’s effort with Ellen Kempner, said “we had to do something” to mark the 30th anniversary. Putting out a CD “would bottle some of that magic” from a “unique and special celebration and experience that really doesn’t exist anywhere else.”

The result has been “a fabulous project, very different from anything we have done before,” Margolius said.

The album, which will be released at the 7:30 p.m. Shabbat service on April 30, will feature Margolius and the Panorama Jazz Band, with many past Jazz Fest Shabbat musical guests, including Kermit Ruffins, John Boutté, Sunpie Barnes, Dr. Michael White, and Grammy Award winners Louis and Andre Michot of the Lost Bayou Ramblers.

“Some of our guest artists are doing music that they were part of when they were at Touro for Jazz Fest Shabbat, some of them we asked to do new things,” Margolius said.

“During this most unusual year, I am thrilled that Touro has undertaken such a joyous project,” said Lisa Herman, president of Touro Synagogue. “’Celebrate! 30 Years of Shabbat Joy’ captures the magic of Jazz Fest Shabbat in an album that is uniquely Touro and will serve as a keepsake for generations to come.”

The album is being produced by Academy Award winner Donny Markowitz, a Touro member. A New York native, Markowitz played bass for Speedo and The Cadillacs, performing at numerous celebrated venues.

He co-wrote the Academy Award winning song “I’ve Had the Time of My Life” from “Dirty Dancing.” He then moved to Los Angeles, where he wrote scores for film and television, including “Get Out,” “Crazy Stupid Love” and “The Muppets.”

In 2011, Markowitz moved to New Orleans, and works from Esplanade Studios in Treme. He produced “Decisions,” an album by Bobby Rush, which featured Dr. John on a song co-written by Markowitz and Carl Gustafson. The album was nominated for a Best Blues Album Grammy.

The recording sessions took place over three days. In selecting the musicians and pieces, Ahlquist said they emphasized “uplifting” past participants, as well as the Panorama Jazz Band, “when they are having a hard time” because Covid has taken away most opportunities to perform.

The performers all said “things are tough these days,” Margolius noted. “There aren’t many opportunities for musicians.” In all, over 40 musicians were involved in creating the album.

Having so many past cantors participate also shows “Jazz Fest Shabbat is much more than one person leading a prayer service,” Ahlquist said.

Jazz Fest Shabbat was born in 1991 when Cantor Steve Dubov invited guest musicians to take part in Shabbat services. The first year, the New Orleans Klezmer All-Stars were featured. Ben Schenck, a founding member of that group, is now clarinetist and bandleader of the Panorama Jazz Band.

The service is held on the first Shabbat of Jazz Fest, except on the rare occasion, as happened in 2016, when Passover began on that night. That year, Jazz Fest Shabbat was on the second weekend.

Explaining the service to someone who has not been there has always been a challenge. “You had to be there,” Margolius asserted. “We’ve had to do a lot of telling instead of showing,” and the CD will help people understand the blend of liturgical music with a New Orleans sound. Of course, the CD won’t come with the dancing in the sanctuary.

The headliner generally does a mini-concert in the middle of the service. In recent years, the headliners have been asked to take more of a role during the service itself. For example, the Lost Bayou Ramblers, who headlined the most recent in-person event in 2019, did a version of “Mi Chamocha” in Hebrew and French, to the tune of one of the tracks on their most recent album.

About 15 years ago, the Panorama Jazz Band became the house band for Jazz Fest Shabbat, and a core of regular jazz-infused liturgical pieces has been developed over the years.

The Mardi Gras Indians came marching in one year to kick off the event. Another memorable moment came in 2010 when Paul Shaffer, David Letterman’s band leader, was in attendance the year that Allen Toussaint was the featured artist. Toussaint called Shaffer up to perform with him, and he joined in on keyboards for “Adon Olam,” which is done to the tune of “When the Saints Go Marching In.”

There is usually a patron’s dinner before services. This year, patron levels include dinner and wine from Saba, picked up on April 30 for enjoyment at home. Patrons that signed up by mid-March are recognized in the liner notes. They will receive a physical CD and a digital download, and the CD will also be available for all to purchase. The CD is $18, plus $3 shipping.

Ahlquist looks forward to the in-person event returning. He said the biggest crowds of the Jewish year generally are for the High Holidays, a somber time of introspection. Jazz Fest Shabbat is a rare contrast, which “fills that sanctuary to bursting at the seams with joy and celebration… We don’t have many of those moments.”

In addition to the dancing, Ahlquist said being there shows “the power of the music moving people to tears.”

Jazz Fest itself has moved to Oct. 7 to 18 this year, figuring that by then it will be possible to have in-person festivals again. Touro hasn’t decided whether to have a fall Jazz Fest Shabbat, because it is a huge event that would be taking place right after the High Holy Days season.

When Margolius was interviewing for the position at Touro, he spoke to several of the congregation’s past cantors. “Every single one of them talked at length about Jazz Fest Shabbat, how they’d never seen anything like it, it’s such a gem,” and said “you’ll never get it until you see it once.” He recalled that “My first year here, it was really a special night.

“After two years off, we’re all really looking forward to celebrating like that again.”

For information about the album, go to jazzfestshabbat.com.