CJFS honoree Goedecke: Agency is there for the entire community 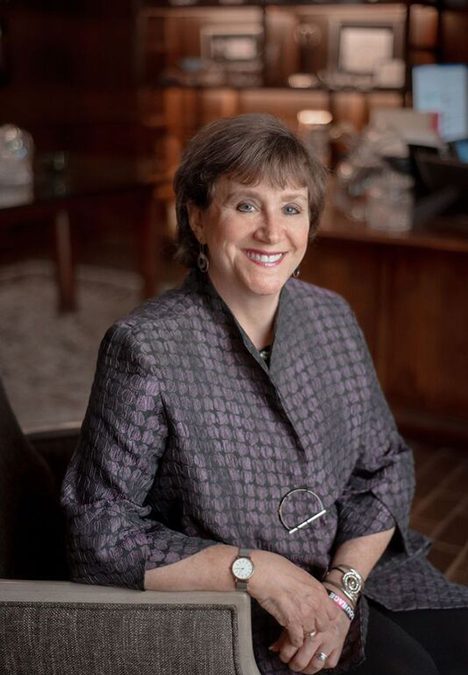 As this year’s honoree for the Collat Jewish Family Services Hands Up Together gala, Nancy Collat Goedecke wants to emphasize the role CJFS plays in meeting the needs of older adults and their families when challenges arise.

Goedecke explained that her grandmother was just shy of 100 when she died in 1999, “and she could have really used the services of CJFS. Honestly, my family at that time didn’t really think CJFS was for us.”

In time, she also learned firsthand about the difficulties faced by family caregivers. As her mother, Patsy Collat, suffered with Alzheimer’s disease, Goedecke saw her father, Charles Collat Sr., at first try to provide all of her care himself. “Family caregivers are so important, and it’s critical that CJFS is providing care and support for them as well as for their loved ones,” she said. “There is a great need for older adult services, and the sooner the community wraps its arms around this issue, the better off we will be.”

Chairs for the virtual event on May 13 are Marjorie Perlman and Emmett McLean, and the event’s honorary chair is Charles Collat Sr.

“Nancy has always been so generous in giving of her time and resources for so many worthy organizations, especially CJFS,” McLean said in explaining his desire to co-chair the event. “You can always count on Nancy to help, so honoring her was an easy decision for me, to show my appreciation for all that she has done.”

“As a member of Nancy’s executive committee when she was CJFS president, I learned so much about leadership in the non-profit world,” Perlman said. “She is a motivator and a visionary who is not afraid to get her hands dirty — and we also share a mutual love of red wine, and love/hate relationship with golf.”

A Birmingham native, Goedecke is CEO and Chairman of Mayer, one of the nation’s largest wholesale distributors of electrical products, equipment and lighting. She is well-known in her industry, and in greater Birmingham, as a leader and philanthropist.

In 2015, she was the first woman to chair the United Way of Central Alabama’s annual campaign; that highly successful, $38.8 million effort.

Tickets to the 5:30 p.m. virtual gala are $100, with proceeds going toward CJFS programs that benefit older adults. Sponsorship levels are also available. Information is here.