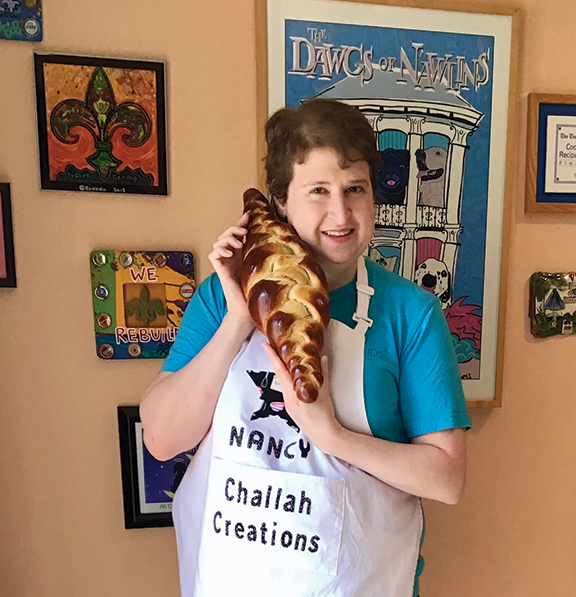 Nancy Pesses didn’t plan on getting into the challah business when she returned to New Orleans last summer, but popular demand keeps the kitchen humming each week.

Challah Creations By Nancy has been putting out challahs and other holiday-themed Jewish baked goods each week, developing a following locally and around the country for her colorful and uniquely-flavored braids.

She also introduces New Orleans into her selections, with bourbon pecan praline and King cake challahs.

Among the special shapes she has done are turkey-shaped challahs for Thanksgiving, menorahs for Chanukah, trees, advocacy ribbons and a cinnamon-sugar baby bottle challah for a gender reveal party.

There is a definite chocolate emphasis because “my family and friends are definitely chocolate fiends,” she said.

She rotates the flavors, coming out with a menu every Monday. Orders can be picked up each week in Metairie, or shipped nationwide. To ensure freshness, the national orders go out on Mondays.

A veterinarian, Nancy had wanted to come back home to New Orleans after several years of advanced training. She went to Grenada for veterinarian school, finishing her fourth year at Louisiana State University. She did a rotating internship in Tampa, then at LSU, then at Auburn for another year in oncology.

Before she went home, her mother, Gail, sent her a copy of a cookbook, “The Modern Jewish Baker” by Shannon Sarna. “At that time, everybody and their mother was also baking” because of quarantines, she said.

In July she returned to New Orleans as her mother was recovering from Covid. After three years of being on call 24 hours a day, seven days a week, Nancy planned to relax for a month or two.

She wanted to start baking as a way to unwind, but there was a national shortage of instant yeast, and she could not find it anywhere. Gail, who had wanted to do some baking but hadn’t yet, said she had bought some one-pound bags of yeast before the pandemic but hadn’t used any.

Nancy was off and running. “I first went through babka, pita, bagels, all of those were in the book.” She then turned to challah, and while it wasn’t as involved as many of the other recipes, “it was the right fit.” She started looking at how others on Facebook and Instagram were doing creative shapes and flavors, and figured “I have ideas, I could totally do this.” 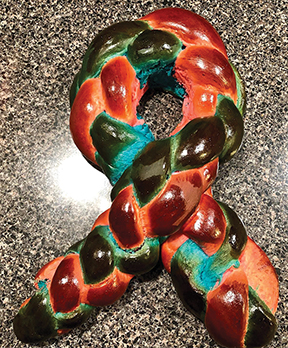 “Previvor” ribbon challah to represent those with the BRCA gene mutation, with pink for breast cancer and teal for ovarian cancer.

By September she was making more bread than they could eat, so she started giving it to family and friends. “People were telling me in August and September that I should sell this… I don’t know anything about business, I’m a vet,” she said.

She decided to offer challah for Rosh Hashanah, and it was “huge.” She spent three 10-hour days filling all the orders, with apple and honey, Oreo, pesto and goat cheese flavors, along with traditional challah.

“Everyone said keep doing this,” Nancy said, “so I took my experience and ran with it.” She officially launched Challah Creations By Nancy in October.

In November, she donated to Sharsheret, an organization her mother knew about that supports Jewish women with breast or ovarian cancer.

She would soon learn a lot more about that organization, as not long after, Nancy found out that she carries the BRCA1 gene mutation, which more common in Jewish women and leads to a much higher risk of breast cancer. This month, she is donating to BRCAStrong, “because they have supported me” through the process of learning about the mutation, the possibility of risk-reducing surgery and how to navigate the diagnosis.

“Outside the Jewish community, or if you don’t have a family member who has it, you don’t know what it is,” Nancy said. She plans to use her challah baking as a platform to educate others about BRCA1, and tell her story.

She has found that baking challah “has become one of those cathartic, stress relieving, anxiety relieving activities.”

When Purim approached, there was a demand for hamantaschen. As Passover came, she did homemade macaroons and other Passover desserts including chocolate-covered “matzah crack” — and then the week during Passover was very quiet.

Though there is nothing blatantly non-kosher in her products, the challahs are not under rabbinic supervision.

While spending a lot of time baking, she hasn’t left the animal world behind. Two or three days a week, she does “mostly relief veterinary work,” while running the challah business on social media and through her website. “I’ve found a nice balance… I like using my science side and my knowledge in helping pet owners, and I also like making people happy and making good food.”